The Hole In The Ground 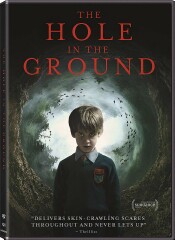 Hollywood just can’t seem to get enough of kids doing creepy things and the parents believing their child has turned into some kind of monster.  We’ve seen these films before, and to be honest, aside from The Omen and Children of the Corn, I can’t think of any other films in the “Bad Children” sub-genre that have made much of an impact on me.  This week I’ll be reviewing two of them, and the first happens to be The Hole in the Ground.  The major turnoff I have towards these kinds of films is that they play it too safe.  It seems these movies tend to avoid crossing certain lines, and, well, that’s frustrating. After all, these tend to be horror films, and isn’t that the point, to make your audience squirm with unease and have genuine dread?  It’s only a movie; it’s OK to be a little provocative in the name of entertainment. The films Children Shouldn’t Play With Dead Things and Come Out And Play pushed the envelope and were memorable for this, but unfortunately they didn’t have a gripping story to back up what they were doing.  So where does The Hole in the Ground fare?  Well, a lot better than I expected, but it missed out on some great opportunities.

Sarah (Seana Kerslake) and her son, Chris (James Quinn Markey) have recently moved to the Irish countryside as a way to give their lives a fresh start.  From the looks of their new home, one would be surprised it was capable of have running water and electricity; it looks like a proper place to set a haunted-house film.  With the exception of a random spider, the interior looks modern and homey.  The start of the film mostly sets up the relationship Sarah has with her son. It’s a sweet bond the two share, and because it’s a horror film, we know this sweet bond won’t be lasting much longer.

It’s when Chris randomly disappears one night that things begin to change.  I’m not a parent, but I’m pretty sure as the scene plays out where Sarah is looking for her son is a parents worst nightmare, but thankfully her panic doesn’t go on for too long, as Chris seems to reappear in the home as though nothing has happened.  It doesn’t take a genre fan to know what comes next.  The following days Sarah seems to notice some slight changes in her son, and to add to the creepy vibe there is a strange older woman who shuffles her way into the middle of the road at one point and declares that Chris is not Sarah’s son.  Are these the ramblings of a crazy lady, or does she know what’s really going on?  The answer to this I feel was too easily taken care of, as it attempts to add another layer to the story but instead feels like just another checkpoint for the filmmakers to use in the genre stereotype.  For a good portion of the film that is what it feels like — just them making your typical scary-kid film with nothing interesting to add.  This is frustrating, because though the cast is filled with relatively unknown actors, everyone puts in some really good performances, and the atmosphere created from the music and cinematography elevates this film as well.

As for that “hole in the ground” that the film is named after, well, first let me say that simply calling it a hole is underselling the massive size of this crater that happens to be in the middle of the woods.  The trips to the “hole” have this Invaders From Mars kind of vibe to it, which is pretty cool, since I grew up loving the 1986 Tobe Hooper version. But the “hole” is more of an afterthought in this film up until the third act, and really that is when this film takes a much needed shift, and the film improves because of it.

The film I kind of see as a metaphor for when a parent seems to watch their kid change in front of them, evolving from being that loving child to at times the hormonal, puberty-stricken teen (granted, a more extreme change). While the film mostly doesn’t offer up anything different in the story department, it definitely has a more atmospheric tone going for it.  Not to mention that the confrontation that eventually occurs between the mother and son along with everything that follows is definitely worth watching.  If you’re a fan of horror and have a weak spot for this sub-genre, then I’m sure you’ll have some fun with this, but keep those expectations low.

Brent Lorentson is a horror writer and film critic based out of Tampa, Florida. With a BA in Digital Film, he co-wrote and co-directed Scavenger Hunt. His short stories have appeared in various horror anthologies. In 2019 his short script Fertile Blood will be a part of the anthology horror film Slumber Party. He is currently working on his first novel A Dark and Secret Place set to be released in late 2019. Favorite Films: Taxi Driver, Fight Club, I Saw the Devil, The Wild Bunch, Dawn of the Dead, A Clockwork Orange, Pulp Fiction, Heathers, The Monster Squad, and High Fidelity.
Justice League vs.The Fatal Five (UHD Blu-ray) (4K) The Prodigy (Blu-ray)