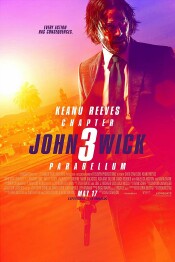 “Fourteen million dollar bounty on his head. Every interested party wants a piece of it. I’d say the odds were about even.”

The word “Parabellum” acts as a double entendre for the film. First there is the obvious reference to a 9mm parabellum bullet, and then there is the Latin phrase, “Si vis pacem, para bellum,” which translates to “If you want peace, prepare for war.” That is exactly what Keanu Reeves gives to those interested parties looking to cash in on the bounty on his head. Picking directly after the events of Chapter 2, Winston (Ian McShane) grants John Wick a one-hour head start after he violates Continental rules and kills crime boss Santino D’Antonio on hotel grounds. Now excommunicated with a 14-million-dollar bounty on his head, John is the target of every member of the criminal underground of New York. Cut off from resources and without protection, the most anyone can hope to survive is a hour or two; however, John Wick is not most people. His attempts to stay alive lead him along the streets of New York City to the sandy dunes of Morocco. All while attempt to stay one step ahead of his pursuers, including the High Table that he used to serve.

The grace period is certainly over, and the film wastes no time getting to the action, especially when a certain basketball player making a cameo appearance tries to jump the gun and is dispatched in a most inventive way. I give the series major points for the creative ways that Wick uses to kill his enemies. I mean, we heard in the first film that he was the kind of man who could kill three men in a bar with a pencil, but in this film, we are made believers, as he turns virtually anything into a weapon. And I mean anything. Fight choreography is something that this franchise has always excelled. Parabellum is no exception, and this time it’s not just Keanu who’s kicking ass; Halle Berry gets in on the fun.

Now when I heard Halle Berry was coming aboard, I had a mixed bag of emotions as I wondered what kind of character she would be portraying. And when I found out that she was going to be a fellow assassin from Wick’s past, I had my doubts, as this would require a different physicality than we are used to seeing from Halle, but she nailed it in my opinion. I dare say that she proved herself to be nearly as lethal Keanu. I believe the pair doing most of their own stunts is why this worked so well. It was no surprise that Keanu would be doing his stunts, as that has been his approach for the previous films, but I think Halle’s decision to follow suit was the best decision for her character. It made her fatigue and intensity more realistic, as her character is understood to have been retired from that aspect of the life for some time. I do feel that her story arc was incomplete, as there are details of her past and relationship with Wick that are only hinted at. I would have liked to have had more context in this regard. That aside, Halle’s character was more what I hoped for.

This is not to undercut Keanu’s contributions to the film, which are extensive. From the first seconds, he is high in energy and tempo, as he should be given the threats he faces. In the world of action stars, he is raising the bar with the martial arts ability and gracefulness of his fight sequences. There is another martial arts legend in the film, Mark Dacascos, who leads a pack of samurais on the hunt for Wick. His fighting ability remains formidable, giving Keanu a run for his money, but seriousness of his character is undercut by cheesy gimmicks that are designed to draw comic relief, something that ultimately works against the film.

In the first film, we dipped a toe into the criminal world that John Wick was formerly a part of. In Chapter 2, we were waist deep, but in Parabellum we are fully underwater, as we are treated to a real look behind the curtain at how extensive this worldwide criminal underworld reaches, starting with a glimpse at John Wick’s origins and his real name. Next, we meet High Table representative the Adjudicator, and the authority that she wields over not only Continental manager, Winston, but the Bowery King as well, and leading straight to the ironically bureaucratic way contracts and other business are conducted. Though this does lead to some bittersweet endings for certain beloved characters as well as demonizing of others, it was still good to get an understanding of the world we are being brought into. It gets a bit hokey in the middle, but it remains interesting throughout.

Though I enjoyed most of the fun, the lackluster ending undercut a lot of affection for the film. I acknowledge it was a welcome addition to the franchise, but I was expected a better conclusion for the film. It remains open-ended, but the story is beginning to lose substance, as there is very little to begin with in this film. The substance is replaced by wall-to-wall action that is enjoyable, but the characters’ motivations are beginning to wane. Too many more additions and the series will become as unrecognizable as the Fast and the Furious franchise.

This is the likely contender to unseat Endgame from the number one spot in my opinion. The action-packed film is guaranteed to draw every red-blooded man to the theaters, and perhaps a few women who will have a hero to root for as well. Keanu and Halle are a lethal team, and if you don’t get too invested in the ending, a good experience will be had.

Jeremy Butler is a film school graduate of the International Academy of Design and Technology. He is been writing for Upcomingdiscs since 2012; however, movies have played a big part of his life for much longer. Favorite genres include horror, science fiction/fantasy, and comedy. Favorite movies are V for Vendetta, Boondocks Saints, Kiss Kiss Bang Bang, and The Godfather.
How to Train Your Dragon: The Hidden World (UHD Blu-ray) (4K) A Dogs Journey