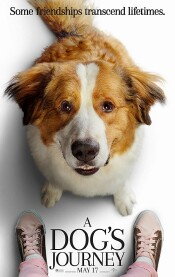 The life of a dog can be very short, but the dog’s purpose can last you a lifetime. A Dog’s Journey is a wonderful sequel and extends the story even further, grabbing your heart making it spill over with emotions. This story picks up shortly after where the first one left off. Bailey (voice Josh Gad) is a little older, and Hannah’s (Marg Helgenberger) son died, leaving his wife Gloria (Betty Gilpin) and a toddler Clarity June (Emma Volk) behind. Trying to help Gloria with the baby, Hannah and Ethan (Dennis Quaid) are doing their best to provide for them both. Being so young, Gloria seems to be preoccupied by trying to find a life for herself that tends to allow little CJ to wonder off. Sometimes it can be a little dangerous on a farm for a toddler. Bailey being the loving and protective dog that he is does his best to help keep CJ from harm. But after an incident, Ethan and Hannah offer to take care of CJ so Gloria can take a job far from home.

Gloria begins to not trust Ethan, and Hannah and decides to move from the farm far away. With both CJ and Gloria now gone, Bailey senses that he is needed elsewhere, and the story begins with his journey to find a way to protect CJ (Abby Ryder Foster and Kathryn Prescott) throughout her lifetime.

Director Gail Mancuso does a fantastic job telling this story. She includes every detail, that along with a few things that might not seem realistic, enable her to pull it all together nicely. Gail also did her research and includes some areas that help bring hope to the story and allow the characters to realize things they did not see before. The adventures that are presented throughout the storyline help develop the trail that is needed to bring out the eventual conclusion.

It’s a wonderful tale that definitely will grab the heart of any true dog lover. But I also feel that this narrative is a very special story for all to see. I suggest you see the film at local theater, as the cinematography on the big screen helps make the film a winner.

I based my grade on the special adventure that is waiting for you all to experience and the storyline you will never forget.

Gino Sassani is a member of the Southeastern Film Critic's Association (SEFCA). He is a film and television critic based in Tampa, Florida. He's also the Senior Editor here at Upcomingdiscs. Gino started reviewing films in the early 1990's as a segment of his local television show Focus. He's an award-winning recording artist for Omega Records. Gino is currently working on his 8th album Merchants & Mercenaries. Gino took over Upcomingdiscs Dec 1, 2008. He works out of a home theater he calls The Reel World. Favorite films: The Godfather, The Godfather Part II, The Body Snatcher (Val Lewton film with Karloff and Lugosi, not the pod people film), Unforgiven, Gladiator, The Lion King, Jaws, Son Of Frankenstein, The Good, The Bad And The Ugly, and Monsters, Inc.
John Wick 3: Parabellum 13 Reasons Why: Season Two