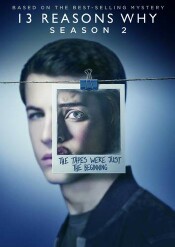 “It’s been five months since Hannah Baker killed herself. We never thought this trial would happen. We thought we could move on. But when I got called to testify, all of a sudden it made me realize we can’t move on. Life is different now.”

And that’s pretty much the best way to sum up the second season of Netflix/CBS teenage drama 13 Reasons Why. The series started out as a novel in 2007. It didn’t catch the world on fire and went largely unread until something appeared to cause the novel to pick up steam in 2011. It hit the New York Times Best Seller list and started to become a teen phenomenon around middle and high school campuses throughout the nation. If Harry Potter didn’t provide enough proof that kids were still reading and doing it for their own enjoyment, this novel should do the job. There are no wizards or superheroes or distant alien worlds to explore here. The work is a very straightforward drama about some of the topics that real-world teens deal with every day. Nothing is really taboo here; from cyber-bullying to rape, it’s all covered. It’s even possible this particular work has saved a few lives over the years. Suicide is the number two cause of death among teenagers these days, and this teen drama doesn’t shy away from the circumstances that might lead a young teen with their entire life ahead of them to a tragic and irrevocable decision.

The series debuted to more than a little controversy. There were groups and critics who condemned it because they believed the film glamorized the act of suicide. It’s not that the concept was completely meritless. The first season dealt with the aftermath of the suicide of a high school girl named Hannah Baker (Langford). She committed suicide pretty much right before the series’ first episode takes up the story. The focus of the series is Clay Jensen (Minnette), who has received a mysterious package at his doorstep. Inside there are seven cassette tapes and a map of the town. These are recordings that Hannah made before she killed herself. Each side is dedicated to a person whom she blames for her suicide. There are 13 sides in all. Each person is instructed to listen to the entire set and then pass them along to the next person on the list. Clay is number 11. Of course, in 2018 it’s not quite so easy to find a player for cassette tapes anymore. Of course, that was part of the plan. Hannah wanted the exercise to be anything but easy. Unlike those who came before him, Clay is struggling with the things that he hears. He is taking a long time to reach the end. This works out great for the series, as each of the first season’s 13 episodes focuses on a side of the tapes. Hannah warns that the listeners are being watched, and if anyone breaks the chain or fails to listen to them completely, a copy will be released to the public, and potentially the authorities. Throughout that first season Hannah gets to put the entire small town of Liberty on edge. It appears to be a lot of power generated by the simple act of killing herself. But as you looked deeper into the stories that were told that year, you begin to see another story emerge that’s not quite so heroic. The critics didn’t really give the show enough time before the protests started.

Of course, these protests did leave a mark on the series for Season 2. The first episode begins with a 60-second PSA from the cast of the show letting people know where they can get help. The series also created its own web site where teens can find the resources they need if they are struggling with any of the graphic issues or emotional trauma found in the show. While it was initiated by these protests, it’s a good thing for the show to be associated with, and hopefully it will actually save some lives. What more can you expect from a television series?

“The tapes were just the beginning.”

After the first season I was interested in where the show could go from there. The format of each episode focusing on a side of the tapes was a unique presentation and pretty much defined the series. Now the tapes have been heard. So the focus shifts to what for the sleepy town of Liberty must appear to be the trial of the century. Hannah’s parents, played by Kate Walsh and Brian de Arcy James, are suing the school district for turning a blind eye to the bullying Hannah was subjected to. As each of the principle characters testify, the episodes are now driven by their experiences both now and during Hannah’s difficult days. Each episode is narrated by a different character, and as you may expect, each has a somewhat different viewpoint about what they experienced. This is the kind of thing I used to show to my law students to demonstrate bias, which exists in everyone’s recall. So each character gets a chance to shine, and the show continues with the flashbacks of Hannah’s last days, and often an event we encountered in the first season is presented from a different perspective.

Still, Clay Jensen (Minnette) is the focus of the story. He loved Hannah but had a rather awkward relationship with her and has only truly understood his own feelings in retrospect. He continues to flashback to those days, but this time he begins to imagine that Hannah is in the room with him. He interacts with her “spirit”/hallucination and attempts to work through his complicated feelings with the dead girl.

The show also gives us a bit of a standard drama mixed into these tape-related moments. Hannah’s parents are suing the school district for not doing enough to stop the bullying, and Clay’s mother ends up the attorney who represents the school. Kate Walsh and Brian d’Arcy James do a rather nice job of portraying the grief-stricken parents who are looking for answers in the wake of the tragedy. There are also the other culprits who have done things of varying degrees of severity to Hannah and who have a vested interest in seeing the story die with her. So there are threats aimed at those who are going to testify. Much of the series time is spent exploring these threats. Of course, the one who has the most to lose here is baseball star Bryce Walker, played by Justin Prentice. He has quite the collection of sins he needs to keep secret or he loses his rather comfortable and popular life. Protected by his own athletic followers, he is trying to protect the secrets of a hidden clubhouse the jocks used to party and take advantage of girls. Of course, they are also stupid enough to take pictures of each of these messed up conquests.

That’s where the show attempts to direct the tapes motif from the first season. This time Polaroids from these misdeeds show up throughout the series, but not one per episode like the tapes. Even with all of the focus on them, the pictures end up being more of a red herring throughout the show and play very little of a part in the climax. If you liked the first season, you’ll still get the teen drama and angst that drives shows of this nature. The format change doesn’t really change the narrative as much as you might expect.

There are graphic episodes, and the final episode depicts a rather graphic assault that will not be easy to watch. The cliffhanger season finale will also stir up some emotional things about the recent rash of school shootings. Next season Langford is not expected to reprise her role of Hannah. She’s moving on to film roles after scoring a small part in Avengers: Endgame that was unfortunately cut from the theatric showing. I suspect it’ll be on the video release. So it will be interesting to see if the show can survive without the ghost of Hannah Baker to haunt each of these damaged characters. She’s truly gone now, but for most of these characters, “It’s about to get worse.”

Gino Sassani is a member of the Southeastern Film Critic's Association (SEFCA). He is a film and television critic based in Tampa, Florida. He's also the Senior Editor here at Upcomingdiscs. Gino started reviewing films in the early 1990's as a segment of his local television show Focus. He's an award-winning recording artist for Omega Records. Gino is currently working on his 8th album Merchants & Mercenaries. Gino took over Upcomingdiscs Dec 1, 2008. He works out of a home theater he calls The Reel World. Favorite films: The Godfather, The Godfather Part II, The Body Snatcher (Val Lewton film with Karloff and Lugosi, not the pod people film), Unforgiven, Gladiator, The Lion King, Jaws, Son Of Frankenstein, The Good, The Bad And The Ugly, and Monsters, Inc.
A Dogs Journey Independent Film Round-Up: Cam Girl / Ritual: A Psychomagic Story