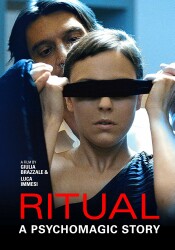 Our good friends at Film Movement and Omnibus Entertainment sent a batch of titles for us to check out at UpcomingDiscs.  For those unfamiliar with the companies, they mostly release independent and art house titles, so if you’re hoping to find out about the next Michael Bay blockbuster, well, this review most likely won’t be for you. With the titles I’ll be talking about here, the subject matter is a bit on the sexy side, but I wouldn’t go so far to say these are titles that belong in the adults-only section.  Both of these titles are also Italian imports, so unless you are fluent in Italian, there are subtitles involved.  So for those who have stuck around, let’s go ahead and get right to it.

This is a title with a 2014 release date, though I’m not sure how long it has actually been around in the States.  The film opens up with Alice (Antonia Liskova), who works in advertising and seems to be good at her job but is unfortunately let go by the company.  The job market is tough, and Alice can’t seem to catch any breaks.  As it turns out, several of her friends have financial troubles, and after hearing some success a friend has in the webcam business, Alice decides that perhaps she and her friends should join together and start a webcam business for themselves.

The plot pretty much seems like this should be a cheesy soft-core porno, but the filmmakers are really attempting something smarter with a touch of girl-power to it.  Unfortunately, this doesn’t work.  Alice seems to be adamant about not exploiting the girls despite what they are doing for money, but it seems the filmmakers can’t help themselves by exploiting their cast.  Seriously, there is a moment in the film where the girls are dancing in the kitchen in bras and panties and the camera seems to only follow the girls and their barely-covered asses.  I’m not complaining, but it just seems a tad hypocritical on the director’s part.

Inevitably things don’t go as planned, and the film dissolves into a bit of a cautionary tale as we see the girls suffer the consequences of living the life of a web model.  This could have worked if the writer and director decided to dig a little deeper and spend time with these characters as they face these repercussions.  Instead they focus more on Alice, who has the most boring storyline in this film.

Another issue I had with the film is it looks to slick; it appears to be over-lit and manages to lack anything that resembles atmosphere.  The look is so flat that it became a constant reminder that this must have been shot on a micro-budget, which isn’t the sort of thing a viewer wants to be thinking about.  This is a film that had potential and has some good ideas, but the execution is simply way off the mark.

This one I have to admit is a bit of a slow burn, but on a technical level the visuals are consistently beautiful from start to finish and reflect how much can be done on a small budget when you get creative with the camera and lighting.  This film is loaded with a lot of sexual tension, and some of it will be uncomfortable to watch as we get to follow the relationship between Lia and her lover, Viktor.

We see how Viktor enjoys showing his dominance over Lia, and for the most part she is a very willing participant, though it’s clear she’s abiding it out of her love for Viktor, not because she enjoys being submissive.  The film takes us along to her therapy sessions with her shrink, who obviously disapproves of her relationship, but she continues to stay out of love.  Though things take a sharp turn when Lia confronts Viktor about wanting to have a child.  This I’ll just say doesn’t go well.

I liked the tension we see in this relationship, where as an audience we can clearly see at any moment the potential for violence is there, and it helps keep us engaged and concerned for Lia.  So when she decides to go visit her aunt in the countryside, we can support this decision; that is, until we find out that the aunt is something between a witch doctor and a healer in her village.

Considering this was a film adapted from a story by Alejandro Jodorowsky (El Topo) I kind of expected things to go a little further off the deep end, but instead the filmmakers manage to keep this firmly grounded in reality, which in its own way allows the film to stay in some bizarre territory.

As I mentioned, this film is a bit of a slow burn to the point it is basically building up to the film’s final scene.  At first I was a little disappointed by this, but the more I got to thinking about it, the more I realized how the film had stuck with me.  Is the film a classic?  Not by a stretch, but for those who are looking for something a little sexy and a little bizarre, then I’d give Ritual: A Psychomagic Story a shot.

Brent Lorentson is a horror writer and film critic based out of Tampa, Florida. With a BA in Digital Film, he co-wrote and co-directed Scavenger Hunt. His short stories have appeared in various horror anthologies. In 2019 his short script Fertile Blood will be a part of the anthology horror film Slumber Party. He is currently working on his first novel A Dark and Secret Place set to be released in late 2019. Favorite Films: Taxi Driver, Fight Club, I Saw the Devil, The Wild Bunch, Dawn of the Dead, A Clockwork Orange, Pulp Fiction, Heathers, The Monster Squad, and High Fidelity.
13 Reasons Why: Season Two Film Movement Round-Up Antonio Lopez 1970 Sex Fashion and Disco & Bosch: The Garden of Dreams