The Secret Life of Pets 2

Posted in: The Reel World by Brent Lorentson on June 9th, 2019 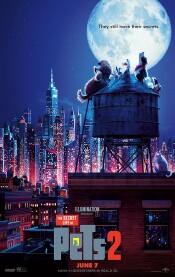 When the first trailer of the Secret Life of Pets film came out I thought that the Illumination and Universal Pictures were onto something.  I think every kid and even adult wonders at some point what their pets’ lives are like when they are not around.  This was what I felt could have been the pet equivalent to the Toy Story franchise.  As it would turn out, the first film started out strong, but for me it quickly fizzled into an absurd storyline.  Kids seemed to like it, and really that’s all that mattered, but personally I felt there was enough strength in the material where we could have gotten something great.  Now we have Secret Life of Pets 2. Does the film manage to pull off something great, or is this a big pile of stale kibble?

The film picks up with Max (Patton Oswalt), a tan and white terrier, and his best canine pal, Duke (Eric Stonestreet) living the life together. It doesn’t take long before things change in a big way.  Their owner gets a boyfriend, and not long after the pair end up having a baby.  We already know Max isn’t keen on sharing affection, so how is he going to adjust to having a new baby coming into his home?  Really, I liked where this could have gone, to get to see a boy and his dog film from the perspective of the dog and just seeing the challenges the puppy has to adjust to this new human in their lives…we get some of that, and then the film takes a twist by the family randomly planning a trip to head out to the farm/woods.

It’s here where two more stories are set up, one with Gidget (Jenny Slate), a Pomeranian who Max asks to take care of his favorite toy while he’s gone.   She manages to lose it, and it ends up inside an apartment filled with cats. The second story is simply absurd with Snowball (Kevin Hart), a pet rabbit who believes he’s a superhero and eventually is tasked with rescuing a caged tiger.  One of these stories doesn’t belong, but because Kevin Hart has made a name for himself this story manages to not just get squeezed into this film but unfortunately takes up a good portion of the film.  Sure, there might be some scenes that induce a chuckle or two, but there is nothing really memorable about this storyline aside from the mildly entertaining cell-animated mock-introduction sequence to Snowball as a superhero.

Back to the countryside; we get to see Max learn how to be a tougher dog and a better guardian with the aid of the farm dog, Rooster (Harrison Ford).  I wish this had time to play out more. Getting to see Max and Rooster together on the farm is really some of the best material here.

Here is the biggest problem. The film isn’t even 90 minutes long. We are given three storylines, and none of them feel complete, and like I mentioned, one doesn’t feel like it belongs in the same film.  Each of the stories manages to revolve around a character that is attempting to be something they are not, Max to be brave, Gidget to be a cat, and Snowball to actually become a hero.  In idea form, these are good character journeys for us to see, but the result is simply rushed and sloppy.  Even worse is how the film attempts to tie all these stories together.

Coming out of this all I could think of is how much I appreciate Pixar when it comes to their storytelling abilities.  For example you look at the first 15 minutes of Up and you have this beautiful story told that evokes an emotional response and not a word is said; In Toy Story they could make an audience cry over a toy.  This film … well, it has a rapping bunny.  Sure, it has some laughs, and it will make plenty of money, but this isn’t a movie you’ll remember and want to return to years down the road.  It’s so frustrating seeing an idea with so much potential being wasted.  If there is a third film to come out of this franchise, please let it be good, and would it be too much to ask for a little heart as well?

Brent Lorentson is a horror writer and film critic based out of Tampa, Florida. With a BA in Digital Film, he co-wrote and co-directed Scavenger Hunt. His short stories have appeared in various horror anthologies. In 2019 his short script Fertile Blood will be a part of the anthology horror film Slumber Party. He is currently working on his first novel A Dark and Secret Place set to be released in late 2019. Favorite Films: Taxi Driver, Fight Club, I Saw the Devil, The Wild Bunch, Dawn of the Dead, A Clockwork Orange, Pulp Fiction, Heathers, The Monster Squad, and High Fidelity.
X-Men: Dark Phoenix Preview Of The Brady Bunch 30th Anniversary TV & Movie Collection