Posted in: Disc Reviews by Brent Lorentson on July 12th, 2019 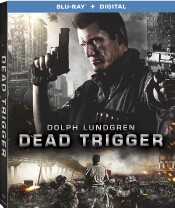 Dolph Lundgren is one of those guys that I enjoy watching and can make a bad action movie worth watching.  Even when he starred in Masters of the Universe, it wasn’t the He-Man I was used to, and it was a B-movie mess, but he pulled off playing the character.  Many love the guy from his performance in Rocky IV, and for me I’m a fan of Universal Soldier, but he never quite reached the superstardom I feel he deserved. Thankfully, decades after his heyday on the big screen, he is still starring in films, though unfortunately a good portion of them are B-caliber action flicks that are simply not taking full advantage of the man’s awesomeness. Dead Trigger is the latest and the newest forgettable film to add to the actor’s catalog.  From its opening moments where it seems to be riffing on Starship Troopers but with zombies, I was certainly hopeful that this could be a fun cinematic romp.  While Lundgren does his best to deliver the goods, it’s everything that surrounds him in front of and behind the camera that seems to be working against him.

We’re quickly introduced to these new recruits who are joining a special government team that has developed a special video game to help find recruits.  The game simulates a zombie infestation that decimates the world, and it just so happens a zombie outbreak is now occurring in the real world.  Well, these recruits are taken into a boot camp. It’s here we get an explanation on what a “Dead Trigger” is; basically it’s a soldier with a low life expectancy. Lundrgren is Capt. Walker, who is tasked with making them battle-ready.  Their training is cut short when a lab attempting to make a cure for the zombie virus is attacked and the general orders them to rescue his daughter (one of the doctors) and anything they can that has to do with the cure.

Thankfully the film doesn’t waste much time with the training, and we see everyone get thrown into zombie territory.  It doesn’t take an expert to figure out that most of these newly trained soldiers are nothing more than zombie kill fodder, but really these characters and their kills are simply forgettable.  Rather than focus on building suspense and trying to be a horror film, instead the focus is on how many on screen kills we can have.  This could be forgiven if it wasn’t for the low-budget effects and the unoriginal kills.

Even if you haven’t seen this film before, you’ve seen a dozen or so like it before, and you can pretty much telegraph how each moment of this film will play out.  This could even be forgiven if an attempt was made to create some atmosphere and build suspense, but the only thing that will leave you on the edge of your seat is how much longer this will go on.  This seems to be a world where no one runs out of bullets, and despite how many times you’re surrounded, despite how many zombies surround you, all you seem to need to do is push people out of the way.

What’s even more frustrating is how the film ends.  I won’t say it, but man, was this a groan worthy one.  If it wasn’t for Lundgren being in this film, I really doubt I could have finished it.  He gives enough weight to the film where he’s worth watching and he was a good investment for those involved, because with any other actor this could have been worse.

Dead Trigger is presented in the aspect ratio 2.40:1.  The 1080p image is arrived at with an AVC MPEG-4 codec at an average of 26 mbps.  The overall look of this film screams that it was shot on a low budget. It’s during some of the night scenes where it suffers the most, where we have noise and compression issues.  The daytime shots look better and crisp, but really there are no moments where I could say the color popped.  We get the detail, almost too much, where we can see that Lundgren is showing his age.  Another issue is with the muzzle flashes and some of the blood sprays which look very fake, and this is distracting at times.

The DTS HD-Master Audio 5.1 track is on par for this release; don’t expect all the bells and whistles.  We get clean dialog throughout and some decent bass at times with the impacts, but this isn’t anything that I’d say blew me away.

While it’s not the worst zombie film I’ve seen, I wouldn’t say this is very good either.  If you’re a fan of Dolph Lundgren, proceed with caution, but really, I find this film hard to recommend.  There are some fun cheesy moments, but simply not enough to save this one.

Brent Lorentson is a horror writer and film critic based out of Tampa, Florida. With a BA in Digital Film, he co-wrote and co-directed Scavenger Hunt. His short stories have appeared in various horror anthologies. In 2019 his short script Fertile Blood will be a part of the anthology horror film Slumber Party. He is currently working on his first novel A Dark and Secret Place set to be released in late 2019. Favorite Films: Taxi Driver, Fight Club, I Saw the Devil, The Wild Bunch, Dawn of the Dead, A Clockwork Orange, Pulp Fiction, Heathers, The Monster Squad, and High Fidelity.
Alan Jackson – Small Town Southern Man Cinderella (1950) Anniversary Edition (Blu-ray)