Posted in: No Huddle by Brent Lorentson on August 1st, 2019 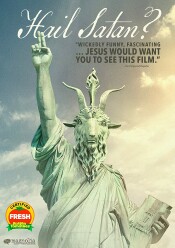 With a title like Hail Satan? you know your film is going to evoke a reaction.  I’m not sure when doing a documentary you really want to polarize your audience, but when you also have DVD cover art of Baphomet, well, then you’re basically taking the ram (in this case) by the horns and just going for it.  One of the core subjects the documentary is covering is about the freedom of expression in regards to having a Baphomet statue erected to stand next to a statue depicting the 10 commandments on government property.  It’s a film that does its best to stay neutral when it comes to religious freedom but in the process becomes a bit problematic for both sides of the debate.  This is one where it got a little frustrating to watch, but I was impressed by how entertained I was throughout it all.

When the film opens up we get to see the leader of the Satanist group, Lucien Greaves, basically trolling the Westboro Baptist Church.  Sure, these antics may be in bad taste, but considering who it’s being done against, it’s hard to sympathize with the Westboro Baptist Church members.  Lucien is basically a self proclaimed rebel who seems to want nothing more than to provoke those who seem to want to use religion as law in how people should act rather than actually following the laws.  We see this on display when the Satanists go on to protest at an anti-abortion rally, as well as when the group attempts to perform a Black Mass in Boston.  Yes, these things are done to evoke a response, and sure, there are many that will be offended by a lot of what’s in this documentary, but there is a message here.

Most of the subjects being interviewed seem to have come from Christian backgrounds and have had situations occur that caused them to see the “unfairness” in their religion and have basically turned out to be a Satanist basically out of acceptance.  Here is something I had a problem with, and thankfully the documentary does spend some time on this. Though they are called Satanists…well, they really don’t worship or even believe in him.  In many ways the group is simply filled with anarchists, but lets face it, Satanist just seems scarier to the average Joe.  But then there is Jex Blackmore; she’s basically so extreme the Satanist group has kicked her out, and well, personally, I felt she was the most genuine subject of the documentary.  Sure, Blackmore is extreme and may say things that may be upsetting for some, but she seems to be the only one who genuinely believes in what she preaches and isn’t about selling shirts or being on TV, and that’s at least something I can respect even if I disagree with her beliefs.

Director Penny Lane does a good job at shining a light onto the debate where religion is involved with the matters of the state.  The core of the story is about the separation of church and state, where a monument of the 10 commandments is to be erected at the Arkansas State capitol, and Lucien is fighting for the Baphomet statue to be erected next to it in fairness.  The pushback from the government officials and the public is a bit of a harsh reminder of how progressive we really are as a country, but it seems as though Lucien can’t help but troll those on the other side, and it makes it hard to believe he even believes what he is fighting for.

My issue still remains on why these people are calling themselves something they don’t even believe in.  A for instance on how it’s difficult to take this seriously: they are having a “prayer” of sorts, but instead of reading from a book, they are reading from cell phones while wearing costume devil horns.  Once the ceremony is over they of course huddle together for selfies…Yeah, not exactly the virgin-sacrificing cults we’re used to seeing on TV or reading in pulp horror stories. And that’s really where Penny Lane succeeds, by showing us that these are not monsters living on the fringe of society, but your everyday citizens who are just looking for acceptance and equality.

Brent Lorentson is a horror writer and film critic based out of Tampa, Florida. With a BA in Digital Film, he co-wrote and co-directed Scavenger Hunt. His short stories have appeared in various horror anthologies. In 2019 his short script Fertile Blood will be a part of the anthology horror film Slumber Party. He is currently working on his first novel A Dark and Secret Place set to be released in late 2019. Favorite Films: Taxi Driver, Fight Club, I Saw the Devil, The Wild Bunch, Dawn of the Dead, A Clockwork Orange, Pulp Fiction, Heathers, The Monster Squad, and High Fidelity.
Alita: Battle Angel (UHD Blu-ray) (4K) Body At Brighton Rock (Blu-ray)