Posted in: Disc Reviews by Brent Lorentson on August 1st, 2019 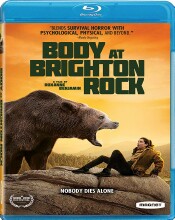 When it comes to Body At Brighton Rock, there was an opportunity for this to be something pretty awesome.  After all, when you think about it, only a few years ago The Revenant was showing just how great a film can be about surviving in the wilderness and how intense a bear attack can be.  Well, to be fair, I don’t believe Body At Brighton Rock was aiming to be in the same ballpark of The Revenant, but as I was watching this, it was difficult to not think about what could have been.  Really, the film is a simple little tale about a state park employee who gets lost in the woods and stumbles upon a dead body in the process.  It’s a good start for the film, but sadly this turns into a bit of a snooze-fest despite some spurts of promise.

When we meet Wendy (Karina Fontes), she’s already late for work, something she seems to do quite often.  She works for the State Park Service, which seems to have more people on duty than I would have guessed.  Wendy from the start just doesn’t seem to be right for the job. Even her coworkers can’t help but make jokes at her expense.  But to help a friend out, she decides to swap positions with her, so rather than sticking to the indoors, Wendy sets out on the trails to post signs and do whatever it is a Park Service officer does.  It doesn’t take long before she gets lost, and in the process of trying to find her way she stumbles across a body.  Sure, I can believe anyone can get lost in the woods, but when it comes to Wendy’s abilities in the wild, well, it’s hard to believe she’d ever be hired not knowing simple basic survival skills.  Another frustrating aspect: she’s carrying around a pack just for the specific purpose of helping keep her alive in case of emergency, but it seems nothing you would actually need is in this pack.

I wish I could say things get better, but then the film attempts to swerve in horror movie territory by having Wendy constantly believing the body isn’t quite dead, and that it is coming after her.  Doing this once, OK, it’s cheesy, but I can forgive it; but they pull this gag a few times, and despite attempting to change it up and even attempting to throw in a twist, it simply doesn’t work.  There’s simply no tension in this entire film, and with the character’s ineptitude, she’s kind of hard to sympathize with.

By the time the confrontation occurs between Wendy and the bear, we’re supposed to believe that over the course of the night she’s somehow evolved as a character, but as an audience we know better.  The stakes never feel elevated in this film. There are so many great survivalist films out there this film could have borrowed from, and it would have been better for it.  I mean, seriously, a park ranger struggling in the woods for 12 hours alone…that doesn’t elicit anything more than an eye roll.  This film even purports to be survival horror on the cover, and this just isn’t what we get.  It would be more terrifying to see Paul Blart: Mall Cop 3 trapped in a mall overnight than what is put on display here.

If this was simply a movie of the week that wasn’t attempting horror, perhaps I could look more kindly upon this.  I like Karina Fontes, and the director Roxanne Benjamin does show some promise, but again I have a hard time considering this horror or even tossing it into the thriller category.

Body At Brighton Rock is presented in the aspect ratio 1.85:1.  The 1080p image is arrived at with an AVC MPEG-4 codec at an average of 30 mbps.  A good portion of the film is set outside, so a lot of the exteriors seemed to be shot in natural light, which works nicely because the scenery is nice to look at.  The greens may not be as lush as you’d expect, but the exteriors still look good.  At night, though, we get some slight noise issues, and blacks are crushed in the process, but overall it still looks good, especially for an independent production.

The DTS HD-Master Audio 5.1 track is a bit of a mixed bag. The score is the first thing that jumps out at me and at times can be overbearing.  As for the dialog, most of which is at the start of the filmit comes through crisply.  As the film gets to where Wendy is alone in the woods, there is a lot of toying around with ambient noises and the use of foley work.  While it gets the job done for telling the storyI feel the sound work was a missed opportunity to develop some real atmosphere and tension which is lacking in the film.

(Audio Commentary with Director Roxanne Benjamin and Actress Karina Fontes) For those who enjoy listening to commentaries, this one is a fun one to listen to. The women share a nice chemistry together and keep the conversation informative without any dull spots.

A Wild Place to Film: (2:48) Discusses filming the story in Idyllwild, CA.

Working With A Bear: (4:20) Really this was my favorite featurette, as we see how the bear was trained for his scenes in the film.

It’s not a horrible film, and it does have its moments where I liked it, but really, this one just left me disappointed.  If you can catch it on Netflix or Prime, it’s worth checking out, but I’m not sure how many would actually clamor to have this in their collection.

Brent Lorentson is a horror writer and film critic based out of Tampa, Florida. With a BA in Digital Film, he co-wrote and co-directed Scavenger Hunt. His short stories have appeared in various horror anthologies. In 2019 his short script Fertile Blood will be a part of the anthology horror film Slumber Party. He is currently working on his first novel A Dark and Secret Place set to be released in late 2019. Favorite Films: Taxi Driver, Fight Club, I Saw the Devil, The Wild Bunch, Dawn of the Dead, A Clockwork Orange, Pulp Fiction, Heathers, The Monster Squad, and High Fidelity.
Hail Satan? Penguin Highway (Blu-Ray)