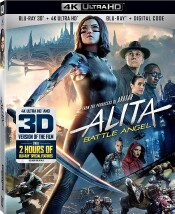 “The fall of the worlds, it was the war to end all wars. There was no one left to fight, no war memorials, no wall with the names of the dead, no statues of heroes. Only empty cities and the ruins of great civilizations on two planets. Tumbleweeds, skulls, crows. Only in Zolem did the lights stay on.”

I was unfamiliar with the original source material. I found myself treated to a unique action-packed experience. Alita is unquestionably one of the top action films of 2019. I know it’s early, but I have no reason to doubt that my claim will be just as true as the year continues. I would have liked it a bit more if they expanded on the universe slightly more, but it was still a solid opening for the inevitable franchise. By the year 2563, the world has been ravaged by a catastrophic war known as “The Fall,” dividing the population. High-born members of society reside in a sky city known as Zalem, while low-born people live underneath in the junkyard metropolis known as Iron City. Many low-born people have cybernetic limbs and enhancements. One day cyborg surgeon Dr. Dyson Ido discovers a disembodied female cyborg with a fully intact human brain. Providing it with a body, the cyborg returns to life but does not remember her former life or her own name. Naming it Alita, Ido takes the cyborg and raises it like a daughter.

Fully embracing her new life, she meets a boy named Hugo, and the two form a connection. All the while, Iron City is plagued by a cybernetic assassin that attacks and dismembers humans. Confronting the assailant, Alita’s memories begin to resurface, and she recalls that she is the sole survivor of an ancient race of cyborgs as well as her mission to kill Nova, a Zalem scientist and the real monster behind the killings in Iron City.

Focusing on the things that the film could have done better first, I reiterate that the story could have been made more clear if more context was given early on. Yes, Alita’s backstory is explored throughout the film, but more details about her race would have helped my transition in the film, especially given that my knowledge of the original source content was nonexistent. A mere brief narration at the beginning would have accomplished this goal. Something else that could have been expanded on is the Zalem. It is my assessment that the city will be addressed more in the subsequent sequels, but as an audience member, I could have done with a little taste of things to come. I will give credit for the Edward Norton reveal; that was a pleasant surprise.

Speaking of cast, this was a great ensemble, even the addition of Ed Skerin, who was a bit typecast in my opinion. Then again, if it ain’t broke, don’t fix it, right? This was Rose Salazar’s first foray as a lead character, and though her face is computer-generated, this remains a solid performance. She is the perfect sleeper character, as her sweet and innocent appearance provides the perfect camouflage for the efficient killer underneath. Her character is open, and this aids the budding romance that she develops with Keean Johnson’s Hugo. Their chemistry is palpable and very clear when she offers something of significant value in order to help him achieve his dream, showing the depth of the two characters’ feelings for one another. Another pair with good chemistry was Salazar with her surrogate father, Christoph Waltz’s Dr. Ido. The affection for one another is a driving force for the story.

As a James Cameron production, you know there is a multitude of special effects that went into designing the world, and thanks to the IMAX experience I was able to take in every inch of the imaginative world, particularly the Motorball Arena, which is the center stage of the production and where a bulk of the action takes place. In addition to this action, there is first-rate hand-to-hand combat that is surprisingly realistic given that this is a science fiction film.

Alita: Battle Angel is presented in an aspect ratio of 2.39:1. The ultra-high-definition 2160p  image is arrived at by an HEVC codec with an impressive average bitrate of only 50 mbps. I have to admit that I expected more from this ultra-high-definition image presentation. What I got instead was an obvious split between the live-action elements and the computer-generated parts of the film. With James Cameron’s involvement you really expect something groundbreaking in the technology, and it really isn’t there, perhaps enhanced by the detail and sharpness of the 4K upgrade. The live-action stuff looks absolutely incredible. The production design created to allow the cast to interact with something real is nothing short of flawless. But the computer-generated material is so obvious that it literally pulls one out of the movie. It was worse in the darker scenes which dominate the film. Black levels are actually deep and inky, but shadow definition is marred by too much blur and uneven seams between what was “real” and what was never really there. When you consider this film was 20 years in the making, there should have been more care taken with the final shot. I respect the use of practical shooting as much as was accomplished here, but the movie throws away the advantage with second-rate CGI.

The Atmos track defaults to a pretty aggressive 7.1 mix. Here is where you get the most for your atmosphere money. The surrounds envelope you completely with all of the larger and more subtle sounds that place you firmly into this reality. There’s an organic machinery sub-text to the audio that sells you on this cyborg reality more with the sound than it does visually. The score is often rousing and full of dynamic reach without stepping on the quieter moments of the audio presentation. Dialog cuts through just fine, and there’s a tremendous effort paid to the details of placement which make this a truly immersive experience.

There is also a Blu-ray 3D version of the film and the standard Blu-ray HD version. The extras are all on the Blu-ray copy of the film.

Alita’s World: This feature contains four separate stories told through artwork and narration. There is some animation, but most of this is static images. You can only select each story individually. There is no play-all option. You get: The Fall (5:05), Iron City (3:19), What It Means To Be A Cyborg (2:28) and Rules Of The Game (2:52).

From Magna To Screen: (20:47) The feature gives us an introduction to the Magna style and introduces us to its creator Yukito Kishiro. This is a nice piece of background that actually does put the film into a perspective that makes more sense to me who was not really a fan of the original animation style.

Evolution Of Alita: (19:43) This one focuses on the character and offers us a look at her origins and the path she took to make it to the feature film. Insights from the cast and crew are particularly insightful coming from James Cameron and Rosa Salazar. We get a look at Salazar’s audition footage. There’s also a lot of footage of the motion-capture process.

Motorball: (6:02) This looks at the fictional game which is part Roller Derby and part Rollerball.

London Screening Q & A: (26:38) Cast and crew form a panel that answers questions from Twitter and Facebook from fans attending screenings all over the world.

10 Minute Cooking School – Chocolate: (5:46) This is not 10 minutes. Director Rodriquez shows us how he makes his own custom-filled chocolates. Apparently he takes making these things very seriously.

2005 Art Compilation: (14:20) Cameron started his concept art for this film back in 2005 and we get to see those renderings set to narration and music telling a story like the earlier features.

Scene Deconstruction: (10:47) You get to use those multi-color buttons on your remote to watch four scenes deciding which layer of finish you want to view. It’s bulky and doesn’t run smoothly. There’s a bit of a delay when pushing the buttons.

Granted there are a couple bugs that if worked out, the film would have been slightly better; Alita: Battle Angel remains a solid and entertaining cyberpunk action film. It is a worthwhile experience, and Rose Salazar has solidified her kickass character with a priceless heart, literally.

Jeremy Butler is a film school graduate of the International Academy of Design and Technology. He is been writing for Upcomingdiscs since 2012; however, movies have played a big part of his life for much longer. Favorite genres include horror, science fiction/fantasy, and comedy. Favorite movies are V for Vendetta, Boondocks Saints, Kiss Kiss Bang Bang, and The Godfather.
Missing Link (Blu-ray) Hail Satan?