Posted in: No Huddle by Gino Sassani on September 4th, 2019 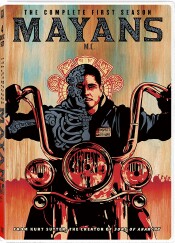 It’s been nearly five years since FX’s hit television series Sons of Anarchy rode off into the sunset. A lot of fans, myself included, were not necessarily very happy with the way it all ended. It wasn’t Sopranos bad, but it wasn’t the kind of closure or satisfaction one expects from such a compelling drama and well-written show. We all calmed a bit when we started hearing from the Sons of Anarchy Universe creator Kurt Sutter that he wasn’t quite done with that world. At first there was serious talk of there being a prequel series or movie that would take us back to the days of the original nine founders of the club. It seemed the perfect follow-up, because we already knew so much about that world through the pages of manuscript left behind by Jax’s father. It was a rich landscape, and we eagerly awaited more word. After a couple of years, hopes were starting to fall when word came that while the early story was still going to be told, the next visit to this universe was going to be the Mayan MC, which were sometimes allies and sometimes foes for SAMCRO. But another couple of years went by and there was still nothing concrete. Just when I was beginning to suspect these were nothing more than Sutter’s wish list of projects, things started to move forward on The Mayans MC. Still, as expectations began to grow, the project appeared to be in even more trouble. It was fair to ask if we were ever going back to that world again, a question I’m sure that Kurt Sutter was tired of hearing asked.

Even when the show got off the ground, it was a short flight. Sutter wrote and directed a pilot episode, but it didn’t go over too well with the network. At first he approached it with the attitude that the complaints were the same he initially got for Sons of Anarchy, and look how that turned out. After a while he started to think maybe he needed to take a step back and re-evaluate things. It was probably a smart decision. Tweaks were made to the script. A new director was chosen, and some of the characters were changed or recast. With Norberto Barba now at the helm, a second pilot was shot. I’ve not had the opportunity to see that first pilot. It’s not available in this release, and depending on how fragile Sutter is about the quality, we might get to see it somewhere down the road. So I don’t exactly know what these changes involved. I do know the result is something that will comfortably fill the gap before those early years are revisited. It’s not Sons of Anarchy by any means. It doesn’t really try to be, and that’s likely a smart choice. It’s different but fits well into that same world. It’ll certainly get us over the hump and kill some of those withdrawal pains.

The series takes place after the events in Sons of Anarchy. We are introduced to the character who will offer us the most common point of view of the environment here. Meet Ezekiel Reyes (Pardo); he goes by the nickname EZ. He has spent the last six years in prison for killing a cop. As it turned out, that cop was corrupt, and it offered the feds a chance to get him out early and make it look like it could have happened. Why would they want to get EZ out of prison? His brother Angel (Cardenas) is a member of The Mayans Motorcycle Club, and the feds are interested in their connection to a drug cartel kingpin named Miguel Galindo (Pino). He’s offered a deal that puts him back out if he joins the club and feeds information back to the feds. The deal gives him immunity along with his brother, and a promise that none of the information he provides can be used against the club.

Angel doesn’t know about the deal, but their father, Felipe (Olmos) is not only aware of the deal but agrees to use his butcher shop as a liaison between EZ and his handlers. It appears to be a pretty cut-and-dried snitch kind of thing, but EZ is propelled into a very complicated world. His brother and a few of his clubmates are also involved with a group of rebels in Mexico who are fighting the cartel. They are led by the young and charismatic Luisa Espina (Brattata). She was a child when she watched as the cartel brutally killed her mother, father, and brother. That means EZ is keeping two secrets from MC Presidente Bishop (Irby), all of this while the club is charged with running security for the cartel’s shipments of drugs. The plot is more complicated by the fact that EZ’s ex-wife Emily (Bolger) is now married to cartel head Miguel. The season plays these three main threads against the narrative of EZ’s life as a prospect for the club.

But that’s not the end of the complications. Filipe has a history with the leader of the rebels and her family. The situation forces him to confront some things he’s done that don’t exactly fill him with pride. There’s also some serious politics going on within the team of feds which produces a man in charge who doesn’t necessarily have any but his own interests to serve. He’s Lincoln Potter, played by Ray McKinnon, and he’s a quirky guy who doesn’t really care who gets hurt to get what he wants. Of course, what exactly he wants is never completely clear, and he’s using all of these players from Miguel to Luisa to EZ and his father as if they were chess pieces. He is incredibly arrogant, but also rather calculating. The season finale finds all of these pieces about to collide and puts the Reyes family in jeopardy.

The plot is often too ambitious, and 10 episodes isn’t really enough real estate to have these cogs running smoothly. But they do run, and the episodes do not waste much time. You really have to be paying attention here, as the situations shift rather swiftly, and it’s easy to get left behind. This is not the kind of show you put on in the background while you surf the net for cat videos. The scripts are very different than Sons of Anarchy. This is being told from a very different point of view, and one that isn’t always reliable or connected enough to know what’s going on. So the show will leave you guessing. But this story just isn’t as compelling as Sons was. It has to make up for it in different ways.

While Sons of Anarchy had a handful of powerful performances, there were just as many weak links. Leads Charlie Hunnan and Maggie Siff were horrible and as cardboard as they come. Perhaps they weren’t so bad, but working with the likes of Ron Perlman and Katey Segal made it all the more obvious. After watching Hunnan flop in some big films, I’m more inclined to accept that he’s just bad. Here the story is very opposite. All but a few of the actors here are quite good. Come on. You get Edward James Olmos? He was made for this part and is the show’s emotional and quality control anchor. He makes everyone he works with look better. Richard Cabral wasn’t even really an actor. He’s exactly what he’s playing here as club member Coco. He’s hands down my favorite club member. He offers us one of the larger connections to the original show. Speaking of “hands” down, do you remember Chucky, played by Michael Ornstein? He’s the guy who couldn’t stop playing with himself in public so that they chopped off his fingers to get him to stop. He was outfitted with a special glove so no f/x were needed and Coco apparently literally won him in a poker game. He’s a fiercely loyal helper whose addled mind actually makes him quite endearing in a twisted kind of way.

JD Pardo leads the cast as EZ, and it’s such a natural fit that the lines between character and actor are very hard to find. It was what made The Wire so damned good, and it’s the thing that makes the rather convoluted world of The Mayans MC so compelling. You won’t mind giving it the extra attention because it’s so authentic. Credit Sutter a bit, because he knows this world intimately, and it shows. There are other small connections to the original show. Segal makes a cameo in a prison visitation room but has no lines. Blink and you miss her. A couple of the minor club members show, and of course there is mention of that show’s events and the Charming, California location.

This series is far more dedicated to style beyond the trappings of the motorcycle club environments. Each episode is titled in Spanish after the name of an animal like scorpion snake or rat. These creatures pop up symbolically throughout the episode, usually with CG-created animals. The style is also present in text information like location or time. You have to watch carefully, as a sign’s message warps into something like “six weeks earlier”. EZ’s background story is told through these flashbacks that fill the same need Jax’s father’s manuscript served in the earlier show.

You get all 10 episodes on four discs with a couple of extras. There are a few deleted scenes, a look at the road to creation the pilot endured, and a feature on the bikes of the series. It isn’t Sons of Anarchy, and it really isn’t fair to make the inevitable comparison. I know some of you wanted something else. I know many of you aren’t happy with how the series finale went. We all wanted something else. We might still get it, but this is what there is right now. “Can’t change yesterday. Can’t plan tomorrow. I might walk out of this building, take a bullet to the head. Life is here. This. No matter what it looks like, it’s all we got, right? No regrets.”

Gino Sassani is a member of the Southeastern Film Critic's Association (SEFCA). He is a film and television critic based in Tampa, Florida. He's also the Senior Editor here at Upcomingdiscs. Gino started reviewing films in the early 1990's as a segment of his local television show Focus. He's an award-winning recording artist for Omega Records. Gino is currently working on his 8th album Merchants & Mercenaries. Gino took over Upcomingdiscs Dec 1, 2008. He works out of a home theater he calls The Reel World. Favorite films: The Godfather, The Godfather Part II, The Body Snatcher (Val Lewton film with Karloff and Lugosi, not the pod people film), Unforgiven, Gladiator, The Lion King, Jaws, Son Of Frankenstein, The Good, The Bad And The Ugly, and Monsters, Inc.
Dont Let Go Killers Anonymous (Blu-ray)