Posted in: Disc Reviews by Brent Lorentson on September 4th, 2019 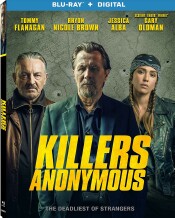 When you have a movie that features Gary Oldman, you’d expect it to be pretty good.  I feel Gary Oldman is one of the best actors who is working in the business, and I’ve been a fan since the Romeo is Bleeding and Leon days.  So when a movie comes along about killers and government assassins and Oldman is playing a character in the middle of all the drama, you’d think this is going to be something great. After all, the man finally got an Academy Award, which was long overdue.  The best way I can describe my experience with this is film is to imagine you’re going to a restaurant, one that is a two star rating in the Michelin Guide. While it may not be the best, it should still be good; yet when you get there, rather than getting a great meal you instead are given a plate of lukewarm Spaghetti-O’s fresh out of the can.  From poorly framed shots to insipid plot twists, I can’t help but wonder, what did Gary Oldman do so wrong to be stuck in this film?

For those curious about what Jessica Alba is doing in the film, well, she’s Jade, an assassin we meet in the opening of the film, and one of her scenes is with Gary Oldman, whose character is cleverly named The Man.  The way the conversation is shot is jarring, going from an oddly framed wide shot with too much negative space to these close-ups where the characters are talking into the camera.  Not even Gary Oldman can save these shots, and when it shifts perspectives it becomes all the more painful.  If this was a more personal scene, or simply a long shot with just one character speaking, maybe this could have worked better.  The scene then jumps to a strip club where Alba’s character is with a blonde character we got a glimpse of from the previous scene.  Apparently no one else is at this strip club where the only dancer is a hologram we can see in the background, but this odd little hook-up scene then turns into the girls fighting for their lives; apparently the blonde was hired to kill Jade. This fight is sloppy and cut with the opening credits that are animated depicting portions of the fight.

From here the film moves to a meeting where several hit men get together to discuss their feelings on the trade.  This isn’t a bad idea, but the way this is executed just simply doesn’t make much sense, and the more you start thinking about it, the faster this film simply unravels.  Markus (Tommy Flanagan) is one of the more obnoxious and boisterous members of the group; it’s his performance that actually keeps things somewhat interesting.  Then there is a newbie to the group, Alice (Rhyon Nicole Brown) of whom most of the group is suspicious; there are a few other members of the group, but really none of these characters are all that interesting.  What’s brought all these killers together is that a US Senator has been killed, and it’s believed the person responsible is in the room…well, that’s the excuse given until another excuse is given.  This film so badly wants to be the Reservoir Dogs of hit men films, but it doesn’t even come close.

As for Oldman, he’s stuck to keeping an eye on the meeting from a distant rooftop while fielding phone calls.  I can’t forget to mention the pseudo-David-Lynch phone conversation where instead of doing a split screen or shooting in different locations, they just have the character on the rooftop with Oldman.  This film tries to be stylish, but every time it fails miserably, like another scene that is a wide shot of the group deciding what to do with a person they catch listening in on their meeting. Seriously, this film could have been tolerable if they had just kept it simple.

None of these characters are likeable, and I don’t mean in a loathsome sense; I mean simply that none of these characters is fleshed out enough to root for.  As the film builds up to its inevitable final shootout, even here it manages to disappoint. Where we should see a flurry of bullets and bloodshed we get…well, I’ll let you suffer through to see what the result is. But one thing I will mention about its absurdness: during a shootout a character decides that seems like the opportune time to play a piano.

I can’t imagine an audience anywhere could like this film; this is one of those films that simply needs to be left in a vault and forgotten.  I’d like to say this is The Room of hit-men films, but it doesn’t quite have the charm of the film, and this was obviously shot on a larger budget.

Killers Anonymous is presented in the aspect ratio 2.35:1.  The 1080p image is arrived at with an AVC MPEG-4 codec at an average of 24 mbps.  The film has a warm look that seems to be slightly saturated. Though the skin tones appear natural, the blood spatter is bright and obviously CGI. There are some color banding issues at times; it doesn’t distract you too much, but it is definitely noticeable.

The DTS HD-Master Audio 5.1 track is serviceable where the dialog comes through clearly and some of the audio FX work sounds decentbut this is obviously not a blockbuster FX-driven film.

(Audio Commentary with co-writer and director Martin Owen and cinematographer Havard Helle) Honestly, I got through about thirty minutes of this track and had to turn it off. Just listening to this guy explain this film was mind-numbing and managed to make me dislike the film even more.

Deleted Scenes: (12:11) There are six deleted scenes. Nothing here adds to the story and is understandably cut from the final film.

Alternate Ending: (7:37) While I doubt this ending would have saved the film, I do prefer this to the one they used in the final cut.  All I’ll say is it sticks with Tommy Flanagan’s character.

I really didn’t like this film.  If I was watching on Netflix, this would have been turned off in under 15 minutes, but I watched this to the end, and I was miserable for it.  Sometimes a bad film can turn into an accidental good time, but this doesn’t have that cheesy factor to it. I can’t recommend this to anyone; every actor in this has done something better you should be watching instead of this.  Enjoy Braveheart, Sin City, Romeo is Bleeding … basically get as far away from this film as you can.

Brent Lorentson is a horror writer and film critic based out of Tampa, Florida. With a BA in Digital Film, he co-wrote and co-directed Scavenger Hunt. His short stories have appeared in various horror anthologies. In 2019 his short script Fertile Blood will be a part of the anthology horror film Slumber Party. He is currently working on his first novel A Dark and Secret Place set to be released in late 2019. Favorite Films: Taxi Driver, Fight Club, I Saw the Devil, The Wild Bunch, Dawn of the Dead, A Clockwork Orange, Pulp Fiction, Heathers, The Monster Squad, and High Fidelity.
Mayans M.C. Season 1 Into The Ashes