Posted in: Disc Reviews by Jeremy Butler on September 28th, 2019 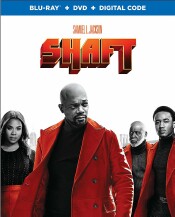 “You don’t throw guns out an open window. Kids live up in here.”

So, the announcement of this film was of particular interest of me. Of course, I have familiarity with the character of Shaft from childhood. Not to mention the remake that wasn’t really a remake that premiered in 2000 starring Samuel L Jackson. The most interesting thing about the film is that it brings three generations of the character under the umbrella of one film, with Richard Roundtree and Samuel L Jackson reprising their roles as the titular character and introducing Jesse T Usher into the franchise as the latest addition to pick up the mantle. Another interesting thing is that despite it being a sequel, it shares the same name as the 2000 version. Though this does introduce a certain level of confusion, it just proves just how bad a mother-shut-your-mouth Shaft is; he can name his movies whatever he wants.

The film follows John Shaft Jr. (Usher), a data analyst with the FBI. When we meet him, it is clear that he lacks the swagger that we are used to associating with the character. He is afraid to assert himself to his boss, who undervalues him. He hates guns, and most importantly, he struggles talking to women. I don’t know about you, but that is not the offspring I would have envisioned for the great John Shaft. Part of that may be the fact that the two haven’t laid eyes on one another for 25 years.

Now, I know what you are thinking, but before you start labeling Samuel L Jackson, I assure you there was a good reason for this that becomes clear as the movie progresses.  Despite their estrangement, Shaft II is the first person that Jr. (well, I guess he is technically he is Shaft III) goes to for assistance with solving the murder of his best friend. Though disappointed about the many differences between him and his son, Shaft II doesn’t hesitate to help his son, especially when it becomes evident that the murder case is not as cut-and-dried as the police are making it out to be, and the case may be linked to one of his own investigations.

Though it does not have the serious undertones that the 2000 version had, this sequel is a standalone success in my opinion. Not to take anything away from the 2000 film, which I enjoyed as well; I would reference the original films, but my memories of them are foggy. The key success of the film was the dynamic between Jackson and Usher, which is the main source of laughs. The best example may have been when Shaft II storms a crack house to rough up the goons who put their hands on his son. If that doesn’t scream fatherly love, I don’t know what does.

It was also good to see two actors return to a role that they are known for. Roundtree will always be the originator, but for my generation, Samuel L Jackson breathed new life in the character. Though he only did it for one film, now two, his performance exemplified the best-known traits of the character: his willingness to bend the law in the name of helping someone in need, his ability to throw down whether it be with a gun or his fist, and his duty to please that booty. Roundtree, in his return to a character he hasn’t played in 46 years, shows he is still spry, taking part in the film’s final showdown. Also, make sure you don’t miss the revelation of how all three characters are linked together. Obviously, we know the connection between Shaft II and III, but pay attention for how Shaft I and II are linked; the revelation is subtle.

The film deals with some heavy issues, but it manages to remain lighthearted and engaging. I must again give this credit to the relationship between Jackson and Usher; individually they are solid, but it’s when they are the together that the story is at its best. They play off one another, exchanging barbs and arguing their different philosophies, best seen when the two argue about how best to handle a woman who picks up a bat. Both had compelling arguments, but I may have to give a slight edge to Samuel L Jackson regarding that issue.

I would put the film in the same realm as Ride Along, mostly due to the fact that both films share the same director. Tim Story’s style doesn’t really deviate from his style in the former film, but in his defense, why mess with a winning combination? There is a reason Ride Along got a second film and is greenlit for a third. I’m not sure if there will be another addition to follow this film, but I would welcome it if there was, provided Samuel L Jackson and Roundtree were returning as well. No disrespect to Usher’s performance, but taking the reins from his predecessors would be a massive undertaking.

Shaft is presented in its original aspect ratio of 2.40:1. The 1080p image is arrived at with an AVC MPEG-4 codec at an average 30-35 mbps. The high-definition image presentation is a bit of a mixed bag. The atmosphere that the 70’s films created is gone in these modern-age Shaft films. Sharpness and detail are above average, but there’s a bit of a gloss sheen here that doesn’t quite belong. Black levels are average with some shadow definition sneaking through at times. Colors are actually pretty vibrant, with reds taking center stage when presented. The close-ups offer some of the best sharpness, with facial details considerably strong.

The Atmos track defaults to a pretty solid 7.1 mix. This is a very lively film. Surrounds do a pretty good job of immersing you into these mean streets. The bustle of the city streets is spread out nicely, giving you a wide open spaces kind of feel. Dialog cuts through any clutter. The subs are particularly strong in the action sequences, and there are plenty of those. You’ll hear the bullets graze your head, and you will find yourself fully immersed in the action.

Deleted Scenes: (2:54) There are five with no individual selection option.

Can You Dig It? – The Making Of Shaft: (10:36) Tim Story and the cast lead this feature that is overloaded with film clips. They offer some excitement and context, but it’s really more promotional than informative.

A Complicated Man – The Shaft Legacy: (44:14) This is where the meat is if you’re a fan of the character from the 70’s. There are three parts with a handy play-all option. Richard Roundtree appropriately leads the way as the feature explores the original character and films. He offers some nice insight into the character and how he got the role. This isn’t the typical hype stuff, but genuine conversation, and Roundtree has the goods just like he always did. Plenty of clips from the 70’s films and even the short-lived 7-episode television series. This is Shaft history at its best.

I guarantee that no one will walk away from the film disappointed. As I said, Shaft is a bad mother-shut-your-mouth, and three Shafts just make for a better movie.

Jeremy Butler is a film school graduate of the International Academy of Design and Technology. He is been writing for Upcomingdiscs since 2012; however, movies have played a big part of his life for much longer. Favorite genres include horror, science fiction/fantasy, and comedy. Favorite movies are V for Vendetta, Boondocks Saints, Kiss Kiss Bang Bang, and The Godfather.
X-Men: Dark Phoenix (UHD Blu-ray) (4K) AQUARELA