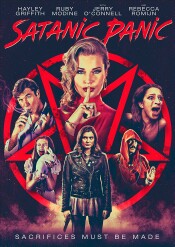 If presented with the choice whether to see Ready or Not versus Satanic Panic, see Ready or Not. Their premises are relatively similar: a young woman at risk of being sacrificed by a satanic cult. However, their executions are vastly different, as the former has a better story and better comedic timing. Satanic Panic is a dark comedy that failed to get a chuckle out of me due to its stale execution, which was a pity, as I was expecting far more with familiar faces like Jerry O’Connell and Rebecca Romijn. The film delivers in the gore department, which makes it great candidate for 31 Nights of Terror, but is lackluster in the department of a horror comedy.

Sam’s first day as a pizza delivery driver is off to a bad start. She is harassed by a coworker who helped her get the job, conned into helping a frat boy move a couch into his apartment, and propositioned by what I can only assume is a prostitute. Needless to say, that any of those things are bad enough, but what takes the cake is that on all of those, not a single tip. Desperate to make money, she takes a call out to a ritzy part of town, only to find herself targeted for ritualistic sacrifice by a satanic cult. Sam might want to start looking for a new job.

I’m not really sure what to make out about Satanic Panic. I initially thought of it as a parody film, but the themes suggest that it was intended to be more of a black comedy. The one thing that is clear is comedy was a stretch. Firstly, none of the characters were especially interesting. The story was told from the perspective of Haley Griffith’s character, Sam, who just happens to be a virgin needed for a human sacrifice by a satanic cult, who just so happen to be her delivery stop. Not exactly a realistic and relatable plot. Back to the characters: there is nothing very interesting about Sam. Realistically, her situation is the result of her own desperation and timid nature. The fact that she got herself into this situation for a pizza tip makes it difficult to sympathize with her. Additionally, I expected Rebecca Romijn and Jerry O’Connell, who are clearly among the film’s biggest draws, to be interesting. O’Connell’s role is brief, and his performance will do nothing to endear him to the audience or women in general. Romijn stays on target with her character’s motivation, but it is far from a captivating performance.

The story is generic and offers nothing new to the horror genre. I did not expect the film to be a trailblazer, though I hear mixed things about the film’s director, Chelsea Stardust, but it would have been nice to have experience something unexpected. I won’t go as far as to call the film unfunny, but I will express that the jokes were not for me. I suspect that if you enjoy immature humor, your reaction may be different.

I believe the kindest thing I can say about the film is that it was not for me. It could partially be because I saw a more entertaining version of the film earlier in the year, but I suspect that it has more to do with its inability to make me laugh. If you are in the Halloween spirit and you are feeling lucky, give it a try. I hope you have a better experience than I did.

Jeremy Butler is a film school graduate of the International Academy of Design and Technology. He is been writing for Upcomingdiscs since 2012; however, movies have played a big part of his life for much longer. Favorite genres include horror, science fiction/fantasy, and comedy. Favorite movies are V for Vendetta, Boondocks Saints, Kiss Kiss Bang Bang, and The Godfather.
Night Hunter (Blu-ray) Scarface (1983) The World is Yours Limited Edition (UHD Blu-ray) (4K)