Posted in: Disc Reviews by Brent Lorentson on October 23rd, 2019 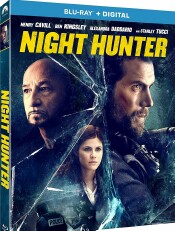 When it comes to gritty detective films, Seven and Zodiac are two that help define the genre.  It seems like there are so many films that are attempting to piggyback off the style, but so many films fail because they are trying so hard to copycat the films, or they simply pull their punches with the material.  Night Hunter is the newest film to make an attempt but sadly just falls apart.  There is a lot of potential in this film, with Henry Cavill (Man of Steel) taking the top billing; then there are Ben Kingsley, Stanley Tucci, and Nathan Fillion filling out the cast. The cast and the storyline give this the potential to be a great thriller, but unfortunately the delivery ends up being something just a little better than an episode of Law and Order.

After a woman manages to escape from her kidnapper, exhausted and barely clothed in the cold, she chooses to take a leap from a bridge rather than go back into the hands of her attacker. The leap ends up killing her as she lands on the back of a logging truck, and this is where Marshall (Cavill) comes in, as he’s tasked with investigating what happened to the woman. On a more entertaining side, there is Cooper (Kingsley), a former judge. With the aid of his young ward they lure out pedophiles, and after the would-be sex offender has succumbed, they castrate the men.  Yeah, this film starts off dark and sets us up for what we hope can be a gritty vigilante tale, but instead this goes a much more safe and generic route.  Really, what are the odds that the same attacker involved with Marshall’s case would just so happen to kidnap the girl working with Cooper? It’s a bit of a stretch, but this film takes so many leaps in logic that it becomes borderline absurd.

For some reason there is a need to throw in Rachel (Alexandra Daddario), a profiler who is having a relationship with Marshall.  Adding her as a character works somewhat when it comes to them trying to figure out who the kidnapper is and their motivations, but adding the relationship angle as well as Marshall’s broken family life seems like a distraction, especially when this film has so many plot holes and spends no time filling in these holes.  This brings me to the film’s “villain”, Simon (Brendan Fletcher), who seems to be too mentally retarded to pull off these crimes, or perhaps it’s all an act.  This is where I got most frustrated with the film. It reveals its villain so quickly with no suspense, but when it tries to give us a twist, it’s so absurd that for a few minutes you forget how this guy could be the killer in the first place.  No, seriously, when the film gives its obligatory twist, I simply groaned at how bad this one was.  I’m more annoyed, because if this film just kept it simple, it would have been a fun little movie.

When it comes to Cavill, his performance here is a bit phoned in.  We don’t get the charismatic guy I’ve grown to like from his roles in The Man From UNCLE or Mission Impossible: Fallout. Henry Cavill is a good leading man, but it’s obvious he’s bored with the material here, and with Kingsley and Tucci bringing their A game, well, his performance looks pretty weak here.  Is this going to be a movie that ruins Cavill?  I seriously doubt it, but right now it would be nice to see him in something good again.

Night Hunter is presented in the aspect ratio 2.39:1.  The 1080p image is arrived at with an AVC MPEG-4 codec at an average of 28 mbps.  This is a really nice sharp-looking picture, though it has a bit of a green and bluish tint to it.  While the most impressive aspect is how deep the blacks are, what I do feel is missing is a bit of grit and grain.  For a film like this, I wish it didn’t look so polished, though this is a complaint based on preference.

The DTS HD-Master Audio 5.1 track is impressive, mostly when it comes to how the F/X play with space, everything from the car chases along with other action sequences to the multiple environments.  Two scenes that stand out are when Marshall finds the area where the kidnapped girls are being held and there is music playing, and a shootout that occurs when confronting a bomb maker.  The dialog is clear throughout, which is helpful in a film like this.

There are no special features

While it’s not the worst movie, the film tries to be clever when it should have kept it simple. It was worth seeing once; Night Hunter is something I’d hold off to see on cable or free on a streaming service.  Kingsley is great in just about every scene he’s in, and he does elevate the film, but the film falls apart the moment you start questioning the actions of the characters.

Brent Lorentson is a horror writer and film critic based out of Tampa, Florida. With a BA in Digital Film, he co-wrote and co-directed Scavenger Hunt. His short stories have appeared in various horror anthologies. In 2019 his short script Fertile Blood will be a part of the anthology horror film Slumber Party. He is currently working on his first novel A Dark and Secret Place set to be released in late 2019. Favorite Films: Taxi Driver, Fight Club, I Saw the Devil, The Wild Bunch, Dawn of the Dead, A Clockwork Orange, Pulp Fiction, Heathers, The Monster Squad, and High Fidelity.
“31 Nights Of Terror” Contest: Win Universal Horror Collection: Vol. 2 From Shout Factory “31 Nights Of Terror” Satanic Panic