Posted in: Disc Reviews by Gino Sassani on October 25th, 2019 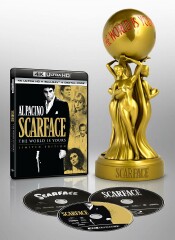 “In May 1980, Fidel Castro opened the harbor at Mariel, Cuba with the apparent intention of letting some of his people join their relatives in the United States. Within seventy-two hours, 3,000 U.S. boats were headed for Cuba. It soon became evident that Castro was forcing the boat owners to carry back with them not only their relatives, but the dregs of his jails. Of the 125,000 refugees that landed in Florida, an estimated 25,000 had criminal records.”

One of those refugees was Tony Montana.

“Every dog has his day.”

It all started in 1932 when Howard Hawks and Ben Hecht co-created the first Scarface film. They get a fitting dedication during the end-credits. In those days it was the Chicago mob, and the kingpin was Al Capone, or a man who very strongly resembled the legendary thug. It was Prohibition, and the empire was built on booze. It was an iconic time with iconic characters who were certainly larger than life. Flash forward 52 years, and Martin Bregman wanted to team up with his long-time collaborator Al Pacino to remake the classic film. But they didn’t really want to rehash the same old gangster images. It was actually Sidney Lummet who came up with the idea of moving the action to Miami in the days of the Cuban refugees and the cocaine cowboys. In the hands of Oliver Stone, the idea became 1984’s Scarface.

Tony Montana (Pacino) and his friend Manny (Bauer) are living in one of the “Freedom Town” tent cities that were created in Miami in 1980 to handle the influx of Cubans released by Castro. They gain their freedom by agreeing to kill a Communist within the community, something Tony is more than happy to do. Attracted to the power and wealth of the growing cocaine industry, Tony begins to work for Frank Lopez (Loggia) but soon finds himself the big fish in the water. But power corrupts, and Tony falls victim to his own ego and breaks one of the number one rules of the game: “Don’t get high on your own supply.”. Just as his rise was violent, his fall will be even more so.

“Me, I always tell the truth. Even when I lie.”

Of course the film is far more complicated than that. Honestly, the subtle plot points are better left for the viewer to explore instead of dictated by the likes of me. Scarface is one of the most memorable and most quoted films of all time. But it’s not that easy to point out any particular reason why or any particular person on which to heap the credit. It was early in Oliver Stone’s career, and with all of his successes I’m not sure he ever wrote anything as good again. He named Tony Montana after his favorite football quarterback, a guy named Joe who was tearing things up in San Francisco. Yet even a superb script doesn’t really explain the film’s enduring quality by itself.

You can’t deny that Brian De Palma deserves a huge amount of the credit here. The film is overflowing with iconic images that stay with you long after you’ve seen the film. There is an honesty in the style that truly attempted to capture the world of these cocaine empires in Miami at the time. It was a violent place and time just as much as the Chicago of the first film’s Prohibition era. It was De Palma’s intent to film entirely in Miami, but they were literally run out of Dodge by a large Cuban faction that either believed the film would give them a bad name or thought it was going to be a pro-Castro piece of propaganda. Oddly enough, that same community holds the film in high regard today. The style would also go on to influence a ton of imitators in the 1980’s and 90’s. It’s no coincidence that one year later Michael Mann made his mark with the popular Miami Vice. De Palma left his mark on this film, absolutely. But that mark is still felt today in the industry.

Then there is the remarkable cast. Pick any actor or character, and it’s hard to imagine anyone else in those roles. Yes, of course you’re talking about Al Pacino, who was able to play completely against expectations. It appears odd that they would select an Italian-American to play a Cuban, but his accent has become the sound of legend. Pacino has never had an off button, and that describes Tony Montana to the core. But it’s not just Pacino. I could go on for hours, but his performance by now is a given. De Palma was careful with even the smallest of roles. F. Murray Abraham as Lopez’s right-hand man Omar is in the film for maybe 10 minutes, but those are 10 memorable minutes, I’ll tell you that. Robert Loggia as Tony’s mentor and eventual rival Lopez is another stroke of genius. Tony’s best friend Manny is played by Steven Bauer, a native Cuban and relative newcomer as was a young, almost unrecognizable Michelle Pfeiffer as Tony’s girl Elvira. Pacino’s performance gets most of the attention, but he’ll be the first to tell you that this was a brilliant cast all around.

“The world is yours.”

Many ideas from the original film remain, including the above motto of both gangsters. The swift rise to the top over his own mentor is also retained, as is the idea of stealing his mentor’s girl. Both films talk to the idea of coming from nothing and taking the world by storm only to lose it to oneself. It’s a classic tale that neither Hawks nor Stone really invented. They both knew how to show it off. Both films are memorable and worth seeing.

Scarface is presented in its original aspect ratio of 2.35:1. The ultra-high-definition 2160p  image is arrived at by an HEVC codec with an average bitrate of 60 mbps. This beats every version you have seen or collected hands down. There are some nice grain elements here, which tell me there hasn’t been so much DNR used on this transfer. Close-ups of the actors/characters show the kind of detail you never saw before, and it adds immensely to Pacino’s performance. Black levels display a notable improvement, which adds detail to that finale scene in the mansion. Textures and colors pop. Michelle Pfeiffer’s dresses stand out on her, particularly a satin green one that just pops like it never has before. It’s obvious some care was employed here, and it finally makes up for the rather disappointing image presentation of the earlier Blu-ray.

The DTS:X track defaults to a pretty solid 7.1 mix. The audio presentation is certainly dynamic enough. An older version of the film was plagued with some distortion, particularly when Pacino screams, which is about every other word. Here all of that has been fixed, and the dialog is sharp and clean. The aggressive soundtrack has a new life as well. There is more bottom here than ever before. This is an explosive film that will rock your theater quite impressively. The surrounds are also much improved. I noticed it more on subtle moments like street scenes where traffic has a nice immersive flow in the surrounds. Of course, it’s dynamite with the action scenes like the explosive climax. The sound also feels suddenly fuller when there are songs playing. It fills the sound field quite nicely.

The only new bonus feature is found on the 4K disc.

Scarface 35th Anniversary Reunion: (27:06): This was recorded on April 19, 2018 at Tribeca. It was a live panel with Al Pacino, Brian DePalma, Michelle Pfeiffer, and Steven Bauer.

The World Is Yours Limited Edition also contains a nice reproduction of the statue on Tony’s desk in the film.

You also get a copy of the original Hawks film on Blu-ray.

It’s hard to imagine today that De Palma had a constant struggle in order to get an R rating for the film. While still a fairly violent film, nothing in this movie would be considered as taboo today. In fact, the film has often been commended for accurately depicting a culture. Of course, we’re not talking ethnic culture, but the cocaine culture that made Miami one of the most violent cities in the country during the 1980’s. Montana is a different kind of villain. As he struggles to the top, we all root for the passionate underdog. But somewhere along the line we all accept that he gets what he has coming by the end. The good guy/bad guy mold had been broken, and movies would never quite be exactly the same again. “So say good night to the bad guy! Come on. The last time you gonna see a bad guy like this again, let me tell you.”

Gino Sassani is a member of the Southeastern Film Critic's Association (SEFCA). He is a film and television critic based in Tampa, Florida. He's also the Senior Editor here at Upcomingdiscs. Gino started reviewing films in the early 1990's as a segment of his local television show Focus. He's an award-winning recording artist for Omega Records. Gino is currently working on his 8th album Merchants & Mercenaries. Gino took over Upcomingdiscs Dec 1, 2008. He works out of a home theater he calls The Reel World. Favorite films: The Godfather, The Godfather Part II, The Body Snatcher (Val Lewton film with Karloff and Lugosi, not the pod people film), Unforgiven, Gladiator, The Lion King, Jaws, Son Of Frankenstein, The Good, The Bad And The Ugly, and Monsters, Inc.
“31 Nights Of Terror” Satanic Panic 007: The Daniel Craig Collection (UHD Blu-ray) (4K)