Posted in: Disc Reviews by Jeremy Butler on October 28th, 2019 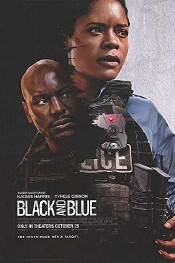 “Murder is Murder. Don’t matter who you are.”

Naomie Harris lives by these words as she finds herself hunted by her own in Black and Blue. Fortunately, she is not alone, as Tyrese Gibson is also there to lend a hand in this real-life commentary that pulls no punches. We all know that there is a brotherhood within the police force. They are a family, and family looks out for family. This film examines what happens when family crosses a line that they cannot come back from. Harris portrays a rookie police officer who stumbles across an execution by her fellow cops.  In that moment she goes from being blue to black. Joining her on the cast is Gibson, Frank Grillo, Mike Colter, and Black Lightning’s Nafessa Williams in a role that will make you hate her.

The world has become a cold and lonely place for rookie cop Alicia West. Returning home from active duty, she becomes a cop in her native town of New Orleans with the hope of making a difference in her community. Little does she know that being a cop sets her apart from her community, as she finds herself instantly ostracized by people she grew up with, all because of her status as a police officer in an area that is ridden with poverty and desperation where the police are viewed as either corrupt or ineffective. Alicia is very popular among her colleagues in blue due to hesitation to use excessive force in her duties.

When partnered with veteran Deacon Brown (James Moses Black, This Is Us), Alicia stumbles across Brown engaging in an execution-style killing of three drug dealers along with narcotics detectives Terry Malone (Frank Grillo) and Smitty (Beau Knapp, Death Wish). Panicked when he sees Alicia’s bodycam, Smitty shots Alicia, hitting her vest. Now alone and hit by her own, Alicia doesn’t know where to turn, as she tries to get back to the precinct and upload the evidence of the crime.

This is a highly charged subject matter that puts focus on the perceived double standard that exists in the police force. This fact is brought up very early on in the film, when Alicia’s initial partner highlights the fact that police don’t even respond to calls in a particularly bad housing complex unless the call involves a fellow police officer in danger. As I said, the film pulls no punches as it shows the depth of police corruption and how desperate the officers can become at the prospect of their actions coming to light. At one point, we see this tightly knit group turn on in each rather suddenly. This was to be expected, but the manner in which the situation is handled is so organic that it felt very realistic.

This was a great cast to bring this film to life, though I must admit that Mike Colter got the short end of the stick, representing a very cliché ideal of a drug dealer. I mean, the grill, the fur coat, and his demeanor just don’t match the Colter that we have seen in recent years. I’m too used to seeing him wear suits and be articulate for me to see him portray a hood figure. Sorry, Colter, you made too much progress in your career to be convincing as a thug. Don’t sweat it, though, that’s a good thing. The one redeeming quality of his character is his loyalty to his family. Another character that was bit contradictory was Nafessa Williams. On her television series she is an intelligent and outspoken advocate for her city and hero, so she had to work doubly hard to give a convincing performance as a hood chick. I tip my hat for her efforts, because she managed to make her character so unlikeable that despite her best efforts, redemption is not completely possible.  Grillo is a bit typecast in the role of the villain, but it does play to his strengths, as the manner in which he attempts to get himself clean of the situation he finds himself in is downright diabolical. Harris and Gibson have good chemistry together, but it is Harris’ solo performance that makes the movie. Despite being in a desperate situation, her scrappiness shows a solid will to live and the determination to bring down her corrupt counterparts.

Adding to the film was the soundtrack, which included hits from J Cole, Emeli Sande, and KRS One. It’s rare that I vibe out to the music in a film, but when hearing Cole’s Middle Child, a smile instantly spread across my face, and my head starting bopping to the beat. Black and Blue is not likely to win the weekend box office, but it is deserving of a good box office reception. I’m already committed to purchasing it when it comes out on home media.

Jeremy Butler is a film school graduate of the International Academy of Design and Technology. He is been writing for Upcomingdiscs since 2012; however, movies have played a big part of his life for much longer. Favorite genres include horror, science fiction/fantasy, and comedy. Favorite movies are V for Vendetta, Boondocks Saints, Kiss Kiss Bang Bang, and The Godfather.
“31 Nights Of Terror” Tampa Theatre: Here There Be Ghosts The Current War: The Director’s Cut