The Current War: The Director’s Cut 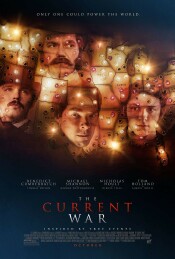 We take it for granted. Every day our lives depend on the flow of electricity to our homes, workplaces, entertainment venues, and hospitals. Living in Florida where you might brush the occasional hurricane, it’s the thing I dread the most when a storm approaches. I don’t worry so much about damage to my home as I do the inevitable five days without power. No AC. No television. No refrigeration for the food. We are so dependent that it’s hard for me to comprehend that I grew up knowing people in my own family who lived before there was any electricity service at all. In another 70 years people will be saying the same thing about the internet. We all know Al Gore invented the internet. But who got us connected with this whole electric power grid? Like most things in a capitalistic society, there was fierce competition. Companies fought for the ability to bring electricity to your home. City by city, the contest endured until eventually the entire country could bask in the glaring glow of the world’s first light bulbs. The Current War: The Director’s Cut takes us inside that struggle to win that race. It’s a compelling story, and even if it doesn’t all ring quite true, it’s an entertaining journey to the moment in time when everything changed.

As the film begins we find a weary Thomas Edison (Cumberbatch) with his family on a train after a visit to the president of the United States and J.P. Morgan (Macfadyen), where Edison was forced to plead for more financing for his dream to electrify the nation. Fresh off of his creation of a stable light bulb, it was important to get power to houses, or there was really no need to buy the bulbs. He has an idea of using direct current (DC) to distribute that power from a turbine electrical generation process of his invention. On the way home he had been invited to dinner at the home of industrialist George Westinghouse (Shannon). The family made elaborate preparations for the visit, which had been accepted. But Edison was tired and decided to skip the dinner and ordered the train to just blow by the welcoming committee at the station. In the film it would be the greatest mistake of his life. Slighted, Westinghouse decides to back a plane to use alternating current (AC) and directly compete with Edison for the contract in cities across the country. Edison is also somewhat undone by his arrogant dismissal of an employee who was trying to get him on the right track. That was Nikola Tesla (Hoult). Tesla would eventually join the Westinghouse group, and together they would form what would later be called General Electric.

The film doesn’t impress with the story. There are quite a few faults that diminish the actual tale that is being told. The first flaw is how small of a part Tesla happens to have here. As I recall my history, it was Tesla who was the driving force against Edison, and he’s reduced to a rather dull bit of a detour in the film. While his importance is recognized, he’s never allowed to become the driving force that he turned out to be. The film also appears to be telling us that the entire competition came about because of Westinghouse’s hurt feelings and a dinner date blow-off. I think that cheapens the story itself, instead of making it somewhat more interesting as I’m sure was the purpose of the vehicle. There are so many flaws in the story, but it’s all saved by the fact that we have some rather powerful performers involved in the melee.

Benedict Cumberbatch is outstanding as Edison. It’s not surprising, really. Edison shares more than a few characteristics with Cumberbatch’s BBC Holmes character. Both are incredibly smart but are often undone by their arrogance and lack of social graces. It was a bit of brilliant casting, to be sure. That casting genius is furthered by the addition of Michael Shannon as George Westinghouse. I wasn’t thrilled with the character’s presence taking over much of what should have belonged to Tesla, but damn, is Shannon a wonderful actor. The chemistry of rivalry between these two characters is some of the best you’ll see anywhere on the big screen this year. The fact is they share almost no screen time together, but you really do get the feeling they are playing off each other, and the result is quite remarkable.

There are a few other performances that bear mention. Tom Holland plays Samuel Insull, Edison’s personal secretary and often advisor and father confessor. I don’t really know what influence the actual man might have had on Edison’s inventions, but he’s the perfect counsel here. It’s also nice to see Holland able to use his natural British voice here. When we see Cumberbatch and Holland together, we’ve been trained to see a very different kind of story.

One aspect of the film I still don’t quite know how I feel about is another one of its detours. Throughout the film we see Edison suddenly inspired by visual perceptions, once by flipping a book to create animation, and another observing a scene through the flickering blades of a fan. Of course, these observations are leading him toward an invention that is kind of the reason we are all here talking about a movie. He’s inventing the motion picture. I understand why director Alfonso Gomez-Rejon wanted that to be a part of the film. A text epilog puts it together for us. But Gomez-Rejon isn’t really making a “film”, as this movie was shot entirely on digital cameras. It might have been a far more emotional connection had this been shot on film. Edison not only invented the medium, but he was a driving force in early filmmaking. He had a production company and directed some of the earliest films including a once-thought lost version of Frankenstein that I currently own a copy of. It could have been a nice touch, and I get it, but it is what it is.

The film has a tag on the title that this is a director’s cut. That’s somewhat strange for a theatrically released movie. The thing was actually shot two years ago but canned when the Harvey Weinstein business started to come out. Legal issues had to be worked out as far as ownership and getting Weinstein’s name disassociated with the project. The director was unhappy with the finished film anyway, so he was allowed to do reshoots and re-edit the movie. This is the result of all of that process. It also might explain the discontinuity that appears to haunt the final release. It would seem that the director decided “I can take a beating, but I have no patience for shoddy work.”

Gino Sassani is a member of the Southeastern Film Critic's Association (SEFCA). He is a film and television critic based in Tampa, Florida. He's also the Senior Editor here at Upcomingdiscs. Gino started reviewing films in the early 1990's as a segment of his local television show Focus. He's an award-winning recording artist for Omega Records. Gino is currently working on his 8th album Merchants & Mercenaries. Gino took over Upcomingdiscs Dec 1, 2008. He works out of a home theater he calls The Reel World. Favorite films: The Godfather, The Godfather Part II, The Body Snatcher (Val Lewton film with Karloff and Lugosi, not the pod people film), Unforgiven, Gladiator, The Lion King, Jaws, Son Of Frankenstein, The Good, The Bad And The Ugly, and Monsters, Inc.
Black and Blue “31 Nights Of Terror” Three from Hell