“31 Nights Of Terror” Three from Hell

Posted in: The Reel World by Brent Lorentson on October 29th, 2019 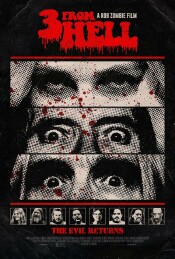 When it comes to Rob Zombie, his films are a bit hit-or-miss. Halloween and The Devils Rejects are his biggest commercial successes, but when he delivers films like Halloween 2, fans tend to be unforgiving.  Now we have 3 From Hell, the final chapter in his Firefly family saga that began way back with House of 1000 Corpses and followed up by The Devils Rejects.  While many fans have been excited about this third film, I’ve been on the fence wondering if this is really something I want to see.  The Devils Rejects is a dark and mean little film that delivers one of the most satisfying endings for a horror film. It’s so good I have my doubts that it could ever be topped.  But in Hollywood, if there is potential to make more money off a “franchise”, then there is going to be a sequel whether you want it or not.  It’s been 16 years since the franchise began. How does he wrap it up?  Well, buckle up, it’s a bit of a bumpy ride; that’s for sure.

The film opens up with the fallout from the massive showdown from The Devils Rejects as we saw Otis (Bill Moseley), Baby (Sheri Moon Zombie), and Captain Spaulding (Sid Haig) get taken down in a flurry of gunfire. We see them taken in to the hospital where by some miracle the three survive, and then the three are put on trial for their crimes.  There is definitely a Natural Born Killers vibe to the first third of the film as Zombie does a good job at showing how this trio of psychopaths would be treated like celebrities in the media and how they develop fans. Some people are willing to even believe the three are all innocent and are being framed by the government. Sadly, though, a lot of this is rushed to build up for a big prison break to set up another murder spree led by Otis.  Sure, it’s nice seeing Otis, and we get some bittersweet moments with Captain Spaulding (a shame this will be the last time we’ll see Sid Haig but his moments on screen are memorable none the less). But what doesn’t work is Baby.  I’ve always been a fan of Sheri Moon Zombie and felt fans were kind of hard on her performances in the past, but this time around there are some groan-worthy moments.  What’s worse is when you have her performing alongside Moseley, it’s impossible not to notice the talent gap.  Joining Otis and Baby on their escape and new spree of mayhem is Richard Brake, playing Winslow Foxworth Coltrane, who is Otis’s brother.  Brake is a welcomed addition to the cinematic family, but he’s obviously not in the same league of crazy that is Baby and Otis.

Here’s the film’s biggest problem: all of this film feels more like film service, and it simply lacks any of the murderous passion that we saw in the previous films.  Otis feels more like a tired old man rather than the murder-crazed psychopath we’ve seen before.  Otis was always the brains of the group, but he thrived off chaos and took insane pleasure when it came to committing some atrocious acts.  He was a guy that would terrify you, but here, he’s written as though he’s not so bad, and he’s only killing to stay free.  As for Baby, sure, she’s still a lunatic, but also she’s given too much sympathy. It’s as though Rob Zombie gave up on these despicable characters and decided to make them more likeable anti-heroes.  This is frustrating, especially when we see Baby and Otis at the prison warden’s house.  Basically Zombie has recycled the disturbing motel scene in The Devils Rejects and has watered it down. Sure, it’s violent, but it doesn’t have that edge where you wonder just how far it will push things.

Then as the film decides to head south as they escape to Mexico, the film takes another twist and becomes a revenge film where the family sort of takes on a hero status.  Is it entertaining?  Yes, but the film just doesn’t hold up to the previous two.  One of film’s best moments is a nice scene between Baby and a character she befriends in the small Mexico town.  It’s not over-the-top, and it actually shows a side of Baby we can genuinely empathize with as she discusses how the man reminds her of Tiny (the quiet giant from House of 1000 Corpses).  This is what the film needed more of. As an audience we can support and empathize with Baby on this, and if it was used to fuel her rage, well, it’s something we can get behind, but sadly it’s too little, too late.  Even when it comes to the relationship between Otis and Winslow, there is a lost opportunity to discuss why Winslow was never a part of the Firefly clan until now.

As the film finally comes to an end, all I can think is, this wasn’t a film Zombie wanted to do. Even on his films that misfire, you can see the passion on the screen.  I was hoping this film would end guns ablaze, but sadly, the credits roll with a whimper of what it once was.  While it’s not awful, the film just feels unnecessary and a bit too long.  There are some good ideas here, but none of it gets fleshed out. It’s a sad way to say goodbye to these characters, but hopefully this film will finally close the book on them.

Brent Lorentson is a horror writer and film critic based out of Tampa, Florida. With a BA in Digital Film, he co-wrote and co-directed Scavenger Hunt. His short stories have appeared in various horror anthologies. In 2019 his short script Fertile Blood will be a part of the anthology horror film Slumber Party. He is currently working on his first novel A Dark and Secret Place set to be released in late 2019. Favorite Films: Taxi Driver, Fight Club, I Saw the Devil, The Wild Bunch, Dawn of the Dead, A Clockwork Orange, Pulp Fiction, Heathers, The Monster Squad, and High Fidelity.
The Current War: The Director’s Cut The Lion King (2019) (UHD Blu-ray) (4K)