Posted in: Disc Reviews by Gino Sassani on October 29th, 2019 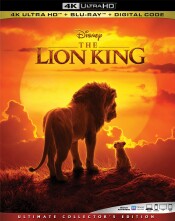 There’s a period in the 1990’s that has often been referred to as the second golden age of Disney animation. The studio had fallen from its once mighty perch, and most film historians tend to agree there was a creative dark ages through the 1980’s. But the renaissance of the studio began with Aladdin in 1992 would go on to include such tremendous classics as Beauty And The Beast and The Little Mermaid. None of these films speak to the resurgence of the animated feature like The Lion King. The film set every animated record there was and holds some of those box office records today. It can be safely stated that the great flood of animated projects that followed can be traced to the impact of The Lion King. In 1996 Simba was the most popular name chosen for new housecats. Elton John saw his appeal extend to children, and there could be no mistake that the animated feature was back. That’s the legacy of The Lion King.

Nearly 20 years late along comes Jon Favreau. He takes a much older Disney classic, The Jungle Book and creates a “live action” version of the timeless tale and creates a truly remarkable film. I was a huge fan of the new movie, but my celebration of the film was somewhat tainted by the announcement that Favreau would move on to my beloved The Lion King next. As much as I really wanted to love this film, I found it landed with a very heavy thud.

The story and new movie is pretty much a nearly shot-for-shot remake of the original with new voice cast members with one notable exception. James Earl Jones would once again lend his authoritive voice to the character of Mufasa. That nod to the original acts as a rather fine thread that tethers this remake to the film that inspired it. The rest of the cast is exceptional enough with the likes of Alfre Woodard, Seth Rogan, John Oliver, and Beyonce. The story is quite faithful, and the technological achievement here is nothing short of a miracle. But as I watched the , none of the iconic songs or moments appeared to touch me in quite the way the animated feature continues to do today. Honestly, there wasn’t one thing I could put my finger on to explain it. I found the interpretations of the songs to be a bit emotionless, and that was certainly a part of it, but I could chalk that up to being so in love with those original performances. So what was it exactly that was keeping me from connecting to this movie? I just couldn’t figure it out. Then I watched the extras, and it all clicked in one sheer moment of epiphany.

In the bonus features there is a ton of clips from both films, and it hit me like a ton of bricks. The first film was very bright with bright and vivid colors. Everything about that environment even during the darker sequences had brilliance about it that was practically invisible to me in the past. The new Lion King is dark. Colors are very earth-tone with a lot of browns. Of course it is; there are a ton of lions about. But it wasn’t just the animals. Favreau chose to take the atmosphere and create a very somber tone with his choices of lighting and color. I was reminded that the film does sport some dark themes. The murder of a brother and the concept of death are a huge part of both films’ basic concept. But the animated film softens that theme with its brightness. Songs like The Circle Of Life express those themes in an almost joyful way as the concept is explained to the children watching the film. Favreau strayed away from that form of presentation and took these themes far too realistic and literally. This film isn’t the celebration of that circle of life. It’s a dire morality play that wasn’t so harsh in the first film. Favreau forgot his audience and made a film that he as an adult lover of cinema would want to see. He didn’t make the film that children of all ages and lovers of the first film wanted to see. I suspect if he had he might have passed for a different project altogether. I for one wish he had.

The Lion King is presented in its original aspect ratio of 1.78:1. The ultra-high-definition 2160p  image is arrived at by an HEVC codec with an impressive average bitrate of 65-70 mbps. Whatever I think about the film itself, there is no mistaking the incredible leap forward in computer-generated animation the film represents. The ultra-high-definition image presentation allows the viewer to really appreciate the wonderful image. The higher resolution gives you intimate detail with a texture element that defies the unreality of it all. The fur on the animals is as photo-real as you can get. Yeah, I know, we’ve all heard that before. It’s not just the animal recreations. The environments look completely real and immersive. The HDR allows for wonderful contrast, and that big orange sunset is amazing, to be sure. Black levels give you superior shadow definition. I haven’t seen anything this real from a computer before. You simply have to view this in 4K to appreciate the magic that this team pulled off.

The Atmos track defaults to a pretty average 7.1 mix. The surrounds aren’t very immersive or aggressive. I’m not sure why the sound field was as limited as it was. There were perfect moments to widen the audio presentation but they never really happened. As amazing as the image is the sound is somewhat underwhelming. There are notable exceptions. The music allows you to experience some of that widened feel. The clarity and dynamic range here is when the film is at its best sonically. The subs are impressive. When you get a real lion roar, you can feel the trembling power of the sound. Here’s another place where the sound expands. Dialog is always clear and present. You could say that if the songs and dialog are served the rest is just ear candy. Yeah, but that ear candy is the difference between watching a movie and becoming immersed in the movie.

The Journey To The Lion King: (53:25) This is a 3-part feature with a play-all option. I was a little turned off that it starts with Han Zimmer in the orchestra recording studio. He asks the musicians to raise their hands if they saw the original film. Of course, most did. Then he said we’re about to improve on it. I love Hans Zimmer, but it’s an unfortunate start for me. The features do take you behind the scenes for pretty much every aspect of the process used to create the film. It’s great watching this image magic come together.

More To Be Scene: (10:31) You get three musical scenes and get to watch it being intercut with other layers of the process including a live rehearsal.

Song Selection: This feature allows you to jump directly to the songs in the film.

Disney is going through a bit of a growing pain these days. For some reason any real original content is being pushed back as they work their way through the classic animated films and make their “live action” counterparts. With few exceptions that has been the main release schedule from the studio. There were three just last summer with Dumbo and Aladdin bringing up the most of the box office haul. There doesn’t appear to be an end in sight. Eventually, I think Disney will get back to Uncle Walt’s dream. It has to happen, right? After all: “It’s the circle of life.”

Gino Sassani is a member of the Southeastern Film Critic's Association (SEFCA). He is a film and television critic based in Tampa, Florida. He's also the Senior Editor here at Upcomingdiscs. Gino started reviewing films in the early 1990's as a segment of his local television show Focus. He's an award-winning recording artist for Omega Records. Gino is currently working on his 8th album Merchants & Mercenaries. Gino took over Upcomingdiscs Dec 1, 2008. He works out of a home theater he calls The Reel World. Favorite films: The Godfather, The Godfather Part II, The Body Snatcher (Val Lewton film with Karloff and Lugosi, not the pod people film), Unforgiven, Gladiator, The Lion King, Jaws, Son Of Frankenstein, The Good, The Bad And The Ugly, and Monsters, Inc.
“31 Nights Of Terror” Three from Hell “31 Nights Of Terror” Night Of The Creeps