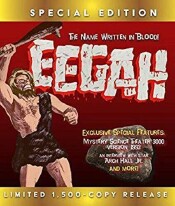 I think I see your problem. You have this list. It’s a list of people you need/want to buy a Christmas gift for. The trouble is that they’re into home theatre, and you don’t know Star Trek from Star Wars. You couldn’t tell a Wolf Man from a Wolverine. And you always thought that Paranormal Activity was something too kinky to talk about. Fortunately, Upcomingdiscs has come to the rescue every Christmas with our Gift Guide Spotlights. Keep checking back to see more recommendations for your holiday shopping. These gift guides ARE NOT paid advertisements. We take no money to publish them. This time we turn our sights on to one of the worst films you’ll ever see. You’re confused, yeah? Why am I recommending you give your favorite special film fan a bad movie? Because they’re going to love it. I know. Now you’re even more confused. Let’s see if I can explain.

There are several ways for a film to achieve classic status. Some films are just so good that they last the test of time and wind their way throughout our popular culture. Some films fail immediately but end up finding an audience years later through nostalgic showings or the old late-night television audiences. Some films end up speaking to a particular audience who claim the film as their own. This is usually some sub-culture who often feels alienated by mainstream entertainment. Then there’s the film that is so bad, so terribly bad, that it becomes one of those human experiences that you just have to experience once in your life. This is the film that is so bad that it’s a hoot to watch just so you can make fun of it. It’s the kind of films you watch with your friends and invent drinking games to pass the time as you watch. Ed Wood was the king of those kinds of films. Today we call it schlock, and it’s the kind of film that Mystery Science Theater 3000 made their own fame riffing. That’s exactly where you’ll find Arch Hall Sr.’s EEGAH. The only reason anyone is still watching it today is because of how bad it really is. And that’s exactly why you’ll want to put this one under a film fan’s Christmas tree this holiday season. It’s so bad…it’s great. Oh, “Watch out for snakes.”

The story is as old as the monster movie genre itself. There’s a giant caveman (Kiel) living in the mountains of southern California. When the caveman happens to encounter young Roxy (Manning), he falls in love. When her Elvis-clone rock-and-roll boyfriend, Tommy (Hall Jr.) hears about the encounter, he doesn’t really believe it. The same can be said of her naturalist professor father (Hall Sr.) who takes his fancy camera and goes in search of the giant. He finds him, of course, and before long both father and daughter are trapped in said giant’s cave. Is it Tommy to the rescue? And who exactly needs to be rescued? No one gets killed here. This is a standard misunderstood monster who only wants a little love and understanding.

EEGAH was made on a shoestring budget. Truth be told, I don’t think they could even afford shoestrings.

It was made to kind of mash together a lot of the popular formulas of films in the 60’s. Tommy is in a rock-and-roll band. Shifting hips and mullet on his head, he pretends to sing along to a couple of songs in the film. Both are named after girls, but none of them Roxy, which she finally points out. Tommy is played by Hall’s song to really save money. He’s also one of the best musicians I ever saw. When he plays a guitar it sounds like there are drums, bass, piano, and even a choir of female back vocals. I’ve never met anyone who can do that.

The highlight of it all is the discovery, sort of, of Richard Kiel who was a big man and went on to play monsters in television (Kolchak The Night Stalker) and even in blockbuster movies when he starred twice as James Bond assassin Jaws, known for his strength and steel teeth.

The ADR is horrible. Seldom do words match up with lips. Kiel’s grunts ended up being overdubbed by Arch Hall, Sr. himself so they never match. Again, this was a no-budget film only created because Hall had a teen car film called Choppers on the market, and he was told he needed a double feature for the drive-in crowd to use it. The schlock factor actually helped sell the film, and it did enjoy some sold-out screenings where the kids were howling in laughter over the film. You’ll have a riot watching this one. “I swear on my Elvis Presley LP.”

Gino Sassani is a member of the Southeastern Film Critic's Association (SEFCA). He is a film and television critic based in Tampa, Florida. He's also the Senior Editor here at Upcomingdiscs. Gino started reviewing films in the early 1990's as a segment of his local television show Focus. He's an award-winning recording artist for Omega Records. Gino is currently working on his 8th album Merchants & Mercenaries. Gino took over Upcomingdiscs Dec 1, 2008. He works out of a home theater he calls The Reel World. Favorite films: The Godfather, The Godfather Part II, The Body Snatcher (Val Lewton film with Karloff and Lugosi, not the pod people film), Unforgiven, Gladiator, The Lion King, Jaws, Son Of Frankenstein, The Good, The Bad And The Ugly, and Monsters, Inc.
Hustlers (UHD Blu-ray) (4K) D-Day: Battle of Omaha Beach