Posted in: No Huddle by Brent Lorentson on December 10th, 2019 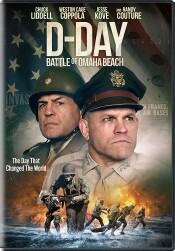 When it comes to movies that come from the The Asylum film company, you need to go into the film with the bar set pretty low. When I say low, a Troma film is nearly high art by comparison.  By some miracle their film Sharknado has found an audience, but for all the wrong reasons.  I can appreciate a cheesy B monster film; even a no-budget horror or action film can hold my interest. All I ask for is a decent story and I can forgive a film’s low budget or amateurish quality. But sometimes a movie comes along that is so bad it’s hard to find its redeeming qualities. D-Day: Battle of Omaha Beach is that film, and I can say with certainty that this is the worst film that I’ve seen this year.  It’s one thing to be a bad film, but what bothered me most about this film is how shameless it is about simply making a buck off of the lives of soldiers who actually fought in WWII.  You don’t need the budget of Saving Private Ryan to tell a good story about the war; all you need is a good story, a decent script, and some creativity, and you can make a good film.

The film is based on a true story about a group of soldiers who are sent behind enemy lines to take out some heavy-duty machine gun nests. The appeal of a “guys on a war mission” film is something I’m always willing to give a shot. The Dirty Dozen and Inglorious Bastards are two of the best films in the sub-genre, but there have been numerous films that take place in a variety of different wars. Really, it’s hard to not make a fun film in this sub-genre.  The problem is that nothing about this film is believable.  The film opens as the soldiers are prepping for the Normandy invasion; this was a huge battle that resulted in 1,000 deaths.  As for this film’s attempt to bring this battle to life, well, it looks as though it were nothing more than a minor brawl that got out of control.  Then there are the CGI ships. Really, it appears as though no attempt was made to make this look believable, but then again, while watching the invasion you’ll see numerous palm trees…I’m pretty sure there are no palm trees in France.  The costumes are a mess. I’m pretty sure I saw patches that were not properly sewn on, and then there is my favorite bit: to mark the obvious Nazi foxholes, there are big Nazi flags draped around the opening.  There is so much more to groan over, but this is only thirty minutes in.

When it comes to the dialog and the performances, they are stale and wooden and filled with the films go to line, “hoorah” (to make the film slightly enjoyable, take a shot every time a character says “hoorah”). I’m nearly certain you’ll die of alcohol poisoning by midway through the film, and you can thank me later).  I know I’m not going to be getting any Academy award winning performances here when the film’s most noteworthy stars are former UFC fighters, but none of these guys seem believable as soldiers.   Then there is the scene where the platoon of allied soldiers have a Nazi officer as a prisoner … The decision to not bind and gag him is a bold move you just know won’t end well, and how these events plan out, I’m still on the fence on if this was perhaps meant to be a comedy.

If it seems like I’m being hard on this film, well, perhaps I thought about what they were doing as the 75th anniversary of the invasion has recently passed.  A lot of men were injured and killed, and to churn this film out for a quick buck rather than memorialize these men as they deserve is a disgrace.  To the folks at The Asylum, stick to the campy sci-fi and horror; that’s your wheelhouse, and those films I can at least appreciate for what they are, but this film in particular, I’m looking forward to forgetting.

Brent Lorentson is a horror writer and film critic based out of Tampa, Florida. With a BA in Digital Film, he co-wrote and co-directed Scavenger Hunt. His short stories have appeared in various horror anthologies. In 2019 his short script Fertile Blood will be a part of the anthology horror film Slumber Party. He is currently working on his first novel A Dark and Secret Place set to be released in late 2019. Favorite Films: Taxi Driver, Fight Club, I Saw the Devil, The Wild Bunch, Dawn of the Dead, A Clockwork Orange, Pulp Fiction, Heathers, The Monster Squad, and High Fidelity.
Holiday Gift Guide Spotlight: Eegah Turtle Odyssey (UHD Blu-ray) (4K)