Posted in: Disc Reviews by Gino Sassani on December 6th, 2019 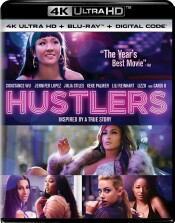 “This is a story about control. My control. Control over what I say. Control about what I do.”

Hustlers tells the “true” story of a team of strippers who found a way to turn the tables on their Wall Street clients and is based on a New York Magazine article by Jessica Pressler. It promises a pretty good time. I mean, think about it. Wall Street is the stuff of mustache-twirling villains these days. Brokers might have dropped beneath ambulance-chasing lawyers and used car salesmen as the people we love to hate. Throw in some strippers and a clever con that happens to target these modern bad guys, and it sounds like the kind of romp that has something in it for everybody. Well … maybe not the Wall Street guys who go to the movies, you might say. Did I mention it’s got strippers? At first blush the film reminds me a little too much of Paul Verhoeven’s infamous Showgirls. The problem is that the schlock value of that film has allowed it to find its place in film history, and so it has survived in all its badness. Will the same be true of Hustlers? Or will it quickly vanish into a sea of obscurity before another couple of years are over? I have to say that I suspect it’s the latter. By this time next year, you’ll be asking a friend what the name of that stripper film with Jennifer Lopez was last year. Let me know if anyone remembers, won’t you?

The real focus of the film isn’t really Jennifer Lopez at all. We are quickly introduced to Destiny, played by Constance Wu, who begins the film appearing badly miscast but ends up hitting a rather strong stride by the middle half of the movie. She’s trying to earn her living as a stripper and can’t seem to get a handle on how to rope in the big money. When she watches Ramona (Lopez) enter the room, she can’t help but be captivated by how she immediately demands the room’s attention. In an act that appears effortless, Ramona has mastered the art of seduction, and men are falling over themselves to shower her stage with cash. By the end of the performance she’s swimming in the money that litters the floor, and Destiny wants to know how to do that. She ends up being taken under Ramona’s wing, and the two form a rather close bond. The film quickly drives forward with a montage of the excess and success leading up to the big 2008 crash. The crash hurt the Wall Street guys who came to the club, and business dries up just as swiftly as it came.

In another of the film’s awkward time-jumps, we see Destiny starting a family. She has a child, and in another montage series of events, she’s eventually left alone and broke. She returns to the ruins of the club, but when she ends up seeing Ramona again, they quickly rekindle the friendship. But times have changed, and the stripping game isn’t going to meet their needs or wants. That’s when four of them form a team and run a con on the remaining rich clients that nets them more money than they could dream of making as strippers. The idea is pretty simple. One of them hooks a rich client at a bar and slips a drug into his drink, a drug of their own creation that also delivers one of the best on-the-floor-funny scenes of the film. Once the mark is pretty out of it, they take him back to the strip club and run up a huge tab on their credit cards. They split the take with the club, and it’s going along pretty well until they decide to expand the family and a careless newcomer rats them all out.

Director Lorene Scafaria tries too much to be Martin Scorsese, and the film attempts to strut the style of Goodfellas. Most of the film is narrated by Destiny talking to a reporter about what happened. She’s not a particularly reliable narrator, but that’s kind of OK. It’s these music-filled action montages that appear ripped straight from Scorsese that weaken any of the cleverness the film begins with. The first third of the film is engaging and rather original. The characters are compelling, and it’s a return to form by a somewhat-MIA Jennifer Lopez. All is right with the world. But instead of using those character moments of the story to carry us forward, Scafaria begins to rely solely on the montage, so that we see countless victims of the scam with the girls doing the same thing over and over again. We never get invited inside, really, and the wonderful characterizations soon melt into dry, rote storytelling. What Scafaria never sees in those Scorsese moments is how he wraps these montages around powerful character moments. Scorsese not only allows you to get inside of the character’s heads, but he blatantly invites you to be part of the gang. And that’s Scafaria’s fatal flaw. She never let us in the gang after dangling those family moments in front of us only to have it pulled away, and the bare hook is all we really get to grab.

Hustlers is presented in its original aspect ratio of 2.39:1. The ultra-high-definition 2160p  image is arrived at by an HEVC codec with an impressive average bitrate of 65-70 mbps. The digital shooters are learning. While the film was shot in digital 2K, it comes from a native-4K intermediate. The difference it makes in sharpness and detail should not be underestimated. In the club that means a sense of depth and a longer focus field where you can read signs on the walls and enjoy the textures of what little there is of the performing costumes. The low light of the club atmosphere is the perfect challenge for the HDR. The superior contrast also brings out the details of these performances, and the close-ups take you intimately close to the girls in action. You can see the intentional gaudy makeup that is the standard of the scene. This is the night life, after all, so most of the film relies on excellent black levels to deliver that all important shadow definition. Outside of the club the movie is awash in whites from an apartment and all of its furniture. There’s even a white Christmas tree, and the transfer delivers them without any of the harshness and glare that you’d find on a Blu-ray version of a film like this.

The Atmos track defaults to a pretty solid 7.1 mix. Inside of the club the surrounds are extremely immersive. From the music to the patrons to the action itself, it surrounds you in a wall of sound that doesn’t overwhelm but rather places you comfortably in the atmosphere. During the actual dance numbers the music takes over, as does the sound of the crowd. In all of that clutter of sound, you can still hear dialog clearly. In fact, you can actually make out words from the audience chatter and even hear the sound of dollar bills being peeled from a bankroll. There is a score, but most of it is dominated with source music, which makes a lot of sense for this film. In addition the subs will deliver the pounding beats that dominate the club scene today.

The only bonus features are an Audio Commentary with the director and two trailers.

Hustlers is fine for a fun little getaway, but it will never be the cultural icon or classic it obviously wants so much to be. It’s R-rated, but the stripping is really rather tame, more suggestive than graphic, which is exactly what a good striptease should be. The film gets a lot of things right, but there’s never any follow-through, and I felt that I was kept too far at a distance when it was time for me to care. So I didn’t. So much the loss. Scafaria should have gotten Marty on the phone and cried, “Send help!”

Gino Sassani is a member of the Southeastern Film Critic's Association (SEFCA). He is a film and television critic based in Tampa, Florida. He's also the Senior Editor here at Upcomingdiscs. Gino started reviewing films in the early 1990's as a segment of his local television show Focus. He's an award-winning recording artist for Omega Records. Gino is currently working on his 8th album Merchants & Mercenaries. Gino took over Upcomingdiscs Dec 1, 2008. He works out of a home theater he calls The Reel World. Favorite films: The Godfather, The Godfather Part II, The Body Snatcher (Val Lewton film with Karloff and Lugosi, not the pod people film), Unforgiven, Gladiator, The Lion King, Jaws, Son Of Frankenstein, The Good, The Bad And The Ugly, and Monsters, Inc.
Where’d You Go Bernadette? (Blu-ray) Holiday Gift Guide Spotlight: Eegah