Posted in: Disc Reviews by Gino Sassani on December 10th, 2019 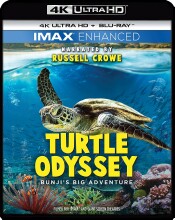 IMAX films are the perfect source material to show off the capabilities of the UHD Blu-ray/4K format. Most of the films we watch in theaters today have been shot around 2.8 K and mastered at just 2K. A 35mm film actually shot on film has a native resolution of 4K. The IMAX film format uses 65mm and 70mm film that increases its native resolution well beyond our 4K televisions and players. They are relatively short and have a ton of bandwidth to deliver the best possible image and audio. Shout Factory discovered this as soon as the format was launched, and Upcomingdiscs was there to check them out. The titles have slowed down in the last year, but they haven’t stopped. And just in time for Christmas, you can take a journey down under to visit with beautiful sea turtles in Shout’s new IMAX masterpiece, Turtle Odyssey.

Meet Bunji. She’s a sea turtle, and when we first encounter Bunji, she hasn’t even been born. She’s the last turtle to hatch out of a clutch of eggs that have been buried under the sands of Australia by a mother who has months ago already departed this area. Bunji must work her way to the surface where she faces a gauntlet of deadly challenges just to make it to the water. Hungry birds dive all about her, but she eventually makes it to the relative safety of the ocean, and we’re about to follow her life.

Bunji spends much of her young life adrift in sea grass that not only provides her with comfort and safety, but it also lends her transportation and food. Once she’s old enough to fend for herself among the dangers of the sea, she leaves the grass and embarks on a 700 mile migration to an area rich in coral and food. When she reaches 25 years, she is compelled to return to the place of her birth. There she will find a mate and deposit eggs on the same beach she once emerged from. She’ll do this every four to five years, and the cycle goes on.

With the kind of image clarity you find here, you’ll fall in love with Bunji, to be sure. There’s plenty of other life in the sea to supplement the experience. It’s narrative with a kind of whimsical and gentle authority by Russell Crowe. He’s well matched to his subject and narrates without ever appearing intrusive or distracting. The script keeps it all pretty simple and allows you the freedom to explore these amazing images throughout. This is how you show off your 4K equipment. The image is truly breathtaking.

Turtle Odyssey is presented in an aspect ratio of 1.78:1. The ultra-high-definition 2160p image is arrived at by an HEVC codec with an impressive average bitrate of 85-90 mbps. Like most of these IMAX films the aspect ratio has been somewhat compromised for our widescreen television sets. They call it enhanced for widescreen televisions. Not sure I would use that term. Fortunately the aspect decision doesn’t appear to warp the image in any distracting fashion. These IMAX films are shot on 65mm and 70mm film and have a native resolution in excess of the 4K provided here. You get a stunningly realistic image of the colorful life that lives amid these reefs. I have had the chance to dive the reefs of the Florida Keys, and this is pretty much what you get. The only way it could have been more immersive is if the screen itself surrounded you in a VR cocoon. This is why IMAX is such a good candidate for UHD. The HDR colors bring out not only the vivid hues of the fish but the textures and sharp lines that define their look. You get to see these turtles as if you were encountering them yourself.

The Atmos track defaults to a rather standard 7.1 presentation. The audio is there to bring us the narration and dialog. We can hear all of that clearly. The audio presentation throws us a bit of spice from time to time where we feel like divers and can hear our own breath bubbles. We get a wider sound field during the score highlights, and under the water you get that feeling of being surrounded by this alien environment.

The bonus feature is on both the UHD and regular Blu-ray copies of the film.

IMAX on UHD is something I’ve been a huge advocate for. It’s a way to preserve these films in a format that allows the viewer to capture that experience as closely as is possible in their own home theatres. This is actually one of the very best I’ve encountered.  It’s both engaging and educational. It’s entertaining and yet still enlightening. It’s the kind of film the whole family will enjoy. How often have I had the opportunity to say that in recent years? “Welcome to Turtle Odyssey.”

Gino Sassani is a member of the Southeastern Film Critic's Association (SEFCA). He is a film and television critic based in Tampa, Florida. He's also the Senior Editor here at Upcomingdiscs. Gino started reviewing films in the early 1990's as a segment of his local television show Focus. He's an award-winning recording artist for Omega Records. Gino is currently working on his 8th album Merchants & Mercenaries. Gino took over Upcomingdiscs Dec 1, 2008. He works out of a home theater he calls The Reel World. Favorite films: The Godfather, The Godfather Part II, The Body Snatcher (Val Lewton film with Karloff and Lugosi, not the pod people film), Unforgiven, Gladiator, The Lion King, Jaws, Son Of Frankenstein, The Good, The Bad And The Ugly, and Monsters, Inc.
D-Day: Battle of Omaha Beach It: Chapter Two (UHD Blu-ray) (4K)