Jumanji The Next Level

Posted in: The Reel World by Jeremy Butler on December 17th, 2019 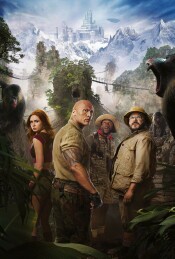 “Welcome back to Jumanji!”

It would seem that welcoming the audience back to the jungle is in order. Now here is a sequel that when I heard it was being made, all I could do was shake my head. I just couldn’t fathom a reason for a sequel to be made. The film was already a continuation of the previous installment. I also couldn’t fathom a worthwhile story being told. And if it wasn’t for the hard work of Jack Black, who basically made the movie, I believe that my opinion would not have been changed otherwise. After barely escaping the game the first time, the group finds themselves drawn back into the world of Jumanji in order to save one of their own. However, the stakes are higher, as not only is the gang venturing into brand new territory; they are hampered due to being saddled with two new players in the form of franchise newcomers Danny DeVito and Danny Glover. The previews did not do the film justice, as it truly turned out to be far better than I was initially anticipating. It does get a bit long-winded, but for the most part it is a good, fun, and funny return to the established universe.

After a year away at college, the gang returns to their hometown for winter break with plans to meet and reconnect. They are all looking forward to this, all but Spencer, who since moving to New York finds himself struggling with his identity and the confidence boost that he received after becoming Dr. Bravestone (Dwayne Johnson). Eager to regain that part of himself, he decides to go back into the game. When the gang discovers what he’s done, they are forced to enter the game to help get him out. Picking up the controllers again, Bethany (Madison Iseman), Martha (Morgan Turner), and a reluctant Fridge (Ser’Darius Blain) find themselves transported back into the world of Jumanji. Expecting things to be easier this go-around following the previous victory, the gang finds that everything has changed, including their characters. Complicating matters, Spencer’s grandfather (Danny DeVito) and his friend (Danny Glover) have also been transported into the gang. Forced to bring the new players up to speed, as well as battle a new enemy in an unfamiliar landscape, while not in their original avatars, the group will have to find and rescue Spencer without losing their three lives. This truly is the next level.

I must reiterate that no one was more skeptical about this sequel’s ability to entertain than I. I saw this as an obvious money grab, an opportunity for the studio capitalize on the star power of Dwayne Johnson, Kevin Hart, Jack Black, and Karen Gillam. I expected the content to suffer as a result. The film does have periods where it is outlandish and long-winded, but overall it is a enjoyable family-friendly experience. This is in no small measure thanks to Jack Black, who provides a great deal of the comic relief for the film. Hart and Johnson do their best to aid in this endeavor, but it only results in the occasional good laugh. Black, however, is on his game, displaying his talents as a character actor. His delivery is so authentic that at some points, I would swear I could imagine the person he is representing truly is inside him. This time around he is doing some serious double duty, as he taking on role of more than just one character. The circumstances of this I will leave a mystery, but let’s just say, no matter who he is pretending to be, he does them justice.

The central story is well-developed and relatable, dealing with main theme of identity. Spencer (Alex Wolff) has an important arc and is the film’s catalyst, as he deals with desire to regain something that he only just found: his confidence. His character does disappear for a period, causing the audience to focus on the dynamic between the rest of the gang; there is a subplot involving DeVito’s and Glover’s characters as they reconnect after years of not talking. Truthfully, this doesn’t really add much to the story; in my opinion, it’s predominantly filler. Though there is a significant moral to it that plays out later on. In regards, to the newcomers, I categorize them as a one-off. Their inclusion worked this time around; they even managed to provide a few laughs themselves, but that is a one-trick pony.

At this point it is very clear that this series is intended to become a franchise. However, I do not have the same skepticism that I had at the beginning of this film, partially because it has already been able to prove me wrong. That is only part of it, though, which is why I’m going to urge you all to stay for the mid-credit stinger, as it sets up a potential storyline for the next film that has renewed my faith in the series. I’m fairly sure that you are looking at the weekend box office winner here. There are still a couple movies that could hinder it, but the film has given me renewed confidence to take the crown.

Jeremy Butler is a film school graduate of the International Academy of Design and Technology. He is been writing for Upcomingdiscs since 2012; however, movies have played a big part of his life for much longer. Favorite genres include horror, science fiction/fantasy, and comedy. Favorite movies are V for Vendetta, Boondocks Saints, Kiss Kiss Bang Bang, and The Godfather.
It: Chapter Two (UHD Blu-ray) (4K) Killerman