Posted in: No Huddle by Jeremy Butler on December 17th, 2019 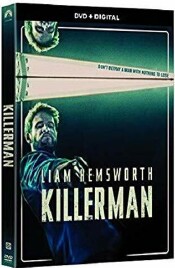 Well, I’m not fully sure how to put my experience with Killerman into words, but I will give it my best shot. The feeling that comes to mind is confused. It just seem to be a lot of different things thrown at me at once. Liam Hemsworth is introduced as Moe Diamond, a small-time money launderer partnering with the nephew of a powerful crime boss; the nephew chaffs under the thumb of his uncle, and it is very clear that he is the less intelligent one of the partnership. Moe is level-headed and appears to have an elegant system in place for laundering money through his jewelry business. The nephew, who goes by the name Skunk, played by Emery Cohen, is clearing only involved because of his connection to his uncle. Needless to say, I imagine you can see where this is going, I mean, we have only seen it dozens of times in other movies, but I’ll go ahead and repeat it for posterity: the uncle gives the boys the opportunity at a big-time score; the pair get wind of a too-good-to-be-true drug dealing opportunity, and decide to use the uncle’s cash to front the deal. As expected the deal really does turn out to be too good to be true, leading Moe and Skunk to be on the run from a dirty cop when they escape the deal with both the cash and the money. To the film’s credit, this is the extent of the movie’s predictability, as matters take an unexpected turn.

While escaping their pursuers, the pair has a very bad accident, resulting in Moe developing amnesia. I know I said predictive stuff was over, but this aspect does have an interesting twist. Normally, when presenting this kind of plot, the rest of the film is spent delving into the protagonist attempting to solve the mystery of who he really is. Killerman deviates from that trend, because we have a buddy to explain to Moe exactly who he is. That aside, he still goes through the expected emotions of confusion attached to a self-identity crisis. Though his circumstance is quite tragic, I was never able to form any kind of investment into this character. He was just too unhinged for me. He was initially interesting; he was clever and clearly had some loyal friends, but there was always something about his personality that was shrouded in mystery.

It was almost as if the movie could sense this idea, as around this time came the introduction of a secret girlfriend, played by Doom Patrol’s Diane Guerrero. However, this did nothing but further remove me from being able to identify with the character, because his actions before this introduction were less than honorable. Granted the character has an obvious excuse to explain it away, but this is merely a Band Aid for a bullet wound. Going back to character’s instability, it is very clear that he is a polar opposite of how he was first introduced. He has a hair trigger, which is demonstrated at several points, and it is left to the lesser member of the partnership to rein him in. Given that this character is not exactly the sharpest person, it caused me to doubt the pair’s ability to survive their predicament. Going back to Guerrero, her screen time is limited, but for her period, she is a bright spot for the film in this role that is far different than that of her DC series character. She was able to rein in Hemsworth, and I would have liked for to have played a larger role in the events to follow, I believe that would have gone a long way toward improving the film.

The second half of the film just descends into a full-blown revenge movie that is too farfetched to be believed. On the one hand, we have Skunk’s uncle, who does not appear to be worthy of the clout and fear that he inspires in others. There is nothing to suggest that he should be the head of a criminal enterprise. There is no cunning, and I didn’t find him particularly menacing. The only thing that he seems to have going for him is the dirty FBI agent he has feeding him information. Speaking of dirty cops, there are at least two who serve as the film’s primary antagonists, and like the uncle, they fail to be all that convincing. They are more brutal than the uncle in the methods that they utilize to gain information; I will give them that. It’s just the way they go about trying to recover the drugs and the money is loud and messy. I would have expected that officers trying to keep the knowledge of their theft from the precinct would exercise more discretion. I mean, these guys are dropping bodies left and right, as well as discharging their firearms against unarmed suspects in full view of the public. The actions just don’t match the circumstances.

The film’s final twist was also something that I had predicted early on in the film. This along with a character’s reaction to this revelation are very predictable. Simply put, Killerman is just all over the place. The villains are not the threat that I expected them to be; the protagonist has no real redeeming qualities and goes against the grain of previously established personality. There are few enjoyable things about the experience, and then to top it all off, it turns out that the situation was based off true events. Establishing this fact earlier on might have gone a long way towards shaping my view of the movie. As it stands, like I said earlier, I’m just confused.

Jeremy Butler is a film school graduate of the International Academy of Design and Technology. He is been writing for Upcomingdiscs since 2012; however, movies have played a big part of his life for much longer. Favorite genres include horror, science fiction/fantasy, and comedy. Favorite movies are V for Vendetta, Boondocks Saints, Kiss Kiss Bang Bang, and The Godfather.
Jumanji The Next Level Once Upon A Time In Hollywood (Blu-ray)