Posted in: Disc Reviews by Brent Lorentson on December 12th, 2019 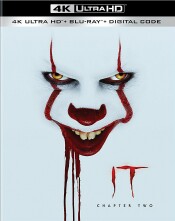 “This meeting of the Losers’ Club has officially begun.”

I don’t think I’d be exaggerating by saying It Chapter 2 might be the most highly anticipated horror film in quite some time. Two years ago when the first It hit the cinemas, sure, I expected it to be a hit, but the film went on to be a pop culture sensation.  Pennywise was already well known because of the books by Stephen King, but also because of the loyal fan base of the 90’s mini-series.  Debates were heated about which Pennywise was better and more terrifying, while other debates went on about which adaptation was better.  I always felt it was unfair to compare this new version to the mini-series simply because we only had half a film, and now finally this weekend we have the conclusion to the story about our favorite Losers’ Club, only instead of teenagers they are all grown up.  Now that the wait is over, how does this film stack up alongside the first half and the mini-series? Well, I’ll say it’s better than the mini-series but doesn’t quite have the magic of the 2017 film.

It Chapter 2 starts off strong with a scene right out of the book, a vicious hate crime that results in Pennywise (Bill Skarsgard) plucking the victim from the river, but instead of saving the young man, he devours him.  This is a strong opening and should work as a strong reminder of just how evil this character is. This also cues Mike (Isaiah Mustafa) to reach out to the members of the Losers’ Club for them to return to Derry and to make good on their promise to return home if Pennywise were ever to return.  This sets up a lengthy bit of film where we get to catch up with all the characters and how they’ve grown over the years. Richie (Bill Hader) is now a comedian, Bill (James McAvoy) is a successful writer, Eddie (James Ransone) works in risk management, Beverly (Jessica Chastain) is in an abusive relationship, and Ben (Jay Ryan) seems to have changed the most by shedding the extra pounds and has become a successful architect. As for Stanley, well, for those who read the book you know what happens, and for those who haven’t, while his character is crucial to the film, it’s better that you see this character unfold for yourself.

When everyone gets together in Derry and they have dinner and catch up at a Chinese restaurant, I was hoping the pacing would sort of work itself out, but considering this is nearly a three-hour film, it just moves along at a fast pace.  This is one of the key problems over the course of the film; the film is never given a chance to breathe, as so much plot seems to be crammed in we unfortunately don’t get to see these former best friends rekindle their relationships; it just seems to happen.  Richie and Eddie are really the only ones who have believable chemistry, though towards the end we get to finally see Ben and Beverly spend time together. Another massive problem that goes along with the pacing issue is how the Pennywise sequences are played out.  Honestly, this reminded me of the Nightmare on Elm Street films (not the original, but instead Dream Warriors and Dream Master)  We get a little bit of story, then it’s set up for a creepy location where Pennywise jumps out to do something over-the-top and scary.  The first couple times it works, but as it keeps happening, the scares kind of lose their punch.  I wonder how much of this was intentional considering that in the 2017 film and this film we see a marquee that advertises A Nightmare on Elm Street 5. Is this the director’s subtle way of campaigning for helming a new Nightmare film, or just a coincidence?

Now, not everything is bad; in fact, there is a lot to like about this film.  But the standout from this film is Bill Hader and his performance as Richie.  I wasn’t sure about this casting, but I have to say he is great in this film; he pretty much steals every moment of this film, whether it’s because of his humor or some of the emotional moments of the film, he simply delivers. The chemistry between Bill Hader and James Ransone is one of the pleasant surprises. Seeing these two bicker together is without a doubt one of the film’s highlights. But this also leads to something heavily implied in the film that I disagree with.  I only have an issue because while time is wasted on this topic there are plenty of other issues that are brought up over the course of the film that are simply left unresolved.

For instance, Henry Bowers (Teach Grant). Sure, we get answers that we were asking for from the first film, like if he survived the fall, but here there are some other issues that we simply need to take at face value, like a zombie driving a car.  There is more, but there are certain things I just don’t want to spoil for anyone.

While it was nice seeing the kids from the first film, I feel director Andy Muschietti relies too heavily on using the kids and including flashbacks where it distracts from the adult versions of these characters.  Sure, it’s one thing to have a flashback or two, but the kids are actually in a lot of this film, and because of it there is a lot of story that isn’t covered.  For instance the Ritual of Chud, which Mike has discovered may be the true way to kill Pennywise, as well as the origin of Pennywise.  These are things that are complicated enough in the book, and the way they are shoved in this film, I feel like it was almost a disservice to the story, because it seemed to only complicate the story more.

It: Chapter Two is presented in its original aspect ratio of 2.39:1. The ultra-high-definition 2160p  image is arrived at by an HEVC codec with an impressive average bitrate of 70-75 mbps. It’s a bit disappointing that this is really an upconverted 2K original shoot and intermediate. Still there is an upgrade in the detail that makes a considerable difference. The facial features of Pennywise are superb, and the detail of the wonderful facial expressions is worth the price of the 4K. It’s a dark film, and the HDR adds wonderful contrast that blends rather perfectly with the creepy atmosphere the film provides. That contrast also is stunning when Pennywise’s white and red face is glaring out o a background of total blackness. As you might expect, black levels are deep and offer tremendous shadow definition.

The Atmos track defaults to an atmospheric 7.1 mix. When you are down in those underground spaces, the surround immerses you so completely and without being overly aggressive in the surrounds. It’s those subtle sounds and echoes that bring you right there. In the climax the phase weapon fills up the room so completely that it actually took me by surprise. The subs are deep and allow things to really do some bumping in the night. The score offers the perfect atmospheric moments, and dialog is always clear and present.

The extras are all on a second Blu-ray disc.

The Summers Of It: Chapter One – You’ll Float Two: (35:38) This is pretty much a behind-the-scenes feature for the first film. The focus is on casting the kids with audition footage and plenty from the kids themselves. There’s also some good stuff on the creation of the look of Pennywise.

The Summers Of It: Chapter Two – It Ends: (39:30) This time the focus is on this film with most of it dealing with matching the kid/adult actors/characters. This time there’s more motion-capture work for Pennywise, and we get a great glimpse into that process. There’s also coverage of the Stephen King cameo.

Pennywise Lives Again: (4:55) Contains a lot of material from the first two features. Not much new here in this profile of Pennywise.

This Meeting Of The Loser’s Club Has Officially Begun: (8:12) A look at the kids, but almost all of it is repeated material

Getting back to the good stuff, as we see the adult Losers retrieving tokens from their past, we get some fun scares in the process, and it features a fun little scene where Stephen King makes an appearance. There’s a running joke over the course of the film about how Bill manages to write great stories but is terrible with endings. This is more amusing because the same complaint can be made about King’s books over the years.  While I’m a fan, I’m inclined to agree with the assessment, not that they are bad, but that they simply don’t meet the expectations we as readers hope for.  For many I feel this film will be the same way for viewers, where they will feel let down because it didn’t meet their expectations. Overall the film is entertaining, but it just didn’t hold up to the first chapter, a film I feel comfortable calling a modern classic.  Sure, the expectations were high, but with this cast and the budget I really felt they had a knockout on their hands. On the bright side, in another 27 years or sooner I’m sure we’ll see Pennywise make his way back to the screen again to terrify more audiences.  For those who are impatient, you can always crack open the book; after all, it’s like they say, the book is always better than the movie.

Brent Lorentson is a horror writer and film critic based out of Tampa, Florida. With a BA in Digital Film, he co-wrote and co-directed Scavenger Hunt. His short stories have appeared in various horror anthologies. In 2019 his short script Fertile Blood will be a part of the anthology horror film Slumber Party. He is currently working on his first novel A Dark and Secret Place set to be released in late 2019. Favorite Films: Taxi Driver, Fight Club, I Saw the Devil, The Wild Bunch, Dawn of the Dead, A Clockwork Orange, Pulp Fiction, Heathers, The Monster Squad, and High Fidelity.
Turtle Odyssey (UHD Blu-ray) (4K) Jumanji The Next Level