Posted in: Disc Reviews by Brent Lorentson on January 15th, 2020 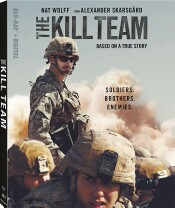 This is yet another war film that is “based on true events”.  Considering how long troops have been over in Afghanistan, it’s no surprise how many films seem to be coming out about the subject.  I’ll admit going into this film I didn’t exactly have high hopes, but I’m pleased to say not only did the film not disappoint; I found myself actually enjoying it. Granted this is no 1917, but it’s definitely better than the dumpster fire film that I reviewed about a month ago called D-Day.  The Kill Team follows new recruit Andrew Briggman (Nat Wolff), who is wide-eyed and ready to see combat, but once he is confronted with the very human side of the war that the troops are facing, well, his conscience begins to weigh him down, and things only get more complicated for him as his time in Afghanistan stretches on.  From the start, the film seems to have a very idealistic view on how the soldiers can and should act, and it’s this “moral compass” that gets in the way of telling the story.  When it comes to war films that delve into the cruelty that occurs, you can’t let morals dictate the story. It’s the equivalent of doing a western where the bad guy wears the black hat and the good guy wears white.  Sure, you’re spelling it out for your audience, but when depicting real life, it’s never quite that easy to tell wrong from right.

The film wastes no time in getting us into the story, as we see Briggman on his last day being a civilian to him being in Afghanistan.  He seems disappointed that instead of seeing combat he’s stuck with his team travelling to villages attempting to build relationships with them, but things quickly go sideways after an explosive takes out his Staff Sergeant.  It doesn’t take long before a replacement comes in, and it’s Staff Sergeant Deeks (Alexander Skarsgard) who comes in to make some changes to the unit. He’s not about being friendly with villagers; instead, he’s ready to hunt down some bad guys responsible for making bombs that have killed numerous soldiers over the year.  Here’s the thing: I was onboard for this being about a military unit simply out for blood killing potential terrorists. If you’re going to do a film about morally corrupt soldiers, I figure you just go all in and make them a ragtag team of anti-heroes.  Well, writer and director Dan Krauss had other plans, and instead focuses on the inner termoil Briggman is going through about his unit murdering “innocent” people.  Because Krauss previously directed a documentary about soldiers that were involved with the same situation, he uses his insight to deliver a very grounded take on the subject matter.

The performances from Wolff, Skarsgard, and the rest of the cast are what kept me interested, but I have to admit I felt conflicted on how I felt about these characters and the situation they were in.  Perhaps that’s the point Krauss was trying to make.  The stakes get ramped up once Deeks discovers there may be a rat in his unit. What I found a bit unrealistic is how anyone in the unit could trust Briggman after seeing how he acts.  It’s hard to believe the entire unit doesn’t suspect Briggman earlier in the film, but the film really does step up the tension once we see Briggman find himself in situations where there is genuine concern that someone in his unit may actually take him out.

What helps make the film feel a bit immersive are the wide lens shots that have us up close with the soldiers, whether it’s on the battlefield or relaxing in their tents.  It helps give it a more documentary feel, as though these events are really unfolding in front of the camera, though as grounded as the film may feel, it constantly seems to pull its punches.  If we’re supposed to be on board with this unit being filled with bloodthirsty soldiers who are in it for the thrill of the kill, then show us these cold-blooded kills.  Instead what we get are glimpses from afar as Briggman sees them, and honestly, he comes off as an unreliable witness.

The relationship between Briggman and Deeks is what is most intriguing.  It’s like a mini game of cat and mouse that the characters are playing with one another, but neither is willing to admit to the other what they know is going on, though it’s quite obvious the characters’ are on to one another.  This could have been so much more if the characters didn’t reveal so much to one another. Nothing’s more frustrating than when you can figure out how things are going to end well before the characters do.

The Kill Team is presented in the aspect ratio 2.39:1.  The 1080p image is arrived at with an AVC MPEG-4 codec at an average of 28 mbps.  For the most part this is a pretty good transfer, but with some of the drone shots and where CGI is used there seemed to be some artifacts, but nothing really distracting.  The skin tones look natural, though the color is a bit saturated.  Color doesn’t seem to pop at all in this film, but it adds to the dusty, hot atmosphere the filmmakers were creating.

The DTS-HD Master Audio 5.1 track is impressive for this being a non-theatrical-released film.  The sound mix is on point, delivering clear dialog as well as attention to the ambient sounds to the gunfire and helicopter sounds moving across the speakers.

Commentary with writer/director Dan Krauss: When it’s a solo track, it can be hit or miss, but thankfully Krauss is able to keep this commentary informative without being boring but with very few quiet points.  Because of his work on the documentary on the same topic, this does add more depth to the film.

The Reality of Courage: Making The Kill Team (11:45) Considering the director did a documentary on the subject, I’m surprised there was not a more comprehensive documentary attached.  But this discusses the true story as well as the behind-the-scenes effort of making the film.

Deleted Scene: There is only one deleted scene, and I won’t get into the details, simply because the scene could very easily change a viewer’s outlook on a pivotal character and possibly the film.  It was a smart move cutting this scene, but it definitely impacts the story.

While the film seems to restrain itself from going to a dark place, this is still an engaging story.  The performances between Wolff and Skarsgard are what keep this film interesting, but I wouldn’t say this is one that is all too memorable.  If you’re a sucker for war films, this is something worth checking out, but don’t go in expecting 1917 or Saving Private Ryan.

Brent Lorentson is a horror writer and film critic based out of Tampa, Florida. With a BA in Digital Film, he co-wrote and co-directed Scavenger Hunt. His short stories have appeared in various horror anthologies. In 2019 his short script Fertile Blood will be a part of the anthology horror film Slumber Party. He is currently working on his first novel A Dark and Secret Place set to be released in late 2019. Favorite Films: Taxi Driver, Fight Club, I Saw the Devil, The Wild Bunch, Dawn of the Dead, A Clockwork Orange, Pulp Fiction, Heathers, The Monster Squad, and High Fidelity.
The Orville: Season Two Beverly Hills Cop 3-Movie Collection