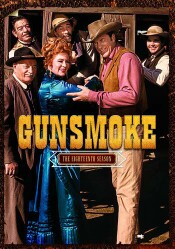 Gunsmoke was the longest-running scripted live-action television show in history until just this year when Law & Order Special Victims Unit started their 21st season. The series ran from 1955 to 1975. It still has the most episodes of any live-action scripted shows in history with 635 compared to SVU‘s 480. You have to understand that in the show’s earlier years a series would roll out 35-40 episodes a year compared to a network average of 20 in 2019. A great number of shows air considerably less episodes in a season. At first it was a half-hour black-and-white show that evolved into a color hour by 1967. It actually started before the days of television, premiering on radio in 1952. Then it was William Conrad as the tough-as-nails Marshall Matt Dillon. When television came into its own, Gunsmoke made the jump to the bright living room box and made history. Westerns would ride across our small square screens for the next three decades, making it the most successful genre of that time, and it was Gunsmoke that started it all. The television version of Gunsmoke was originally conceived as a vehicle for John Wayne, who opted to remain in movies. Yet it was Wayne himself who suggested James Arness, and it turned out to be a career for the one-time “carrot” monster from The Thing. Gunsmoke started before all of the big westerns and was around when most of them had departed.

The 18th & 19th seasons are now out, and we’re closing in to that last handful of episodes in the 20th season. Your long wait for a completed series is about to be rewarded. This time both seasons come in full season releases so that you don’t have to deal with those silly half-season releases. I suspect this is exactly how the final season will arrive, and hopefully soon. Season 18 delivers 24 episodes on six discs, and Season 19 delivers another 24 episodes, also on six discs.

Highlights from the two seasons include:

Season 18: The season starts with a two-part episode titled The River. Matt Dillon is the only regular in the two episodes. He’s running from crooks who chase him because he has their bank haul. Matt has to protect two orphan kids in the wilderness while these bad guys hunt them down. It’s one of the more intense episodes of the series and a terrific platform for Arness to demonstrate a wider range of his acting abilities. Bohannon pits Doc against one of those faith healers who blow into Dodge. The Fugitives returns to a very common plot device on the show. It seems at least a couple of times a year one or more of the cast members get kidnapped. This time it’s Doc and Festus who are forced to help some outlaws, but what if the patient can’t be saved? The episode also features Gilligan’s Island’s Professor Russell Johnson and Alice‘s Mel, Vic Tayback. Kitty has to shoot and kill a bad guy, and now the man’s brothers are looking for revenge in The Brothers. In Hostage, it’s Kitty who gets kidnapped. See what I mean about a common plot device? This time it’s to blackmail Matt into releasing a killer due to be hanged. In Arizona Midnight a stranger comes into town claiming to be a were-elephant. No, his name isn’t Talbot. But a guy named Talbot does ride into town in an episode named Talbot. He’s courting the widow of a guy he killed in self-defense.

Season 19: Another two-parter opens the season. This time it’s Women For Sale. Matt’s tracking down some missing women and discovers a sex slave trafficking ring and attempts to rescue the girls. The narrator is William Conrad, who also played Matt Dillon on the radio before Arness. In Matt’s Love Story, Matt Dillon is left for dead by an outlaw. He ends up under the care of a young widow. To complicate things, Matt has lost his memory and falls in love with his caretaker. In Kitty’s Love Affair, it’s Kitty who falls in love. Her new interest has a big bounty on his head from a previous relationship. The season ends by putting Matt’s future and maybe his life is in jeopardy in The Disciple, where Matt’s gun hand is damaged.

Guest stars in these two seasons include:

This is not the end of the road for Gunsmoke. We still have one more season coming, and I suspect it will be soon. Pick these up now, to be sure, but for crying out loud, make sure there’s a slot on the shelf for one more DVD case. “I just didn’t want you to do anything stupid, that’s all.”

Gino Sassani is a member of the Southeastern Film Critic's Association (SEFCA). He is a film and television critic based in Tampa, Florida. He's also the Senior Editor here at Upcomingdiscs. Gino started reviewing films in the early 1990's as a segment of his local television show Focus. He's an award-winning recording artist for Omega Records. Gino is currently working on his 8th album Merchants & Mercenaries. Gino took over Upcomingdiscs Dec 1, 2008. He works out of a home theater he calls The Reel World. Favorite films: The Godfather, The Godfather Part II, The Body Snatcher (Val Lewton film with Karloff and Lugosi, not the pod people film), Unforgiven, Gladiator, The Lion King, Jaws, Son Of Frankenstein, The Good, The Bad And The Ugly, and Monsters, Inc.
White Snake (Blu-Ray) Warner Brothers Archive Round-Up: Roswell, New Mexico Season 1, You Season 1, Hanging With Mr. Cooper Season 3