Posted in: Disc Reviews by Michael Durr on February 12th, 2020 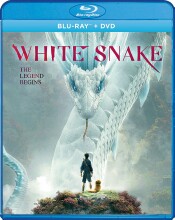 A common thread in fairy tales and stories of long ago is for there to be a perfect female that is amazingly romanced by a not-so perfect male.  In fact, he is usually average, clueless, and clumsy beyond belief.  During the narrative, we realize that the female is only perfect on the outside and is somehow flawed on the inside.  In the end, they live happily ever after.  The story changes sometimes in details, genders, and other minor pieces of information, but is overall the same in theme.  Today, we explore White Snake, which is a prequel to the Chinese fable, Legend of the White Snake.  Let’s take a look.

Feathers fall to the earth and sea; a giant snake slithers along the ground below.  The reptile goes behind a rock, and out the other side comes a beautiful girl named Blanca.  She starts to float and then chants magic words as she falls into white nothingness.  Strings with hands reach out to grab her from all sides and she struggles to break free.

Her sister in a green dress named Verta saves her from the peril and wakes her up.  Blanca tells her sister that she lacks something to make the ritual work.  Verta reaches from behind her head and produces a green hairpin to help her.   Verta mentions that the hairpin was always hers anyway.  Blanca starts to spin around, and that’s when we get the credits screen.

Let’s set the story back five hundred years.  The Tang was in chaos, and demons haunted the world.  The Emperor, dabbling in Taoist sorcery, was in search of eternal life.  Somewhere outside, we see Blanca start to take down guards as she makes her way to assassinate the Emperor.  Once the treacherous figure is in sight, she aims her green hairpin for the sorcerer.  It is stopped by magic and doesn’t reach its intended target.  Suddenly guards and other magicians overtake the young woman.  As she tries to fight them off, she falls into the water, and everything fades to black.

Blanca wakes up in a cabin without her memory and alone.  After a few minutes and exploring her surroundings, an old woman walks into the room and talks to her.  She is in Snake Catcher Village, which is named due to the fact that they capture more snakes than any other village.  The creatures are then delivered to the Emperor, who uses them for his dark magic.

Blanca was found by a snake catcher named Xuan, a clumsy but talented young man.  He has a faithful dog named Dudou.  While getting acclimated to the village, Blanca visits the storage area where they keep the snakes, and her head starts to spin with the flood of visions.  Soon her magic comes back, too, once she goes out on expeditions with Xuan.  However, that means her memories aren’t too far behind.  With the General (Emperor’s right hand) on the way to Snake Catcher Village to find Blanca, can the two adventurers stay one step ahead of impending danger?

Eventually, the story opens up a bit and really blossoms once we get beyond the simple arc of the evil Emperor trying to kill both Xuan and Blanca in his attempt to rule the world and achieve eternal life.  As one would guess, there is a wonderful love story told here that goes beyond the human, demon, or any other deity world and is broken down to a simple thought of living for the moment.  The scenes with Xuan and Blanca together on the boat talking about nothing more than life are the most memorable.  It’s a wonderful calm before the storm of amazing action pieces.

The action is fantastic and produce many on the edge-of-the-seat moments.  But let’s not forget the fantasy sequences also sizzle, especially those with Fox, a creature who acts like a merchant for the demons.  Selfishly, I wanted more scenes with the zany world that Fox seems to be a part of, but we are left with just a taste.  These elements help to carry the film and touch up any bumps along the road.

Unfortunately, there are several bumps along the road that bear explaining.  The first is the treatment of dogs, or more importantly Dudou.  As a dog lover (and even though he’s a virtual dog), there are a couple moments of abuse that I simply didn’t care for and didn’t really advance the plot one bit.  Also of note is the odd relationship between Verta and Blanca.  They are portrayed as sisters if you read it by the book, but there is a underlying and potentially creepy element to it as well.  This is mostly evident in the beginning and end of the movie where they are sharing space, as it were.

(Feel free to tell me I’m reading too much into it if you have seen the film.)

The film is shown in a 2.39:1 widescreen format.  In this breathtaking video,  color is everywhere and in high detail.  It’s beautiful, it’s cinematic and oozing with one jaw dropping scene after another.  If somebody had told me that it was a 4k native print, I would have believed them.  In fact, I actually googled for thirty minutes hoping there was a 4k disc I could import from somewhere only to find it was a 2k Digital Intermediate.  I rarely give out 5 star scores for anything but in this case, it is wonderfully deserved.  Feel free to find me another animation film, heck another film period that has this much quality, depth and richness in its presentation.

The audio tracks are 5.1 DTS HD  in its original Mandarin and English.  The amount of praise I heaped on for the video can also be smacked right back on the audio.  Dialog is crisp and there are zero problems with either of the disc languages.  Surrounds are plentiful and can exist for any scene.  In fact, you might have to scale back your receiver’s volume so the neighbors don’t start complaining on even minimal levels.

An important thing to note was that the dialog volume didn’t suffer as action was flying around the screen.  Music is also a big part of this film and does a great job of scoring each scene without loss of the dialog or action.  (If anybody knows if there is a CD of the soundtrack, please let me know.  I already tried searching and I’m tired of looking through “Here I Go Again” and “Is This Love” if you catch my drift).  Subtitles are provided in English for the original soundtrack, English SDH and Spanish.

Trailers  6:29: Two US Trailers (one in English and one in Mandarin w/subs) and two Chinese trailers are provided.  The First Chinese trailer is the best of the lot while the second Chinese trailer should be avoided at all costs.  The main reason is because the second trailer gives away a very important plot point that should not be revealed until the moment it happens in the film.

Storyboards  4:34: Two scenes are story-boarded here to be enjoyed along with their fully animated counterparts.  Unlike traditional storyboards, there is some color provided such as red and yellow to point out certain details.

Music Video  2:53: This is “Origin” by Zhou Shen.  Subtitles are provided and it’s a very serene and powerful song.  The problem is that somebody thought it was a good idea to include sound effects from the film instead of just the song playing over the scenes.

Director Q&A – Animation is Film Festival  26:30: From the 2019 Festival that’s held in Los Angeles, we get this interview with Ji Zhao.  He talks about how he came to the business even though early on he stuck to live action as he thought he had no chance making it in animation.  He talks about the film and how the studio did get some help from Dreamworks and Pixar employees to set them on the right track.  They segue way into the inspiration from the fairy tale or TV series (I think they are referring to the one from the 90’s) and how they came up with the action sequences.  After about eleven minutes, they open it up to audience questions.  The most delightful point of the interview is when he says that the sequel is already in pre-production.

Interview w/Co-Director Ji Zhao  14:19:  Ji joins us once again.  He starts off talking about the Chinese tale and how he wanted to have a different viewpoint going into the film and center it around Xuan rather than Blanca and then place it into the past.  The idea of every character having two sides he explains in detail.  It is most obvious in the Fox character which was actually an unique creation  and not part of the original story.  The segment ends with the concept of Forbidden Love and how that played into the film.  Some of the information from the Film Festival is recycled such as talking about fantasy elements or the action sequences but it is still a worthwhile listen.

As a reward for making it to the final part of my review, I will tell you that there is a mid-credits scene with Fox at the end of the film.  It certainly sets up the second film and I look forward to seeing more of the merchant and the other characters as well.  White Snake has a lot going for it with amazing action pieces, great touches of fantasy and a really honest to goodness tender love story.  It has some issues in the technicalities as they were but hopefully these can be cleaned up in the editing for the sequel.

The disc is masterful in the video and audio department.  It is reference quality and you’ll swear you are watching a 4k disc and then be slightly disappointed when you realize that is not the case.  (Maybe in the 2nd movie they can up the resolution and gives us a 4k disc to boot).  The extras are okay and will at least provide a little more information than what you started with.  I recommend this disc, mostly for the visual spectacular but also for the intense story underneath.  Ignore some of the other crass reviews I have seen (especially those comparing it to Frozen), and take a chance on this film.  Enjoy.

Michael Durr has been reviewing movies for the better part of fifteen years now. He primarily enjoys thrillers, sci-fi, animation and even a little courtroom drama. His favorite films include Escape from New York, the Goonies and anything with Alyssa Milano. When he’s not praising Kurt Russell as the greatest actor of our time or scratching his head over a David Lynch flick, he’s spending time at home in Texas with his lovely wife, Lori and his amazing son. How they put up with him is a mystery, but even Basil Rathbone doesn’t have the time to solve that one.
Doctor Sleep (UHD Blu-ray) (4K) Gunsmoke: The Complete Eighteenth & Nineteenth Seasons