Posted in: Super Round-Up by Archive Authors on February 14th, 2020 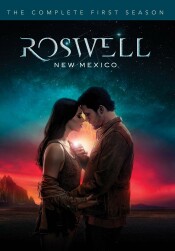 “Every small town has a story. But my hometown has a legend. Roswell was a sleepy cowboy settlement in postwar America. Full of farmers and military men, until one day something extraordinary happened, or so the legend goes.”

Roswell High was a series of 10 books written by Melinda Mentz in the young adult genre. That’s the same place where book franchises like Harry Potter and Hunger Games thrived. These books were first adapted in 1999 on the CW as Roswell. Developed by Jason Katims, the series ran for three seasons and 61 episodes. The series didn’t quite catch on in its first season, but the few fans the series did have were rather vocal. It’s somewhat ironic that a Star Trek-like campaign involving fans sending bottles of Tabasco sauce to network executives gave the series its first reprieve. That’s when Ronald Moore, a veteran of Star Trek, joined the team and brought the series into more respectable numbers. The relationship stuff was pushed to the back burner, and more of the aliens and their science fiction stories carried the series. But it also took the show more away from the books. The ratings bump just wasn’t enough to save the day, and like the original Star Trek, it lasted just three seasons.

Also like Star Trek, the series has now been rebooted. Going back to the books more than the earlier series, the series does somewhat start ten years later with a new cast playing some of the same characters. Now a Mexican version of Liz, Liz Ortecho plays the main female lead. She left a decade ago when her sister died in a horrible accident that killed two other girls, and her family has taken the blame because her sister was apparently drunk. She is returning to her hometown Roswell after being away a decade. She immediately runs into the two guys she had feelings for in her high school days. The first is Max, played by Nathan Parsons. He’s now a deputy sheriff, and he’s also an alien. He’s part of a second generation of the aliens who crashed back in 1949. He has the power to control electrical impulses, including those that control human bodies. He risks revealing himself when Liz catches a bullet from angry “villagers” who still blame her family for the tragic accident. Her father owns a diner which has become a magnet for these acts of violence. He heals Liz and of course tries to convince her she was never shot.

Max’s risk doesn’t go over well with his two “siblings”, who are also aliens with different powers. Isobel is played by Lily Cowles and has the ability to enter into minds and seek info or give pushes to some action. Maybe Liz didn’t stay 10 years ago because she was pushed to leave. Isobel thinks the relationship is dangerous. The second is Michael, played by Michael Vlamis. He has telekinetic abilities.

The other ex-boyfriend is Kyle, played by Michael Trevino. He discovers that his family was a founding family of a secret underground task force to stop the aliens. He’s being recruited to join the group and has somewhat torn feelings when he finds out what they have really been up to. A lot of the past turns out to be something other than what was believed, and an evil alien from the first generation ends up causing both worlds trouble.

The series is produced by Julie Plec, who was behind The Vampire Diaries on the same network. Expect some of the very same kinds of relationships and stories. There are even a number of staff and cast that carried over from The Vampire Diaries and/or The spin-off The Originals.

The first season ran 13 episodes, and they are all found in this collection without any extras on the set. The second season is underway, but I’m not sure what kind of staying power the show has. It tries to mix in the relationship stuff but also gets a bit bogged down by the end of the first season. It’s pretty much a reboot that does occasionally harkens back to the first series, but it’s all a little awkward, and you have to question if this was a series that demanded to be rebooted. My thoughts? “This was probably a bad idea.”

You is a show that follows in the footsteps of Dexter. Where Dexter got us into the mind of a serial killer who was trying to do the right thing while looking out for those he loved, You manages to do the same, but instead of it being about serial killing, it’s more about stalking.  This doesn’t mean that the stalking doesn’t lead to a trail of bodies left behind, but by no means is the character Joe Goldberg (Penn Badgley) in the same league as Dexter Morgan.  You is the new show from Greg Berlanti, who has been successful with his slate of superhero shows on the CW network. But You is taking a somewhat darker and mature route as it toes the line of romanticizing stalking while also delving into its worst case scenarios of how dangerous a stalker can be and them not even realizing it.

When Joe first spots Beck (Elizabeth Lail) when she comes into his bookstore, his thoughts and actions teeter between sweet and creepy, and he continues to toe this line as he continues to get to know her and eventually work his way into having a relationship with her.  By no means am I implying the show makes stalking seem like the right thing to do, but they do make Joe a very sympathetic character and at times someone we can root for, that is, until he does something pretty bad.  But what’s impressive is even when Joe is committing pretty awful acts, we can definitely understand his actions even if we don’t agree with them.

Personally one of my favorite aspects of the show is the relationship developed between Joe and Paco (Luca Padovan), a neighbor in his apartment whose mother is caught up in an abusive relationship.  As their friendship develops and Joe helps Paco in a variety of ways, this helps keep Joe grounded as a character we can root for and shows us even when he’s at his worst behavior with Beck that there is a good person in there somewhere.

The show is based upon the novel by Caroline Kepnes. While I can’t say how faithful it is to the source material, it has seemed to have resulted in a hit for Netflix, as Season 2 has already premiered on the streaming service with a third season expected in 2021. While I enjoyed the first season, even at 10 episodes this felt a bit bloated, and I’m not sure how this can go on much longer before this gets too over-the-top and just becomes too unrealistic, but I’ll be checking out Season 2 just to see what other nastiness Joe can get himself into.

Part of ABC’s TGIF block between 1992 to 1997, Hanging with Mr. Cooper starred Mark Curry as a former NBA player turned assistant high school basketball coach sharing a home with two women and a kid played by Holly Robinson Peete, Geneva Lee, and Raven Symone respectively. Season three served to solidify Lee and Symone’s role in cast after replacing series regular Robin Dumars, played by Dawn Lewis, who left the series in the first season. This was another child-acting role for Raven Symone, who you may recognize from The Cosby Show. Symone’s adorableness is on display every episode, especially in her surrogate-father scenes with Curry. She has him wrapped around her finger, which is shown perfectly when she goads him into buying candy bars.

Overall, the comedy is a bit dated, but the premises are still solid, and Curry’s performance keeps each storyline interesting. What helps the show is its family-oriented nature, which is in contrast to the show’s first season, which was more adult-theme focused. The cast is an unlikely family, but their bond is the show’s biggest accomplishment. Take episode 16 where Curry’s character fills in as the coach of Nicole’s baseball team, further showing Curry acting as a surrogate father to the girl. The final episode shows how important a figure he has become in her life.

The season, Mark has his ups and downs finding romance, which leads to some very funny moments when he discovers how controlling the girl is, as well as ending the season with a cliffhanger when Mark is presented with an opportunity to pursue a childhood dream. Of course this cause a bittersweet situation, as it has the central characters on different paths. As a result, I’m going to need Season 4 to see how things turned out. Granted the fact that there is a Season 4 gives hope; however, that doesn’t lessen my desire to see it.