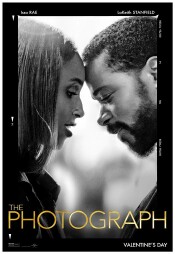 “When I saw the photo he took of me, I didn’t see myself. I saw someone who looked happier than me.”

This little romance, The Photograph, tugs at the heartstrings and should work well with a female audience. Lost love and missed opportunities set the tone for this storyline, and the complications resonate with today’s social values. The film plays out like a Saturday matinee, where a release on Lifetime would have been a better choice.  While the theater experience is the norm, the budget for the movie would have fared better had they chose a more apt venue.  The acting is very good, direction pinpoint, but the storyline is ordinary to timeworn. Michael Block (LaKeith Stanfield), a writer for The Republic, is doing a story on Christina Eames (Chante Adams), a famous photographer who had recently died, for his column.  To get some background he interviews her daughter Mae (Issa Rae), who lives in New York City. Their romance gets steamy and genuine, but Mae is cautious so she won’t get hurt. From a letter Mae finds out about her father Isaac Jefferson (Rob Morgan )who she never knew. Told with flashbacks we see young Christina and Isaac’s relationship and how she broke off with him to seek a career as a photographer in New York. When the relationship between Mae and Michael starts to run into difficulties, Mae goes to New Orleans to find her father.

The film goes on from there as Michael gets an offer he can’t refuse in Europe, leading to a disagreement with Mae. Director and writer Stella Meghie develops her characters quickly, then brings the romance to a head between Michael and Mae as their choices become much like her mother’s. She works in an amazing soundtrack that holds the film together and instills the high points of the romance of both Christina and Isaac and Michael and Mae.  When concerns are brought into the picture, the rhythm changes and becomes a mix of upbeat and sincere. Vocals are powerful and the instrumentals sensational.

Acting and soundtrack make the romantic story work. The Photograph has been rated PG-13 for sexuality and brief strong language. Be cautious when deciding to allow immature children see the film, as it does have some scenes that are inappropriate for youngsters.

John Delia has been on all sides of the movie business from publicity, writing for publications and on line blogs, script writing, to film making. Writer, critic, film editor he has worked as a film critic on this second go around for 14 years. He earned his Bachelor’s degree at the college of Journalism and Communications at the University of Florida in Gainesville, Florida. John is an active member of the Southeastern Film Critics Association (SEFCA) . Favorite Films: Lord of the Rings/Hobbit trilogies, The Godfather trilogy, the Indiana Jones trilogy (I didn't like the 4th), The Avengers and for TV it's Game of Thrones. As for animation it's a tie between anything Pixar and everything Hayao Miyazaki.
Last Christmas (Blu-ray) The Hunt for Red October: Collector’s Edition Steelbook (UHD Blu-ray) (4K)