Posted in: Disc Reviews by Jeremy Butler on February 14th, 2020 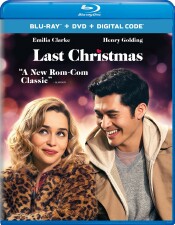 This movie truly took me by surprise; I was expecting another vapid romantic comedy tale without any original thoughts or concepts, but actress Emma Watson showed that she had something else in mind for this story that she penned herself. Based on the popular song by Wham! (yes, the exclamation point was necessary), Last Christmas follows the story of a girl who goes in the opposite direction of a new lease on life following a confrontation of her own mortality, and it takes a handsome stranger to help her see and appreciate the gift that she has been given. I know that it is not one hundred percent original, but it isn’t a premise that has been beaten to death, and there are some elements that keep it fresh. The manner in which the story unfolds is unique, and there is a twist that that took me by surprise. Not only did it take me by surprise, it utterly devastated my wife, who become a little bitter afterwards. Despite the effect the twist had on her, she couldn’t deny that this film starring Emilia Clarke and Henry Golding was very enjoyable. Writer/Actor Emma Watson also rounds out the cast as Clarke’s mother from the old country.

Kate works a dead-end job at an all-year-round Christmas-themed store in central London. She is basically homeless, bouncing from one friend’s couch to the other after wearing out her welcome wherever she lands. All the while she is chasing her dream of being an actress; however, even with this endeavor, she doesn’t fully put her heart into it. One day, she notices a handsome stranger (Henry Golding) standing outside the store looking up. When she confronts him as to what he is doing, he charms her with his unusual observations about there surroundings, causing her to chalk him up to being a random weirdo.

After being put out by the last friend she could turn to, Kate is forced to return to her parents’ home and her mother’s overbearing nature. Meanwhile, Kate continues to have run-ins with her mysterious stranger, who charms her and then suddenly disappears, causing her to look for him. Her search leads her to a soup kitchen in dire need of help. The run-ins continue, and she becomes captivated by the way he sees the city and his appreciation for the looking things, and the two grow closer. However, despite their budding romance, there is much she doesn’t know about him, and he isn’t very forthcoming. Regardless of these issues, Kate’s proximity to Tom (the stranger), begins to have a profound effect on her and her life.

There is an innocence to this story, as it circumvents a certain level of raunchiness that has become somewhat custom in romantic comedies. I suppose the reason for this becomes obvious later on in the film, but this deviation created a unique experience. My wife categorized it as sweetness. She found Golding to be charming and the perfect gentleman. Of course I’m pretty sure she has had a crush on him since Crazy Rich Asians, so her opinion comes with a certain level of bias. In regards to Clarke, this was a very different role from the Mother of Dragons role that made her famous, and the idea of seeing her in a different context will take time. However, I consider this to be a successful outing for her, though given her dream of wanting to sing and be an actress, I initially expected this idea to play a bigger role. I grasp the significance of why it didn’t later, but at first it just seemed like it got pushed to the back burner.

In regards to their collaborative performance, there is a witty banter encompassed in their budding romance. Golding is very much alive in the manner in which he takes in the city around them. His patented phrase, “Look Up” and the fact that he leaves his cell phone in the cupboard is very much in line with that philosophy. It is magnetic, and it’s no wonder that Clarke’s character feels drawn to it. When it comes to Clarke, she is the emotional arc of the story, as she is the lens in which we see her begin to live again and discover what is truly in important in life. They both play a pivotal part to accomplishing this, and it was done very sweetly and organically.

Last Christmas is presented in its original aspect ratio of 2.00:1. The 1080p image is arrived at with an AVC MPEG-4 codec at an average 30 mbps. The high-definition image presentation shines best in lights. From colored Christmas lights to street lights, the film makes excellent use of lighting, and it’s the standout feature here. Better-than-average contrast allows these lights to create the magic the film is so often implying is going on here. Clarke’s green elf costume also stands out both in its rich color and nice textures. Character close-ups are frequent in the film, and they offer pretty solid detail and near-reference skin tones. Black levels are average with lights rather than shadow definition dominating their moments.

The DTS-HD Master Audio 7.1 plays well with all of the songs that dominate the score. If you’re a George Michael or Wham fan, this soundtrack is going to be something special. If not, at least the quality is nice, and it’s not too distracting from the film itself. The surrounds aren’t terribly aggressive, nor should they be. What’s important is the Christmas atmosphere and the musical numbers including hearing Clarke sing quite often. Dialog comes through just fine, and the surrounds add more placement and condition effects than anything else.

Alternative Ending (01:53): This clip really should have made it into the film’s final cut. A majority of its runtime is taking up by the director’s introduction, so I’m really not sure why it didn’t make it. It is a sweet moment that provides a much better closing point for the film in my opinion.

Blooper Reel (14:28): This is quite a long blooper reel, but it just goes to show how much fun the cast had making this film.

Deleted/Alternative/Extended Scenes (22:43): Always one of my favorite featurettes, and here is no exception, as it shows what all didn’t make it into the final cut of the film. Must see scenes include: Kate gets kicked out, Tom has something to say, and Kate at the shelter.

Alternative Opening (01:11): I feel like this really should have been the opening to the film; it would have really showed Kate in a different light and at her lowest.

Last Christmas Full Performance (03:56): Did you enjoy seeing Emilia Clarke’s rendition of Last Christmas? Well, here it is in its entirety.

Director in Vision (01:50): A behind-the-scenes featuring montaging director’s Paul Feig vision and interactions with the cast during the filming of the movie.

It’s So Cold (01:59): This could have doubled as a blooper reel showing how the cast fared in the freezing temperatures during production.

Try Not to Laugh (06:04): This film is just loading with featurettes that could double as additional blooper reels.

A Legacy Revealed (02:43): A featurette paying homage to the song that served as the basis for the film.

Pure Golding (01:27): This is Henry Golding’s moment to shine, speaking to the suave and unconventional nature of the character. One of my favorites.

Emilia Clarke’s Recording Session (02:13): Now it’s time for Emilia Clarke’s moment in the sun, highlighting her contribution to the cast and finishing with her beautiful voice.

Last Christmas is an endearing tale that is guaranteed to tug on the heartstrings, especially when you get to that twist that I foreshadowed earlier. I mean, I had an idea where the story was going in my head, and let me tell you, I was way off. That is something that I’m not used to experiencing, and that is what made this film stand out for me.

Jeremy Butler is a film school graduate of the International Academy of Design and Technology. He is been writing for Upcomingdiscs since 2012; however, movies have played a big part of his life for much longer. Favorite genres include horror, science fiction/fantasy, and comedy. Favorite movies are V for Vendetta, Boondocks Saints, Kiss Kiss Bang Bang, and The Godfather.
Warner Brothers Archive Round-Up: Roswell, New Mexico Season 1, You Season 1, Hanging With Mr. Cooper Season 3 Photograph