Posted in: Disc Reviews by Gino Sassani on February 18th, 2020 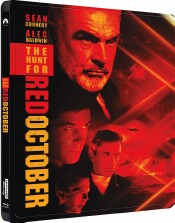 This is the film that literally started a trend. Within a decade, submarine films would make a huge comeback in the big-budget film industry. Titles like Crimson Tide, U-571, and K-19: The Widowmaker all took a little from Red October. Maybe the Cold War is over, but our fascination with that modern version of cowboys and Indians doesn’t seem to have waned much in the last nearly 20 years. While our relationship with Russia might be up and down over the last two decades, there is still a part of our culture that can’t seem to let go of that classic game of good guys and bad guys. It’s not unique to the former Soviet Union by any means. World War II has been over for more than 60 years, but the occasional Nazi bad guys still make their presence known from time to time. Maybe it’s those accents. Whatever the reason, the seemingly dated subject matter of Red October is never a liability to the film. When Red October came out, the Soviet Union had just fallen a mere two years earlier, and there were some who suggested the film was an inappropriate reminder of those recent bygone days and might even be considered a slap in the face to the new regime in Russia. Fortunately this was not one of those instances where Hollywood let its often hypocritical sense of political correctness get in the way of a great film.

Jack Ryan (Baldwin) is a CIA analyst. When he comes across a spy photograph of a new Russian submarine, the Red October, he becomes concerned about a new feature. It appears two very large doors, too big for torpedoes, have been added to the standard Typhoon class vessel. He travels to Langley and meets with his boss (Jones) to have the pictures studied. When it’s discovered that the pictures could be a “caterpillar drive”, a silent running technology, Ryan finds himself advising the President’s National Security Advisors. The ship is now out to sea, and the Russians appear to have gotten suddenly very nervous. Is the ship run by a rogue commander with glorious visions of nuking the US? Ryan thinks he wants to defect, and now he must convince an entire chain of command to give Ramius the chance to do just that. Ramius must avoid the entire Russian fleet and convince the Americans of his intentions.

Alec Baldwin was actually a bit of a newcomer at the time. He was coming off five years on television with Knott’s Landing and had just recently landed a couple of film roles. He appeared an unlikely actor to fill the shoes of Clancy’s hero. To his credit, Baldwin pulled the job off. He played a somewhat nuanced Ryan, portraying his changing confidence levels with some nice moments. Of course, Harrison Ford’s later take on the role was more up to the heroic guy I envisioned reading the original work, but Baldwin was actually better than he now gets credit for. The star of the film can’t be argued. I was skeptical at the time hearing that Sean Connery would play Ramius, the Russian sub captain. I wasn’t sure I could buy a Russian with a decidedly Welsh accent. I couldn’t have been more wrong. Connery inhabited the role completely. You’ll never doubt for a second that he is who he says he is. I think it might well be his best performance, even when you include his trademark Bond outings. There are some remarkable supporting roles to be found here as well. Sam Neill as Ramius’ second in command is a subtle but strong presence. He almost seems to not be there until an expression or a simple sentence delivers the goods. Tim Curry has a small but pivotal role as the sub’s medical officer. Again, he’s not used much, but it’s a convincing performance at every turn. Courtney B. Vance plays sonar tech Jonesy. He has the part that must have been tempting to overdo. I could see an Eddie Murphy or Will Smith in this role…really messing it up. He maintains just enough of that cocky attitude but allows us to believe there’s some real brain power under the hood. Scot Glenn plays Mancuso, the captain of the American sub, Dallas. Here it’s always what he doesn’t do that breaks the bank every time. His demeanor made me believe that he could handle himself in any conditions without breaking a sweat. Finally, you can’t ever help but love James Earl Jones.

Beyond the excellent cast and script, this is also a very well executed film. One of my favorite moments involves a clever way of avoiding a film filled with English subtitles for all of the Russian. It also saved a lot of actors, I’m sure, from having to deal with difficult dialog. The ship’s political officer is quoting from Ramius’s unauthorized Bible the story of Armageddon. As he describes the Biblical fury, the camera continues to zoom closer to his lips. As the tension mounts, his voice changes from Russian to English, and as if by divine intervention, we are now granted the ability to hear these men speak in a language we can understand. This was absolutely brilliant. The cinematography also handled the cramped quarters of these subs about as well as I’ve seen. You know which sub you’re on instantly by the lighting. The Red October is showered in an appropriate red light. The Dallas is flooded with much more natural lighting, perhaps tinted toward the yellow part of the spectrum. It’s subtle, but you pick up on it almost instantly.

Hunt For Red October is presented in its original aspect ratio of 2.39:1. The ultra-high-definition 2160p  image is arrived at by an HEVC codec with an varying average bitrate. The upgrade is impressive. In October the underwater photography can be murky and often unclear. That bump in resolution makes a significant difference. The rear-projection stuff suffers a little from the better detail. The film retains the grain that keeps the presentations organic. I’m very happy to see that Paramount has learned its lessons about DNR. The HDR handles the contrast expertly with wonderfully deep blacks and nice shadow definition. The black uniforms of the Russian sailors is wonderfully textured, and a big bump from the earlier Blu-ray.

Unfortunately, there is no upgrade of the audio on the film. You get the exact audio from the Blu-ray releases with no edge in bit-rate.

The extras are all ported over from the Blu-ray release. No new extras.

It took an end to the Cold War to bring out one of the best Cold War films to be made. Perhaps better relations with Russia created an environment where both sides could be played so well. There are villains and good guys on both sides of the Iron Curtain here. A refreshing respite from the white hat/black hat films that more frequently dominate the genre. If you are watching this film for the first time, it is important to try to avoid comparisons between Alec Baldwin, Harrison Ford, and now Ben Affleck. The characters share the same name and job, but they are three totally different characters in four totally different films. Baldwin plays a more reluctant hero, while Ford is … well he’s a “Buckaroo”.

Gino Sassani is a member of the Southeastern Film Critic's Association (SEFCA). He is a film and television critic based in Tampa, Florida. He's also the Senior Editor here at Upcomingdiscs. Gino started reviewing films in the early 1990's as a segment of his local television show Focus. He's an award-winning recording artist for Omega Records. Gino is currently working on his 8th album Merchants & Mercenaries. Gino took over Upcomingdiscs Dec 1, 2008. He works out of a home theater he calls The Reel World. Favorite films: The Godfather, The Godfather Part II, The Body Snatcher (Val Lewton film with Karloff and Lugosi, not the pod people film), Unforgiven, Gladiator, The Lion King, Jaws, Son Of Frankenstein, The Good, The Bad And The Ugly, and Monsters, Inc.
Photograph A Beautiful Day In The Neighborhood (UHD Blu-ray) (4K)