Posted in: The Reel World by Gino Sassani on February 22nd, 2020 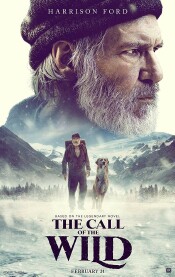 Jack London’s 1903 novel The Call Of The Wild has become a great American classic that hasn’t been out of print ever in over 100 years. There have currently been over 1000 editions in every major language of the world. One of the aspects of its endurance is that it has such wild appeal. I read the book first when I was around 10 years old, and the imagery has remained throughout my entire life. I still consider it one of the best novels I have ever read. The novel also has great appeal among older readers because of the story’s engaging adventure elements, and, of course, the story is about a dog. London managed to bring the canine character alive with wonderfully visceral accounts of the dog, Buck’s life of adventure that includes both tragedy and triumph. The story has been to the screen both large and small several times to date including a classic 1935 film staring Hollywood legend Clark Gable. Every generation before and since (there was an earlier 1923 version) has witnessed at least one new version of the film. The most recent was a 2009 3D release that made it a kid film with Christopher Lloyd and Timothy Bottoms. Now The Call Of The Wild returns to the big screen as the first Disney release under the newly acquired Fox purchase to sport the entity’s new name, which drops the Fox name and is now merely 20th Century Studios. It’s somewhat the perfect film to bridge the old Fox with Disney, as this is very much a family film.

Buck is a family dog from a Southern plantation run by Judge Miller, played by West Wing star Bradley Whitford. Buck has a pretty good life but manages to get himself in a little trouble when he takes down the Thanksgiving feast that included multiple turkeys. That earns him a night outside instead of snuggling with a family member inside the mansion. It was an unfortunate time to leave the family pet outside for an evening. A gold rush in the Yukon area of the Canadian frontier creates a shortage of sled dogs, leading to huge prices paid for them. Buck is kidnapped and transported from his comfortable Southern life to the frigid wasteland of the Yukon Territory. Unfortunately for Buck, he learns that there are cruel people in the world who force him to submit from the body of a club. Along the way he helps an old man who dropped a harmonica and is treated, if for a moment, kindly again. Buck ends up with a couple who run a postal route and count on the dog sled team to get the mail out on time. But Buck has to learn that even among dogs there is cruelty, as the Siberian husky asserts his dominance over Buck and the rest of the pack. Buck fights against the leader and ends up becoming a new, more benevolent leader of the pack, and he soon adapts to the life of a postal sled dog. That is until the route is cancelled and Buck finds himself once again having to adjust to a new master, this time another who rules by the club. But loner John Thornton, played by Harrison Ford, is the harmonica man, and he remembers Buck and rescues him from the abuse, and the two bond as they follow an old map to a legendary gold claim where the settle into a wonderful summer of companionship. But Buck soon learns he requires a kind of companionship that Thornton can’t provide. And Thornton certainly understands why Buck is spending more and more time away from the cabin. He’s met a wolf pack and a beautiful white female wolf who can fulfill Buck’s newly discovered needs.

It’s been a while since I’ve read the book. The film has certainly inspired me to revisit the original story. While the concept is pretty much taken from the themes and elements from the novel, this version of the story eliminates the worst of the darker elements of the story and substitutes a more child-friendly, antic-filled story. All of this is more accented by the fact that Buck and all of the dogs and wolves of the film are computer-generated. Buck is also less of a sled dog, looking more like a Saint Bernard mix. I have to say I’m partial to the more traditional Siberian husky version that has been a part of almost all of the earlier versions on film or television. I’ll admit to some bias here, as I’ve loved huskies since I was that 10-year-old who first encountered Buck in the novel. I happen to have a husky named Aurora and was likely the only member of the audience who was rooting for the husky. The computer-generated idea had both good and bad effect on the film. In close-ups, the emotion in Buck’s eyes is incredibly compelling. Watching Buck have to learn to submit to cruelty was far more moving than I was expecting. But the wider shots of Buck often betray a bit of a cartoony performance that won’t be distracting to the children but will be for some adults. I count myself in the distracted group. The film might have been better if a CG Buck were used for those facial close-ups and a real dog for the wide shots. Then again, I still think a husky would have been better. So your mileage might vary.

I have to give credit to Harrison Ford here, who develops surprisingly magical chemistry with a dog that isn’t there. That had to have been hard to pull off, but Ford makes it look so easy. And he’s quite a standout from most of the actors who didn’t really pull that off. When Ford begins to share screen time with Buck, he sells it in a way that no one else could. Ford isn’t pretending. He believes Buck is there, and the sheer force of that belief sells it completely. It’s the only part of the film where Buck takes on such a complete transition into some kind of shared reality.

The Call Of The Wild is a timeless story. I’ve seen better versions, with the Gable film still a classic telling of the story. This version should be a wonderful family experience, and I hope it endures. There just isn’t that many family adventures on our cinema screens these days. They are either animated features or toilet-humor fests and too often these days, both. You can bring the entire family, and everyone will get something out of the time. Ignore the crazy guy outside the theatre with the “unfair to Siberian huskies” sign. “You never know.”

Gino Sassani is a member of the Southeastern Film Critic's Association (SEFCA). He is a film and television critic based in Tampa, Florida. He's also the Senior Editor here at Upcomingdiscs. Gino started reviewing films in the early 1990's as a segment of his local television show Focus. He's an award-winning recording artist for Omega Records. Gino is currently working on his 8th album Merchants & Mercenaries. Gino took over Upcomingdiscs Dec 1, 2008. He works out of a home theater he calls The Reel World. Favorite films: The Godfather, The Godfather Part II, The Body Snatcher (Val Lewton film with Karloff and Lugosi, not the pod people film), Unforgiven, Gladiator, The Lion King, Jaws, Son Of Frankenstein, The Good, The Bad And The Ugly, and Monsters, Inc.
Shutter Island: 10th Anniversary Steelbook (UHD Blu-ray) (4K) Snatchers (Blu-ray)