Posted in: Disc Reviews by Brent Lorentson on February 25th, 2020 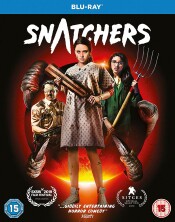 You can argue that the teen slasher genre is mostly a cautionary tale about premarital sex and using drugs and alcohol. After all, a majority of the time the “final” girl was typically the “good girl”.  In a lot of ways, the horror genre is basically a cautionary tale for the viewers, though many of us fans of the genre seem to take delight in seeing the bad decisions people make and the consequences that follow.  Teeth and It Follows are a pair of my favorite cautionary-tale horror films that deal with sex and the consequences in a fun and unique way. Snatchers I was hoping would follow and be a welcome addition to these modern cult favorites, but for me, it didn’t quite stick the landing. Sara (Mary Nepi) is doing what she can to keep up with her popular friends in high school, which means she’s willing to do what she can to hold onto her jock boyfriend, Skyler (Austin Fryberger), even if it means losing her virginity with him. Unfortunately the consequences arrive swiftly as she discovers she is pregnant.  Things only get worse when two days later Sara wakes up with a bulging pregnant belly and no one to turn to. Feeling as though she has no other option and no one to talk to, she reaches out to her former best friend, Haley (Gabrielle Elyse). The chemistry between Nepi and Elyse is a big factor as to why this film works, and this chemistry is what will keep many viewers engaged when normally they would have given up on the film.

I like campy, and I enjoy a bit of gore in my horror, so it’s no surprise that Snatchers was able to hold my interest.  When Sara goes to have her pregnancy terminated and what follows is one of the more over-the-top alien reveals, I found myself hooked into this film.  This subtle injection of social/moral commentary, whether intentional or not, does give the film a little more depth than expected, but unfortunately for me this is where the film peaks.  Where it becomes more frustrating is when it makes the attempt to make sense of all that is happening.  Is Skyler an alien? What happened on his trip to Mexico?  These are questions that are certainly warranted, but rather than give us a detailed account, it simply would have sufficed that less of an answer would have been more.  By the time the girls attempt to get answers, we’ve already seen the alien cause havoc in two locations, and when they do finally get answers, if anything it stalls the momentum the film has had building.

As for the creature effects, I really dug the creature design and how when we see it a majority of it is through practical effects.  The gore is fun and over-the-top, though it seems to peak as well midway through the film, so if you’re going into this hoping for a final showdown to be filled with gore, ehhh, not so much, but at least it’s fun.  Basically that’s what the film is, FUN, and that’s a good thing.  At times the humor seems a little forced, but I still appreciate the effort, especially when it seems that lately horror films have forgotten they can be fun and silly.

Snatchers is presented in the aspect ratio 2.39:1.  The 1080p image is arrived at with an AVC MPEG-4 codec at an average of 17 mbps.  When it comes to the transfer of the film, there didn’t appear to be any compression issues, but the film does lack a bit when it comes to detail.  The skin tones are a bit light; the overall film is a bit over-lit, which is typical more with comedies, but it removes a lot of tonal atmosphere.  Because it’s a low-budget horror film, a lot can be forgiven with the look, but if this were a more serious film, I’d be more critical of the over-lit, clean look.

The DTS HD-Master Audio 5.1 track is just about what you’d expect from a campy monster film on a budget.  More emphasis is placed on the impacts and the gross effects.  When it comes to ambient sounds, this isn’t a film that really immerses you with a great sound mix.  The dialog is clean and clear, but really, this one is simply a glorified 2.0 mix, but that’s fine considering the film relies more on the sight gags.

(Commentary with Writers and Directors) Maybe the guys haven’t heard a commentary before, but this one was a bit frustrating to sit through.  Between them paying more attention to jokes only they seem to understand and not discussing the film, or attempting voices of other crew members while talking about certain scenes, this is a track that gets a hard pass from me, I had to turn it off midway through.

The Birth of Snatchers: A Behind the Scenes Look: (14:21) A nice little feature that takes us behind the scenes on how they shot some of the film’s stunts and how they pulled off several of the practical effects.

While I wouldn’t say Snatchers is the next cult classic, the film is still a good time.  If you like your gore with a sense of humor, then this is one I feel you’ll have a good time with.  Who knows; maybe down the line we’ll get a sequel with a bigger budget behind it, and it can reach its full potential.

Brent Lorentson is a horror writer and film critic based out of Tampa, Florida. With a BA in Digital Film, he co-wrote and co-directed Scavenger Hunt. His short stories have appeared in various horror anthologies. In 2019 his short script Fertile Blood will be a part of the anthology horror film Slumber Party. He is currently working on his first novel A Dark and Secret Place set to be released in late 2019. Favorite Films: Taxi Driver, Fight Club, I Saw the Devil, The Wild Bunch, Dawn of the Dead, A Clockwork Orange, Pulp Fiction, Heathers, The Monster Squad, and High Fidelity.
The Call of The Wild (2020) Ford v Ferrari (UHD Blu-ray) (4K)