Posted in: Disc Reviews by Gino Sassani on February 21st, 2020 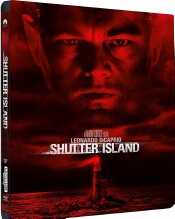 “This is a mental institution, Marshal. For the criminally insane. Usual isn’t a big part of our day.”

When I first saw Shutter Island ten years ago, I thought it was a good movie. I didn’t think it was a great movie. Like many Martin Scorsese fans out there, I have developed certain expectations from his films. It isn’t at all fair, but as I’ve said here many times, expectations are killers. I bathed too often in Scorsese’s modern mob mythology that I think it took seeing The Irishman and being royally disappointed and then getting to see Shutter Island again thanks to this wonderful new steelbook 10th anniversary release on UHD Blu-ray in 4K. I also never thought Shutter Island could ever improve with age. It’s got a wicked twist that occupies the final 40 minutes of the film, and no matter how good the performances might be, how could it possibly get better when you know what’s coming? But again, I recall it being a good movie, so I welcomed the opportunity to revisit it after 10 years in 4K. Why not, right? I’m glad I did, and no matter how good you thought it was the first time, it’s better the second time through. And I was absolutely wrong in my first evaluation. Shutter Island is not a good movie at all. It actually is a great film, and it’s a shame that it’s been relatively overlooked among Scorsese’s films. And spoiler alert!!!!!!! The twist is even better when you know it’s coming. (You thought I was going to spill some beans?)

Teddy Daniels (DiCaprio) and Chuck Aule (Ruffalo) show up on Shutter Island off the coast near Boston where the worst of the country’s mental patients are kept in an Alcatraz-like mentality of keeping society safe. Terry is using a missing patient case as an excuse to get to another person he believes is committed there. He believes this “extra” patient is there off the books and was responsible for setting a fire that killed his wife and three children. The investigation continuously takes him down paths he doesn’t really want to tread. With each revelation things get more and more complicated, to the point where truth becomes merely a point of view.

The film is populated with so many incredible performances that it’s almost not even fair. This might well be Leonardo DiCaprio’s best performance. He has instant chemistry with Mark Ruffalo, and this chemistry keeps the thriller humming along until the big shoe finally drops. You find yourself wanting to hang out with these guys more, and you miss that teamwork when they aren’t together. Sir Ben Kingsley is also excellent as Dr. Crawly, who is the head doctor at the facility. Strangely enough, he fits into that trilogy of characters even though there are different stories going on that lead to one of the most compelling 40 minutes of cinema in the last decade or so. They command your attention, and I’m not sure I could blink for that last act. Of course, most people know the ending, and that’s why you might think it just won’t work for repeated viewings, and that’s where you are wrong and I was wrong. I found it more captivating this second time through than I did the first time 10 years ago. Why? It’s these performances. It’s Scorsese’s ability to frame a scene just so perfectly. It’s watching DeNiro in the phone booth learning that his best friend just got whacked just when he was supposed to be celebrating the best day of his life. It’s that long shot outside the phone booth, except this one lasts long enough to completely savor. The cinematography is awesome. The beats are perfect. It’s as close to a perfect final act you’ll ever see… or saw.

Silence Of The Lambs and Monk star Ted Levine doesn’t have a huge role, but just a couple of scenes is all it takes. He delivers a monolog in a Jeep that reveals soul and emotion and sets you up for what’s really coming. Then there’s Max von Sydow, who delivers his best performance since The Exorcist. There are so many other roles that just add up to extended cameos, really, but deliver powerful emotional beats from the likes of Jackie Earle Haley, Patricia Clarkson, and a short scene with Elias Koteas that’s ripped straight out of a Hammer Frankenstein film.

The 1950’s setting is achieved perfectly through a somewhat film-noir atmosphere of shadows and interesting source lighting which includes a beautiful act out in a hurricane-like storm. Scorsese brings all of these elements together and does what too many directors can’t or simply won’t do. He sits back and lets the masters be the masters both behind and in front of the camera. The labyrinth-like catacombs of the highest security building do a great job of presenting the state of mental health facilities in that time period, and it’s like something out of a medieval castle dungeon.

Shutter Island is presented in a close to original aspect ratio of 2.35:1. The ultra-high-definition 2160p  image is arrived at by an HEVC codec with an impressive average bitrate of 65-70 mbps. This film is rich in atmosphere, and for the first time all of that finally shows up in a home entertainment release. Black levels are rich and deep, allowing for that film-noir style of cleanly defined blacks and isolated elements of light. The storm scenes are a very sweet example of what I’m talking about. Colors are greatly desaturated as part of the intended style with an occasional splash of color usually in the staff areas of the facility where color and texture is allowed to spill over into an almost monochromatic canvas. The period costumes also deliver nice textures, particularly the jackets and fedoras. The attention to detail has always been one of this movie’s strengths, and now there’s finally the resolution and bandwidth to truly appreciate such carefully created detail and atmosphere. The flashbacks to the WWII concentration camp are bone-chilling to the core. The detail here tempts you to look away, all the while demanding that you do not. Much of the grain is retained, so there’s not a lot of DNR nonsense going on here. You will get a completely filmic experience. Some of the material was even shot on 70mm film, and that’s just the cherry on top.

The audio presentation is not an upgrade. You get the same Blu-ray DTS-HD MA 5.1 track.

The extras are a bit of a disappointment here. The Blu-ray is identical to the first release and has the two behind-the-scenes features from that release. I’m of the belief that you shouldn’t call attention to an anniversary edition without giving us something new.

I’m not going to lie. I am disappointed that the audio and extras revert to the previous Blu-ray with nothing new to sink my teeth into. But it’s still well worth the purchase to see this film the way it was created to be seen. The only way you’ll get a better look is if a restored copy makes its way back to the cinemas. For now, any chance to see what Scorsese wanted you to see starts with this release. “Fifty years from now, people will look back and say, ‘Here, at this place, is where it all began.'”

Gino Sassani is a member of the Southeastern Film Critic's Association (SEFCA). He is a film and television critic based in Tampa, Florida. He's also the Senior Editor here at Upcomingdiscs. Gino started reviewing films in the early 1990's as a segment of his local television show Focus. He's an award-winning recording artist for Omega Records. Gino is currently working on his 8th album Merchants & Mercenaries. Gino took over Upcomingdiscs Dec 1, 2008. He works out of a home theater he calls The Reel World. Favorite films: The Godfather, The Godfather Part II, The Body Snatcher (Val Lewton film with Karloff and Lugosi, not the pod people film), Unforgiven, Gladiator, The Lion King, Jaws, Son Of Frankenstein, The Good, The Bad And The Ugly, and Monsters, Inc.
21 Bridges (Blu-ray) The Call of The Wild (2020)