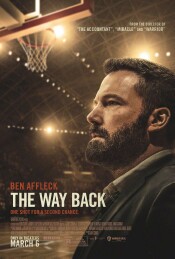 Taking it to the net, Ben Affleck gives his all for the camera as a man who has hit bottom.  It’s a performance that brings out the serious side of a character, and not anything like his superhero turns in the barrel. But it’s what the doctor ordered, as its classic Affleck and a joy to watch.  If you want to see a comeback to cheer for, it’s Ben Affleck in The Way Back. Down in the dumps for initial reasons unknown except that his wife has left him in a trial separation, ex high school basketball great Jack Cunningham (Ben Affleck) needs something to lift him out of a death spiral induced by alcohol abuse. It comes with an offer from his old high school that had a coach who crapped out in the middle of a losing season.  Taking over the team after some pressure from the padre of the parochial school, he starts to wonder what he got himself into.  With the help of his assistant coach, Dan (Al Madrigal) and the padre on the bench, he tries to keep from cursing at the refs and drinking on the job. It’s those supporters and the desire to bounce back that are the catalyst that draws the man out of the mouse he had become.

Director and co-writer Gavin O’Connor (Warrior) takes a chance on Affleck’s performance to give him another winner, and he succeeds. Making things look authentic and guiding his support characters around Affleck’s role, he brings a lot of excitement and pathos to the film.  It’s a gamble that pays off in many ways, for the film and the actor who needed a comeback chance. It also doesn’t hurt that some of the actors who play the high school basketballers make things look real by putting some good moves on their opponents in the games.

Janina Gavankar as his wife Angela finds herself at a loss as Jack keeps distancing himself from her and his mother. Trying to draw him back into his family, she finds the going tough.  As his assistant coach Dan, Al Madrigal tries to keep Jack in check and not lose control while coaching courtside as they keep winning games.  When Jack gets out of hand, Dan has to make a tough choice that will awaken Jack like never before.

Ben Affleck worked on the film right after coming out of rehab, and it looks like he used that to create his character.  It may have been part of his recovery, but much like Joaquin Phoenix, rising back up takes a lot of guts, especially when it comes to putting yourself in front of a public that will be your judge and jury.

The Way Back has been rated R by the MPAA for language throughout, including some sexual references. A nice comeback for the filmmaker, audiences, and an Icon.

John Delia has been on all sides of the movie business from publicity, writing for publications and on line blogs, script writing, to film making. Writer, critic, film editor he has worked as a film critic on this second go around for 14 years. He earned his Bachelor’s degree at the college of Journalism and Communications at the University of Florida in Gainesville, Florida. John is an active member of the Southeastern Film Critics Association (SEFCA) . Favorite Films: Lord of the Rings/Hobbit trilogies, The Godfather trilogy, the Indiana Jones trilogy (I didn't like the 4th), The Avengers and for TV it's Game of Thrones. As for animation it's a tie between anything Pixar and everything Hayao Miyazaki.
Dark Waters (Blu-ray) Titans: The Complete Second Season (Blu-ray)