Posted in: Disc Reviews by Brent Lorentson on March 11th, 2020 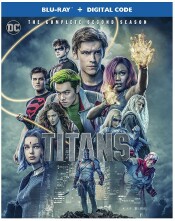 Warner Brothers has done an impressive job when it comes to their live action DC Universe television shows.  Everything including Arrow, The Flash, and Legends of Tomorrow have been fun entertaining experiences. Now with them starting up their own streaming service, they have upped the ante by releasing Titans.  When I first heard about this one, I wasn’t sure what to think considering I wasn’t much of a fan of the animated series, but I’m so glad I came into this show with an open mind, because this show is jam-packed with coolness.  Since this was made for a streaming service and not broadcast television, not only do we get superheroes dropping F-bombs, but we get some edgier storytelling along with some violent action you may not expect.  Seriously, this one is not for the kids.  Season 2 picks up right where Season 1 left us hanging as we see the Titans coming together to save Rachel (Teagan Croft) from her father, Trigon, as he’s about to destroy the world. You know; typical bad guy behavior. What’s a little disappointing is how easily this villain is taken out, but of course it doesn’t take long before a new villain to be introduced.  For those who are familiar with the DC comics and for those who are fans of Arrow, the big bad is a familiar masked villain as Deathstroke is brought into the show.  Considering the number of characters in the DC rogues gallery, it is a bit annoying how we are given a character that we’ve seen before, but thankfully this live-action version is different enough from the Arrow-verse version that the storyline feels somewhat fresh.

This season not only does it head west to make San Francisco the team headquarters, Season 2 also takes place over two separate timelines, one being present day as they facing Deathstroke for the second time, while the other timeline takes us five years into the past where we see the original Titans in their prime when they first confronted Deathstroke.  Seeing the dynamic of the old and new Titans is certainly one of the season’s high points. It’s not just about seeing a bunch of superheroes together, but seeing their chemistry as well as their feuds offers up plenty of drama.  At times the drama is absurd and is like watching a superhero version of The Real World.

Dick Grayson (Brenton Thwaites) continues to take strides in shedding his Robin image and is making moves to take on a new moniker. Considering how previously in Season 1 Grayson was all about distancing himself from Batman, a good portion of this season has him dealing with his relationship with Bruce Wayne (Iain Glem).  This portrayal of Wayne is certainly a different one from what we’ve seen before, and that isn’t necessarily a good thing.  What’s nice is getting to see the side that Grayson saw and how he perceives the man beneath the cowl.  Sure, this only gives us the domestic side of their relationship and how they squabbled, and because of this it’s obvious why Grayson felt the need to leave Gotham behind, but it also left me wondering how this older version of Batman could continue to successfully fight crime while also having me wanting to see him training Jason Todd, the new Robin (Curran Walters).

Kory Anders, aka Starfire (Anna Diop) decides to stay on Earth rather than return to her home planet despite having family issues of her own.  Stepping up this season is Gar Logan, aka Beast Boy (Ryan Potter) as he seems to be struggling to find his place with the team while also playing the peacekeeper.  Along with Donna Troy, Hawk, and Dove, the team gains some new additions in the form of Conner aka Superboy (Joshua Orpin) and his canine companion Krypto.

Episode 6: Conner is without a doubt my favorite episode from the series as it pretty much is all about Conner and him learning about who and what he is.  Sure, we saw this storyline before in previous TV shows, BUT this episode delivers so much fun and geeky awesomeness it has me excited for what can potentially come in future seasons.  As for Krypto, it’s about time this wonder-mutt has his time to shine.  Episode 6 isn’t the only good one; in fact, this was a pretty great season. Atonement was a great episode as well as Jericho, but sadly in this 13-episode season there is a pair of duds.

I know not every episode can be great, but season premieres and finales tend to lead fans to have high expectations. For this season both the premiere and finale fell flat for the same reason: so much going on with too simple a resolution.  I won’t spoil anything, but considering the pacing of this season and for the buildup of an array of confrontations and storylines, everything basically gets resolved in one long sequence; to say anti-climatic just doesn’t cover it.  Thankfully there is plenty of story to launch these characters into a third season where it looks as though the Titan universe is only going to expand.

Titans is presented in the aspect ratio 2.40:1.  The 1080p image is arrived at with an AVC MPEG-4 codec at and averages from 18-32mbps.  The show has kind of a washed-out, dirty look to it that fits the aesthetic they are going for.  Considering the show takes place from San Francisco to Chicago, and “Metropolis”, we are not given nice pristine vistas, but instead we get a lot of smog-filled skylines and dark and grimy alleyways.  We get enough light and color separation where we can see what is going on in the fight scenes, but when the CGI effects are added, they seem to be more obvious.  Explosions and fire sequences are where this suffers the most, but really, there were no compression issues that I could see.  Skin tones seem a bit lighter, but considering these are vigilantes doing their dirty work at night, this could easily be ignored.

The DTS HD-Master Audio 5.1 track kicks in nicely when the shows theme kicks in. A lot of bass, and it just helps set the tone.  The fight scenes sound great, everything from gunfire to objects passing through the air to simple impacts help with the immersion here.  The dialog is crisp throughout.  For a television show, this is a really nice mix.

Jason Todd: Fate By Fans: (11:52)  Back in 1988 DC asked fans to vote on the fate of Jason Todd, and last year the show gave fans the same opportunity to vote on the character’s fate.  This is a fun little segment about what drove the comic book writers to do this as well as why they did it for the show.

Despite my thoughts on the first and last episodes, everything in the middle is so entertaining that this is quickly becoming one of my favorite superhero shows.  If you liked the first season, Season 2 simply expands on the world and gives us more characters to root for.  There are plenty of surprises in this season to keep fans excited.

Brent Lorentson is a horror writer and film critic based out of Tampa, Florida. With a BA in Digital Film, he co-wrote and co-directed Scavenger Hunt. His short stories have appeared in various horror anthologies. In 2019 his short script Fertile Blood will be a part of the anthology horror film Slumber Party. He is currently working on his first novel A Dark and Secret Place set to be released in late 2019. Favorite Films: Taxi Driver, Fight Club, I Saw the Devil, The Wild Bunch, Dawn of the Dead, A Clockwork Orange, Pulp Fiction, Heathers, The Monster Squad, and High Fidelity.
The Way Back The Affair: The Complete Series