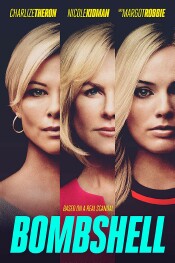 Bombshell is a dramatization of the real-life scandal that occurred at broadcast news giant Fox News in 2016, where multiple women came forward to report incidents of sexual harassment, many of which involving the chairman and CEO of the company, Roger Ailes. This is an event that I’m sure everyone had some awareness of back then, and if you didn’t, you know about the events involving Weinstein. In regards to this film, it is told from the prospective of three women who were employed at Fox News: Megyn Kelly, played by Charlize Theron, Gretchen Carlson, played by Nicole Kidman, and Kayla Pospisil, played by Margot Robbie. Unlike Theron’s and Kidman’s characters, Robbie’s character is actually a composite character based on accounts of multiple women. In addition to these talented women, this film has someone recognizable names that it would take me the length of this entire review for me to record them all, but I will give you a few of the most prominent cast members: John Lithgow, who portrayed Ailes, Malcolm McDowell as Rupert Murdoch, and Kate McKinnon, who played a friend and confidant to Robbie’s character. The list literally does go on and on. I can honestly say that I did not expect to see so many recognizable faces, but I suppose that speaks to the cultural relevance of this movie, as it tackles the idea of sexual harassment in the workplace and the pressures that victims find themselves under, as well as the potential ramifications of reporting it, no matter how tragic it may be that they face such consequences in the first place.

One of the things I really liked about this movie is the multiple layers, as it displays three women, all of whom face this issue and struggle to figure out how to handle the situation and how to cope afterwards. Theron’s character finds herself between a rock and a hard place. Despite having to ward off Ailes’ advances early in her career, she has managed to thrive at the network, and when the allegations come to light, she’s put under immense pressure by the network to defend the chairman. All of this coming not long after another public battle with the then presidential candidate Donald Trump. After barely surviving that very public ordeal where she found her private life brought into the public view, she wants nothing more than to stay out of the matter. Theron does a good job of humanizing Kelly, despite her initial inaction, and actually becomes the character who propels the story as she goes on her own search for the truth.

Robbie’s character is the roughest perspective, as the harassment is ongoing. As a bright-eyed new employee of the network, she wants nothing more than to advance within the company. Her scenes with Ailes, where he alludes to her idea of proving her loyalty (which according to my research was a euphemism for sexual acts), brought intensity to the film. Not to mention, her phone conversation with McKinnon was the emotional heart of the film, as she recounts his words. However, it was her exchange with Theron’s character that was Robbie’s best work of the film, as she confronted veteran about her silence regarding her own experience. I agree that pointing the finger and blaming the victim can be distasteful, but it address an issue regarding the price of silence.

Then there is Kidman’s portrayal, which I found to be the best of the three. Despite the knowledge that she would ultimately be demonized in the media, as well as harassed by normal citizens, she waged war with the titan of industry and held her own. This was real-life chess if I’ve ever seen it. More than one character alluded to the fact that Kidman’s Carlson did her homework, and all of this paid off as she very clearly gains the upper hand. This victory is ultimately bittersweet, however, as I hoped for a more satisfactory death blow. Yes, she won, but when all the power was in her hands and he was at her mercy, she took what was a lesser victory in my opinion. I’m not judging her decisions, and I’m sure this was likely done this way for historical posterity, but I would have enjoyed seeing Lithgow’s character get his just desserts.

Speaking of Lithgow, he was utterly convincing in this dramatization. His character was utterly unlikeable, especially in the manner in which he attempted to preserve his reputation. This was a story that literally sucked me in. From the polar opinions that came out of it, creating a hostile work environment to the inner monolog that the characters had during uncomfortable situations. This is an issue that is very relevant in today’s society and the manner in which the story unfolded was very realistic, albeit crude in some areas. That said, this is an ugly issue that is very crude in itself.

Bombshell is just that, a bombshell, as it tells the story of one of the biggest accounts of sexual harassment in history. It champions an issue that should be brought to light, and it was represented by some of the greatest talents of the acting industry. Recognizing that events did not unfold exactly in this manner, it remains credible and easily plausible. A worthwhile film that I expect will further the cause.

Jeremy Butler is a film school graduate of the International Academy of Design and Technology. He is been writing for Upcomingdiscs since 2012; however, movies have played a big part of his life for much longer. Favorite genres include horror, science fiction/fantasy, and comedy. Favorite movies are V for Vendetta, Boondocks Saints, Kiss Kiss Bang Bang, and The Godfather.
A Quiet Place (UHD Blu-ray) (4K) (Steelbook) Richard Jewell (Blu-ray)