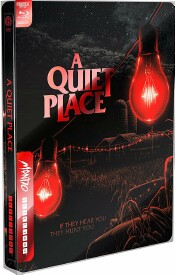 As I write this there’s a truly “Zombie Apocalypse” attitude going on around the world. With the launch of A Quiet Place II delayed because of health panic this might just be the time to “quarantine” yourself in your home theatre and watch the film again on UHD Blu-ray in 4K. There’s nothing different about this release except for the steelbook format and different cover art. The discs provided are exactly the same discs you already have if you own the previous 4K release. It makes a nice collector’s item as you wait for the eventual follow-up, which I hope will be very soon. You might call me jaded, but I am pretty disappointed by the state of horror movies. It’s not just the last few years. The truth is I haven’t seen 10 really good horror movies in over a decade. Now that I’ve had a chance to see A Quiet Place, that number isn’t going up. A Quiet Place is not a really good horror movie. It ends up making a lot of the same mistakes that filmmakers think define a horror film in the modern age. It relies too heavily on jump scares and characters who do some of the most idiotic things, thus placing them in a somewhat self-created dangerous situation. But I will make the argument that A Quiet Place is still a pretty good horror film because of a rather clever and unique concept and a filming process that allows us care for these characters more than the usual horror film red-shirt fodder that too often leaves me rooting for the monster in a Darwin-like weed-out-the-gene-pool kind of way.

The film takes place in a near-future that newspapers place at about 2020. It’s now day 86.  We are now in the familiar post-apocalyptic world of deserted streets and a family of characters scrounging through the derelict buildings for scraps on which to survive. The difference here is that this family, a husband and wife with three young kids, are going out of their way to remain as completely silent as possible. They communicate strictly through sign language and walk on bare feet to avoid the sounds of footsteps. Each move is carefully calculated to avoid even the careless sound of placing a pill container on a counter. Silence is golden, and before the title card is revealed, we discover the reason for all of this care. The Earth has been invaded by creatures that are blind but with heightened hearing ability. They hunt strictly by sound and move at lightning speed toward any sound and attack with razor-like appendages. These attacks are over in a second, and the viewer is left with graphic evidence that in this future world, silence isn’t golden; it’s survival.

A Quiet Place is presented in an aspect ratio of 2.40:1. The ultra-high-definition 2160p  image is arrived at by an HEVC codec with an average bitrate of 65 mbps. The ultra-high-definition gets most of its bump from textures in the details. This is a very textured world, and the UHD release is far more accurate in those fine details. Colors are particularly bright in this desaturated world. The black levels are quite rich and offer multiple layers of fine shadow definition. Contrast allows the film to exist in the darkness with nice bright elements that stand out considerably because of the HDR. The fireworks are a nice example, as is fire. The release has a bit of a grain element that makes the film so much more organic.

The Dolby Atmos defaults to a nice 7.1 mix.  This is a very quiet film, as the name suggests. I talked about how that brought us a more intimate and meaningful encounter with these characters. It also makes sound far more important than it would be in a normal film. When there is sound, it stands out and offers a wonderfully immersive environment. You hear things in this mix that you don’t really pay attention to in most films. Now the wind blowing through the trees or a slight creak in a door attract your attention. Water movement is very nicely delivered. The abundant silent nature of this film is unique, and the sound design shows a tremendous attention to the little details that make this one of the better audio presentations yet in 4K.

Creating The Quiet – Behind The Scenes of A Quiet Place: (14:45) This is your typical behind-the-scenes feature with the expected participation of the cast and crew. The writers tell us about the genesis of the idea going back to their college days. We get a nice look at the location and sets for the movie. I wasn’t aware that the deaf character was indeed played by a deaf actress, who gives her own very unique insights to the film and the shooting process.

The Sound Of Darkness – Editing Sound For A Quiet Place: (11:44) This is a nice feature that focuses on the sound design. Sound is actually a pretty remarkable deal here and handled differently could have been a serious liability. Instead there’s a lot of care here, and it’s interesting to meet the sound design and editing crew and get their perspectives on the work.

A Reason For Silence – The Visual Effects Of A Quiet Place: (7:33) Obviously this feature is going to focus on the creature design. The ILM guys talk about designing and creating those creatures. There’s some pre-viz, storyboards, and models to look at here and see the evolution of the creatures and the logic behind the design.

The creature design is pretty cool. They look like a cross between something H.R. Giger might have developed crossed with the bugs from Starship Troopers. It’s an engaging design, and Krasinski does a reasonable job of not revealing too much too quickly. Throw in some creepy atmosphere and a sweet sound design, and the next thing you know, you end up with a pretty good horror movie even with the annoying modern mistakes. There are even a few subtle moments that demand you actually pay attention to this one. I’m not going to spoil your hunt in these pages. So that means you’ll need to “Stay silent. Stay alive.”

Gino Sassani is a member of the Southeastern Film Critic's Association (SEFCA). He is a film and television critic based in Tampa, Florida. He's also the Senior Editor here at Upcomingdiscs. Gino started reviewing films in the early 1990's as a segment of his local television show Focus. He's an award-winning recording artist for Omega Records. Gino is currently working on his 8th album Merchants & Mercenaries. Gino took over Upcomingdiscs Dec 1, 2008. He works out of a home theater he calls The Reel World. Favorite films: The Godfather, The Godfather Part II, The Body Snatcher (Val Lewton film with Karloff and Lugosi, not the pod people film), Unforgiven, Gladiator, The Lion King, Jaws, Son Of Frankenstein, The Good, The Bad And The Ugly, and Monsters, Inc.
Charlie’s Angels (2019) (Blu-ray) Bombshell (Blu-ray)