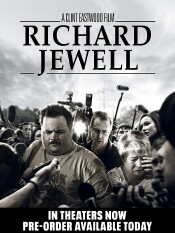 “There’s a bomb in Centennial Park. You have thirty minutes.”

Clint Eastwood is about to hit 90, and there are no signs that it’s slowing him down. Last year he even returned to the front of the camera for The Mule. Now he’s back as just the director, and it appears that Eastwood has found two of his favorite subjects in one film. He’s always been attracted to the isolated man. If you look back at the men he himself has portrayed over the years, they were misunderstood loners. In recent years he has taken a bit of a shine to telling true stories that usually deal with unlikely heroes who are thrust into a dangerous situation and must act. Heroes like Chris Kyle in American Sniper, airline captain Chesley Sullenberger, the WWII heroes who raised the iconic flag at Iwo Jima in Flags Of Our Fathers, and the brave ordinary tourist who stopped a terrorist attack on a passenger train in The 15:17 To Paris. These heroes always pay a price for their actions, and often they are even persecuted for what they’ve done, as in the case of Sully. Eastwood has combined that true story and unlikely hero for his latest work, Richard Jewell. It’s a cautionary tale that is worth watching, particularly in an age where we are constantly told that if we see something, we must say something. After watching Richard Jewell, you might just experience a potentially catastrophic hesitation. And who could blame you?

Paul Walter Hauser is perfectly cast as Richard Jewell. He lives in Atlanta and wants nothing more than to be a police officer. He wants very badly to protect people. Working in the mailroom of a law firm, he befriends one of the lawyers named Watson Bryant, played equally well by Sam Rockwell. Watson is impressed at Jewell’s kindness and his powers of observation. He fills his office needs before they’re asked for and even notices Watson’s penchant for Snickers candy bars and keeps his desk supplied with the treats. But Jewell is only there until he gets the chance to live his dream, and it comes in the form of a job as a college campus security guard. His ambition there leads him to go too far, and he’s quickly fired. Over the years he manages to snag police and security positions but never holds them for long. Finally his big opportunity to shine arrives in the form of the Centennial Olympics coming to Atlanta in 1996.

Jewell applies his usual over-ambitious style to the gig and is honestly a bit of a joke to the police on the Olympic Park beat. When he sees a suspicious backpack, he alerts the other authorities, who at first don’t take Jewell or the threat seriously. When he pressures the cops to act, a bomb expert arrives and finds it really is an explosive. Jewell and the officers attempt to clear the blast area and manage to save hundreds of lives. It wasn’t a complete success; the bomb threw nails as shrapnel that killed two and injured hundreds. Suddenly Jewell is exactly what he wanted to be. He’s a hero. The networks all want him on their shows, and he becomes a national celebrity.

Enter Kathy Scruggs, who works for a prominent Atlanta newspaper. She’s played by Olivia Wilde and has since been the subject of controversy. Both the paper and the actual reporter are angry because they believe she’s portrayed as a reporter who sleeps her way to information. There is a subtle reference to that characteristic, but it was just as likely said in jest by FBI Agent Tom Shaw, played by Jon Hamm. He slips her the information that Jewell has gone from hero to prime suspect, and while the two do apparently hook up that evening, it appears far more likely they already had that kind of relationship, because it happened after she already had what she wanted. The paper runs the story, and Jewell becomes the subject of far more attention. This time the world thinks he bombed innocent people at an Olympics celebration, and his life is turned upside down.

The feds attempt to use his police aspirations to try to interview him under the false pretense they are creating a training video. Fortunately Jewell has the presence of mind to eventually call on his old friend Watson, now running his own office without a lot of business. He doesn’t believe Jewell did the crime, and his fondness for the man brings him in to aggressively defend his new client. The problem is that Jewell doesn’t completely know how much trouble he’s in and treats these investigators like the law enforcement brothers he believes them to be. Watson can see them laughing at him, and it hits a bit of a raw nerve.

It all turns into a circus with Jewell’s mother Bobi (Bates) trying to stand by her son even as police remove a lot of stuff from their home, including her beloved Tupperware and even her panties. Jewell’s stuck in a nightmare from which there appears to be no way to wake up.

Of course, eventually the cops realize they can’t find any evidence, and even Agent Shaw has to finally let go of the case even though he still believes Jewell is guilty. He finally gets a letter that officially drops him as a suspect, but that didn’t get a lot of attention. Jewell died in 2007 of a heart attack that Eastwood appears to foreshadow here.

Richard Jewell is presented in its original aspect ratio of 2.39:1. The 1080p image is arrived at with an AVC MPEG-4 codec at an average 30-35 mbps. The high-definition image presentation is a wonderful nod to Clint Eastwood, who remains the last link to the Hollywood of the past. The shoot took advantage of a full 4K intermediate. The image looks quite natural throughout and does a wonderful job with natural light sources that continue the natural feel. Colors don’t pop or stand out, but pull you into a very realistic experience. Black levels allow for fine shadow definition and close-ups of characters provide reference skin tones and detail.

The DTS-HD Master Audio 5.1 is pretty much there to serve the dialog. Eastwood is known for his minimalist scores, and this film is no exception. The music is as simple as a few piano notes that set mood and atmosphere and then disappear as far into the experience as it can. The subs come alive during the bomb explosion, and of course the surrounds become a little more aggressive amidst the chaos of that moment. The rest of the audio presentation remains simple and direct.

The Making of Richard Jewell: (6:57) The focus of this behind-the-scenes feature is on Clint Eastwood himself. Cast and crew offer their praises. There’s a little time spent on the production design and the original Atlanta locations, but the conversation always comes back around to Clint.

The Real Story of Richard Jewell: (6:39) This isn’t really a documentary. Cast and crew talk about the late Jewell, and that centers on the desire to make sure people remember correctly that he was the hero he at first appeared and the true bomber was indeed eventually caught. In addition to the cast and crew you get to hear from the real Bobi Jewell, Richard’s mother, and Watson Bryant, his attorney and friend.

For all of the heat he’s taken from various parties, Eastwood should proudly stand behind his work here. It’s not one of his best by any stretch of the imagination, but it’s a film that has an impact, to be sure. I’ve learned from fellow critics that most remember Jewell and his being a suspect. I’m surprised how few remember that he was eventually exonerated when the actual bomber surfaced and eventually confessed. That story didn’t get a fraction of the play Jewell’s time as a suspect got. It’s just not juicy enough, and that’s a problem. Someone once said, quite correctly, that the United States has the very worst justice system in the world … except for all of the others. There are flaws, and Eastwood lets the actors tell the story. There aren’t a lot of director fingerprints here. Eastwood puts his resources to good use, and that’s likely why he continues to succeed even in his 90’s. He works smart and hard. Now Eastwood might have helped to undo an injustice and remind the world who never knew or who might have forgotten: “Richard Jewell is an innocent man. He’s a hero.”

Gino Sassani is a member of the Southeastern Film Critic's Association (SEFCA). He is a film and television critic based in Tampa, Florida. He's also the Senior Editor here at Upcomingdiscs. Gino started reviewing films in the early 1990's as a segment of his local television show Focus. He's an award-winning recording artist for Omega Records. Gino is currently working on his 8th album Merchants & Mercenaries. Gino took over Upcomingdiscs Dec 1, 2008. He works out of a home theater he calls The Reel World. Favorite films: The Godfather, The Godfather Part II, The Body Snatcher (Val Lewton film with Karloff and Lugosi, not the pod people film), Unforgiven, Gladiator, The Lion King, Jaws, Son Of Frankenstein, The Good, The Bad And The Ugly, and Monsters, Inc.
Bombshell (Blu-ray) Jumanji: The Next Level (Blu-ray)