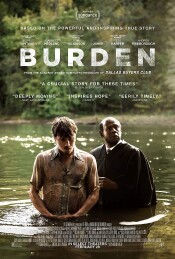 Based on a true story, Burden shows how one town’s African-Americans fight back against racial prejudices brought on by the local Ku Klux Klan.  The film is well written by Andrew Heckler and has a fine cast that makes their characters believable.  Largely unknown, the historical incident was brought to light by New York Times writer Rick Bragg on November 17, 1996.  The heart-wrenching story shows how one town fought back to free itself from a racist act. Tom Griffin (Tom Wilkinson) and his ward Mike Burden (Garrett Hedlund) decide to reopen the abandoned movie theater as a museum for the KKK in the center of their small town of Laurens, South Carolina in spring of 1996. It’s an act of pride for the hooded organization and yet an obvious planned affront to half the population of the county. But Griffin owns the property, and his long-time membership in the KKK has brought him to the racist decision. The local preacher Reverend Kennedy (Forest Whitaker) is up in arms over the audacity of Griffin’s venture and starts to gather his flock to protest the museum.

In the meantime Mike Burden has been working for Plantation Repo, repossessing things like TVs and stereos from the local folks who have not been keeping up with their payments. One of them is single mother Judy (Andrea Riseborough), who gives Mike a lot of grief over taking her TV, but he sort of takes to the woman and decides to help her.  They start a relationship and become a couple.  But Judy is not prejudiced, and she befriends neighbor Clarence Brooks (Usher Raymond IV), a hard-working African-American. Working for Tom Griffin, Mike Burden gets called on to help stop the protest by Reverend Kennedy. When he’s told to do something violent and refuses, it turns Griffin against his former ward.

The film goes on from there, showing the clash between the KKK and Reverend Kennedy’s churchgoers.  Director and writer Andrew Heckler does a good job of suspense buildup and the show of racism in the small town. His actors are convincing as they clash over legal rights vs. human dignity.  The power of the film certainly shows how important the incident was to the history of civil rights and the shrinking power of the KKK.

Of the major cast, both Forest Whitaker as the unbending Reverend and Garrett Hedlund, playing the change-of-heart citizen, make the film work.  Also on the top of his game is Tom Wilkinson, who plays the tough and scary KKK leader who has a racist tone that will make you cringe.  The three actors are superb and worth watching for their amazing performances.

Burden has been rated R by the MPAA for disturbing violent content and language throughout including racial epithets. A very good depiction of a heartfelt and unyielding happening in American history.

John Delia has been on all sides of the movie business from publicity, writing for publications and on line blogs, script writing, to film making. Writer, critic, film editor he has worked as a film critic on this second go around for 14 years. He earned his Bachelor’s degree at the college of Journalism and Communications at the University of Florida in Gainesville, Florida. John is an active member of the Southeastern Film Critics Association (SEFCA) . Favorite Films: Lord of the Rings/Hobbit trilogies, The Godfather trilogy, the Indiana Jones trilogy (I didn't like the 4th), The Avengers and for TV it's Game of Thrones. As for animation it's a tie between anything Pixar and everything Hayao Miyazaki.
A Hidden Life (Blu-ray) Spies in Disguise (UHD Blu-ray) (4K)