Posted in: Disc Reviews by Jeremy Butler on March 26th, 2020 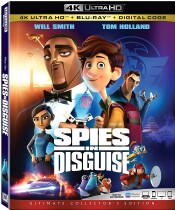 “This is a vile waste of taxpayer dollars.”

Will Smith and Tom Holland team up for an animated spy movie; talk about a draw for the crowd. This premise alone was enough to get me and my daughter drawn into the movie. Of course there is a bit more to it, as it also involves Will Smith’s character being accidentally turned into a pigeon. An interesting twist of fate, but honestly, I think it would have been great if it just stayed a straight spy film, without the pigeon addition. Not to say that the film wasn’t still a success with this addition, because as it is the film tackles a very critical subject matter: the use of violence. Who said that a feature film can’t impart an important life lesson, especially with a younger audience? Granted, I did have to spell it out a bit for my daughter, but she’s eight; what are you gonna do? In addition to Smith and Holland, who is making a name for himself in the world of voiceover animation, the cast is rounded out with familiar faces, or should I say voices, such as Ben Mendelsohn, Karen Gillan, Rashida Jones, Reba McEntire, and DJ Khaled.

Lance Sterling (Smith) is the world’s greatest spy, and he knows it. When his last mission doesn’t go according to plan due to modifications to his gear, he manages to complete the mission but intends to have a few words with certain scientist. Enter Walter Beckett, a boy genius working at the agency of HTUV (Honor, Trust, Unity, and Valor). Believing that there is a better way to accomplish mission than with lethal gadgets, Walter attempts to bring Sterling around to his way of thinking, which ultimately only leads to the top agent firing him. Before this can be made official, however, Sterling finds himself under suspicion when the attack drone that he was sent to retrieve goes missing and he is a main suspect for the theft.

Forced to go on the run, Sterling seeks out Walter to help him disappear. “Disappear” is the operative word, as Walter has actually been working on a biochemical that would allow a subject to disappear. Sterling inadvertently drinks the compound, which Walter was testing on a pigeon feather. This results in Sterling being transformed into a pigeon. Before, Walter can compose an antidote, HTUV storms his home and the two are forced to go on the run. His troubles are doubled by the fact that not only is he perceived a traitor and being hunted by his own agency, but he is now a pigeon, Sterling remains determined to clear his name and recover the weapon, which is in the hands of a technology-based terrorist with a bionic arm. The bionic arm is a bit on-the-nose, but still there something to be say for playing into certain tropes.

This was a very enjoyable film for Nalyce, who really liked Smith’s character. She hasn’t progressed to the stage where she can name a actor based off their voice (this aspect of her training will come at a later date), but she was able to register Smith’s voice as familiar, and when she was shown a picture of him, she instantly recognized him from our Fresh Prince marathons. Back on topic, she found Smith’s character to be very cool but a little mean. This in my opinion is an astute observation for an almost- eight-year-old. Though Sterling starts off as callous in the way he treats his underlings, namely Walter, he does warm as the film progresses, providing his character with the most significant story arc. Holland’s Walter is the moral center for the film as he advocates for a different approach to how the agency conduct its operations. Albeit naïve and impractical in real life, in this context it was very moving. I especially am grateful that it allowed me to impart a valuable life lesson on to my daughter.

I found the film to be very enjoyable, and though I believe it would have been just as good without the pigeon angle, I still see that this route did serve a purpose in regards to teaching Sterling humility, as well as providing a created a situation where Smith’s character was forced to rely on Holland’s character. Perhaps it’s the adult in me, but the inclusion of the pigeon angle just felt silly to me. I grasp that this is a kids’ movie, and I support the manner in which the film unfolds, it was just a hard obstacle for me to overcome. At odd intervals, I found myself thinking: “He’s a pigeon.” Despite my own internal issues, I thoroughly enjoyed the film as a whole; Smith possesses the same swagger as an animated character that he does in his live-action movies. Holland has a voice that just seems made for animation, which given that his last three movies have been voiceovers (here, as well as Dolittle and Onward) suggest that Hollywood agrees with my assessment.

Spies In Disguise is presented in its original aspect ratio of 2.39:1. The ultra-high-definition 2160p  image is arrived at by an HEVC codec with an average bitrate of 45-50 mbps. The ultra-high-definition image presentation gives you a pretty solid reproduction of the computer-generated film. There is a nice amount of detail, from freckles on a character’s face to the thin black lines of Will Smith’s pigeon character. The feathers also offer a nice example of some finer texture elements. Black levels are nice and deep with wonderful shadow definition. The HDR-enhanced colors offer not so much bright but very deep colors. Reds are an excellent example, and the deep burgundy richness comes through quite nicely. Colors are much more vivid during the film’s rather brilliantly colored climax. There is some nice depth of field which carries over from the 3D presentation in some theatres. There’s a good sense of space and object placement.

The Atmos track defaults to a pretty nice 7.1 mix. The surrounds do a better than average job of pulling you into the action. Surrounds offer the expected punch in the active scenes but do a nice job of handling the subtle stuff. There’s a drone that figures prominently here, and it offers the most perfect 360-degree sound field I’ve heard in an animated film. Subs deliver the goods when the action gets big, and the score delivers those emotional swells when called to do so. The dialog cuts through cleanly with near-perfect placement.

Infiltrating Blue Sky Studios (09:11): One of Nalyce’s favorites, a behind-the-scenes featurette that covers the animation aspects wrapped in the gimmick of infiltrating the studio responsible for the look of the film.

Top Secret Guide to Gadgets (03:57): “Spies need gadgets.” Curious about the tech you saw in the film? This in-depth featurette gives you the rundown on all the tech needed to be a top agent of HTUV.

Music Videos (03:24): The theme song of the movie. This extra inspired Nalyce to jump up and dance.

Freak of Nature Music Video (03:45): Another music video that treats the audience to a behind-the-scenes look at the creation of the song. Catchy, but I preferred the other song.

Making Of (01:24): A really brief chat with the artist that created the film’s theme song. In my opinion you get more out of the music video.

Spies in Disguise is a fun film that I encourage parents to watch with their kids. Especially given how things around the world are going and since opportunities for outside activity are now limited, what better alternative than to kick back and enjoy a family-friendly movie with the kids from the confronts of your own home. I’m know I’m glad for this; the family is going a bit stir crazy, and this at least allowed us the chance to escape into a fantasy world for a bit. Even if it did include pigeons.

Jeremy Butler is a film school graduate of the International Academy of Design and Technology. He is been writing for Upcomingdiscs since 2012; however, movies have played a big part of his life for much longer. Favorite genres include horror, science fiction/fantasy, and comedy. Favorite movies are V for Vendetta, Boondocks Saints, Kiss Kiss Bang Bang, and The Godfather.
Burden (2020) 1917 (UHD Blu-ray) (4K)