Posted in: Disc Reviews by Brent Lorentson on March 25th, 2020 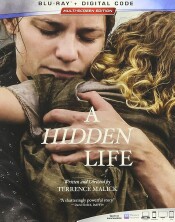 It’s hard to believe as a cinephile that Terrence Malick isn’t a more celebrated director.  Sure, he has his fans, but his films virtually never translate to box office success, which is a bit of a shame.  His past few films have managed to sneak into movie houses and disappear with little to no fanfare. Honestly, I was a bit surprised to realize how many films Malick has managed to release since the release of The Tree of Life. I understand how most will look at his films and say they are “pretentious” or even “boring”. To be fair, his films are not for everyone, but the one thing I think anyone can take away from his films is that they are each visually stunning.  Malick doesn’t simply make your typical tent pole adventure film. Instead they all have a tendency to be contemplative and have a more spiritual or philosophical message.  When it comes to A Hidden Life, he delivers just that, and while I’d consider labeling this one of his better films, its nearly-three-hour running time has this film feeling as though it’s overstayed its welcome.

A Hidden Life follows Franz Jagerstatter (August Diehl), an Austrian farmer who is called upon to fight with the Nazis in World War 2.  We get to go along with Franz as he goes into training to be a soldier, but quickly we see how he wants to be no part of it; he’d rather be back at home on his farm with his wife and three kids.  It doesn’t take long at all to get that Franz is a good guy who holds firmly to his beliefs, but is he willing to make the sacrifice of remaining true to himself and his nature by continuing to refuse to fight and not pledge loyalty to Hitler?  Franz understands the consequences of his actions, and the film follows Franz and his family as it stretches over four years till he is finally faced with the ultimate decision of life or death. The plot is so simple, but Malick isn’t trying to tell a compelling story but rather film the experience of making such a difficult decision.  We see the pain and turmoil that Franz and his family endures over the years, from Franz and his physical and emotional confrontations with Nazi officers at the prison, to the struggles Fani (Valerie Pachner) encounters at the farmhouse.

The first hour of the film is easily the strongest of the film. Seeing the simple yet sweet relationship between Franz and Frani is bittersweet.  Despite them living a simple life, the two seem to be happily in love and do what they can to be great parents. Just like we saw in Tree of Life how Malick was able to capture these simple yet intimate moments in life with the family, he’s managed to do the same here but with the beautiful Austrian countryside as his backdrop.  What he also manages to capture is the monotony of their life as we get numerous shots over the course of the film as the Jagerstatter family is tending the fields.  Sure, you could trim these shots to help with the pacing of the film, but in doing so it would take the viewer out of the day to day life of this family.  There’s a lot that could be cut, but in doing so it would impact the final result of the film.

One thing that left me impressed more than anything was the cinematography in this film. I‘ve got to say that 2019 released some of the best looking films ever put out, and this goes right alongside those titles.  Each and every shot is beautifully composed as though we are seeing a living work of art.  Of course we get the standard tree shots that Malick is best known for, but there are some stunning visuals along the countryside that are simply breathtaking and a reminder to how grand Mother Nature can be. Paired with the visuals is the score from James Newton Howard. It’s difficult to not be moved by certain moments in this film that are simply score and visually driven.  It helps immerse the viewer and contemplate this decision that Franz is being forced to make.  It seems easy, but the film helps us understand the conviction in Franz’s heart without having melodramatic speeches.  In light of the current events, you have to wonder how much Malick is trying to make a political statement with his film. Considering how long he’s worked on it, perhaps making a comparison is reading too hard into the film, but that’s part of what makes cinema art, where the viewer can take away their own message and meaning whether intended or not.

A Hidden Life is presented in the aspect ratio 2.39:1.  The 1080p image is arrived at with an AVC MPEG-4 codec at an average of 29 mbps.  As expected from a Terrence Malick film, we are treated to some beautiful imagery; just about every shot composed in this film is a work of art. The color palette when we are at the farmhouse seems a little washed out, where in contrast when we move to the Nazi prison, color is stripped away, and it’s warmer. For fans of Malick’s work, this film is a visual treat that we haven’t gotten to see from him since his work on Tree of Life.  While the film may not be for everyone, the imagery is some of the best presented in the past year.

The DTS HD-Master Audio 5.1 track is subtle. Despite the film’s epic visuals, the audio mix is filled with whispered voiceover and the use of ambient sound.  It’s the silence that stands out. There are long periods of the film where it goes without dialog, and it’s the visuals that drive the film with the aid of the beautiful score from James Newton Howard. With the mix, as I said, it’s the subtleness you’ll notice, for instance listening to a scythe being used in the fields. Its rhythmic nature helps lure the viewer into almost a meditative state, and for some a sleep state.

While I love the film and can appreciate the technical achievement of the film, it’s hard for me to simply recommend this to the casual filmgoer.  This film is asking for more patience and contemplation than most are willing to offer, especially during a global pandemic.  For those who enjoyed The Tree of Life, The Thin Red Line, and The New World, this is one I highly recommend.  If you’re looking for a fast-paced action film, then you’ll definitely want to give this a hard pass.  But for those of you who are willing to give a film a chance and experience something that’s different from your standard Netflix or other streaming service release, A Hidden Life has a lot to offer.

Brent Lorentson is a horror writer and film critic based out of Tampa, Florida. With a BA in Digital Film, he co-wrote and co-directed Scavenger Hunt. His short stories have appeared in various horror anthologies. In 2019 his short script Fertile Blood will be a part of the anthology horror film Slumber Party. He is currently working on his first novel A Dark and Secret Place set to be released in late 2019. Favorite Films: Taxi Driver, Fight Club, I Saw the Devil, The Wild Bunch, Dawn of the Dead, A Clockwork Orange, Pulp Fiction, Heathers, The Monster Squad, and High Fidelity.
Jumanji: The Next Level (Blu-ray) Burden (2020)