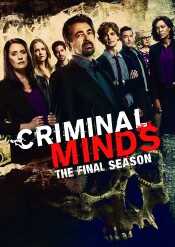 To the point, Criminal Minds is very compelling television. Ever since The Silence of the Lambs and perhaps long before, we have been fascinated by serial killers and the profilers who try to get inside their heads. To see evidence of the continuing trend, one needs only look toward the success of shows like Dexter. Of course, serial killers are not the only prey this FBI team pursues, but they are certainly the marquee item on the agenda. To be sure, there are equally disturbing subjects such as arsonists, bombers, kidnappers, and rapists to give the show a touch of variety, but let’s face it, it’s the killers that keep us tuned so attentively to Criminal Minds. But now after 15 seasons the series has come to an end, and we realize it wasn’t just the murderers we’ve been tuning in to see. The characters have become like a little family, and their stories were just as compelling over the years. Now Criminal Minds finishes with a brief 10-episode final run, and it’s out on DVD from CBS Home Entertainment.

It’s tough to wrap up a story that has taken this long to tell. The season moves away from the usual standalone killers and cases and brings back one of the more infamous bad guys from previous years. The Chameleon is Everett Lynch, and he dominates the final ten episodes. The vehicle works because having a known element as the chase, the show can dedicate more time to finally giving these characters those final emotional beats to satisfy the fans before it all comes to an end. The final scenes have one of the cast members about to move on. I won’t spoil it for you here, but that goodbye scenario allows the show to say its own goodbye to the fans who have watched the show for 15 years and saw two spin-offs end with hardly a whimper.

The show ends with one of the better finales that really has us able to believe these characters and their cases are still going on out there in fiction-land. There’s no attempt at shock or being too stylish. There’s no Sopranos gut-shot to he fanbase. It’s emotional, but that doesn’t slow down the drama that continues right up to the end.

The 3-disc set contains all 10 episodes and sadly only two short features. One asks the crew to reveal what their “soul photo” from the show might be, and another is a final look at these last episodes. The show will be missed, and I honestly hope they don’t try another version. I’d rather we remembered the show for the quality of writing and production as we saw for 15 years here. There were 323 episodes in those 15 years, so let the binge watching begin. “Well, Will totally has the sleepover covered.”

Gino Sassani is a member of the Southeastern Film Critic's Association (SEFCA). He is a film and television critic based in Tampa, Florida. He's also the Senior Editor here at Upcomingdiscs. Gino started reviewing films in the early 1990's as a segment of his local television show Focus. He's an award-winning recording artist for Omega Records. Gino is currently working on his 8th album Merchants & Mercenaries. Gino took over Upcomingdiscs Dec 1, 2008. He works out of a home theater he calls The Reel World. Favorite films: The Godfather, The Godfather Part II, The Body Snatcher (Val Lewton film with Karloff and Lugosi, not the pod people film), Unforgiven, Gladiator, The Lion King, Jaws, Son Of Frankenstein, The Good, The Bad And The Ugly, and Monsters, Inc.
Dolittle (2020) (UHD Blu-ray) (4K) Madam Secretary The Final Season