Posted in: Disc Reviews by Jeremy Butler on April 14th, 2020 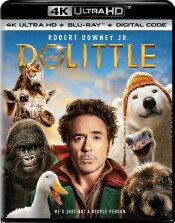 “There once was a peculiar doctor known for his extraordinary ability. He could talk to animals. Dr. Dolittle’s reputation spread far and wide. Even the Queen of England called on him. So grateful for his help, she gifted him a wondrous sanctuary, whose doors were opened to all creatures. His days belonged to the animals, but his heart belonged to one woman. Lily, the fearless explorer. They traveled the globe going on great adventures. Defending creatures who could not defend themselves. They made an extraordinary team. Soon, that team became a family. With Lily by his side, Dolittle never felt more alive. Until one day she left on an adventure. Lily died at sea. Heartbroken, he locked the gates of the manor and completely retreated from the world. As for me, and the animals whose lives he’d saved, we were left to wonder, could anyone save his?”

Well, it didn’t take long for Robert Downey Jr. to line up his next project following his iconic Marvel run. And there is definite franchise potential with this film about quite possibly the most famous veterinarian ever written. Primarily inspired by Hugh Lofting’s The Voyages of Doctor Dolittle, the film is likely anticipated to be a reboot to the Eddie Murphy-led film franchise of the same name (except with a “Dr.” in front of the name). Interestingly enough, the film’s inspiration is actually the second book written by Lofting about this famous character with the gift of talking to and understanding animals.

Continuity aside, the film features a cast of verifiable talent including Michael Sheen and Antonio Banderas; rounding out the voice cast is Tom Holland (his second voicing acting role, proceed by Spies in Disguise with Will Smith, and to be followed by the upcoming Onward with Chris Pratt), Emma Watson, Rami Malek, Octavia Spencer, John Cena, Ralph Fiennes, Marion Cotillard, and the list goes on. Seriously, there are at least five more I could have named. With a cast like this, you can only expect an enjoyable experience, and that is exactly what this family-friendly adventure delivers.

Seven years after losing his wife in a tragic shipwreck, eccentric veterinarian John Dolittle (Robert Downey Jr.) has withdrawn from the world. Becoming a hermit, he has closed his practice and opted to communicate only with the animals housed at Dolittle Manor. Believing humanity will never change, he prefers the company of this menagerie, which includes an anxiety-ridden gorilla (Rami Malek), a perpetually cold polar bear (John Cena), and a temperamental ostrich (Kumail Nanjiani), as well as a macaw (Emma Watson) who acts as the doctor’s moral compass. His self-imposed exile is shattered by Tommy Stubbins (Dunkirk’s Harry Collett), who brings a squirrel he accidently shot to be treated by the doctor.

Simultaneously, Queen Victoria falls gravely ill, and her child ward, Lady Rose (Carmel Laniado) shows up at Dolittle Manor to enlist the doctor’s services and cure her. Reluctant to get involved until enlightened by the knowledge that the manor will be seized by the crown upon the Queen’s death, Dolittle embarks on an epic adventure to retrieve the only thing that will cure the Queen. A voyage that is bittersweet, as it is the same voyage that cost his beloved wife her life.

This is a vast departure from Eddie Murphy’s version, but more in line with the 1967 version of the film starring Rex Harrison, in regards to setting and characters. That, however, is where similarities likely end. Though loosely based on the aforementioned novel, the overall story charts its own path, so to speak. This in my opinion is in the film’s favor, as it allows a level of originality to exist and avoids any stigma related to previous adaptations. The story is easy to follow and infused with multiple avenues and characters to provide comedic relief. The interactions between Downey and the macaw are a great source of laughs, especially when Dolittle attempts to assert authority only to be circumvented by logic and persuasive arguments.

Robert Downey Jr.’s performance as Dolittle is reminiscence of his Sherlock Holmes performance; both are gruff, dirty, eccentric social pariahs, and it is their keen minds and abilities that make them invaluable. This merely required Downey to dust off an already polished persona; however, for the context of this film, it is well received. Adding to the character development is the tenderness that Dolittle shows to his animals, which goes a long way towards furthering the plot of the film and developing supporting characters.

The voyage is packed with adventures that include a daring heist to retrieve a clue that will help solve the film’s central mystery. Entangled in this subplot is the key to Dolittle’s sorrow as well as the path to his own redemption. Aided by Banderas, this serves as the film’s emotional arc and turning point. Sheen is the typical villain, though his motivations are bit lacking. That aside, he and Downey play off each other well enough. Speaking of chemistry, Collett holds his own against the veteran Downey, establishing his character in a manner that I can see his character following in the great doctor’s footsteps. The best performance, however, come from the voice cast, as Malek’s character overcomes obstacles, and Nanjiani and Cena have an excellent back-and-forth.

Dolittle is presented in its original aspect ratio of 1.85:1. The ultra-high-definition 2160p  image is arrived at by an HEVC codec with an impressive average bitrate of 60 mbps. This is certainly a stylistic film, and the ultra high definition image presentation goes a long way to bring that style to life. Colors are incredibly vivid with bright blues and reds dominating the color presentation thanks to a heart HDR and Dolby Vision. The jungle scenes deliver wonderful shades of lush green. The film was shot in 8K, but the intermediate is only 2K, so there’s a bit of a good news/bad news thing going on here. You won’t find any fault in the colors. The textures show off in costumes and some of the fine computer-generated animals in the mix of things. Fur and feathers are delivered with convincing detail and texture. Black levels are quite deep and allow for some fine shadow definition.

The Atmos track defaults to a pretty solid 7.1 mix. The surrounds are quite immersive throughout. It doesn’t matter if we’re in a jungle with the nuanced rush of breeze and far-off animal sounds or onboard a ship with creaking timbers and rope lines. There’s always something engaging going on all of the time. Danny Elfman delivers another atmospheric score, and it’s reproduced with fine results here. The subs aren’t quite the level I was hoping for, but they work to build depth to things like Barry’s rich and deep voice. Dialog cuts through at all times.

The extras are all on the Blu-ray and UHD copy of the film. The UHD extras are in 4K.

A Most Unusual House: (3:57) This feature goes behind the scenes at Dolittle’s home and all of the Rube Goldberg devices.

The film faces steep competition at the box office with the long-awaited third film of a popular franchise, but I wouldn’t count it out for the title of box office winner. Not to mention the likelihood of the film to spawn a franchise of its own. There was never any doubt that Robert Downey Jr. would land on his feet after Avengers: Endgame (if I spoiled the ending for anyone, it’s your own fault; you should have seen the film ages ago); I merely expected a run of independent films to re-establish his bonafides, but then again his resume is already well established.

Jeremy Butler is a film school graduate of the International Academy of Design and Technology. He is been writing for Upcomingdiscs since 2012; however, movies have played a big part of his life for much longer. Favorite genres include horror, science fiction/fantasy, and comedy. Favorite movies are V for Vendetta, Boondocks Saints, Kiss Kiss Bang Bang, and The Godfather.
Little Women (Blu-ray) Criminal Minds: The Final Season