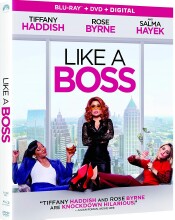 Here comes the ultimate comedy about a codependent relationship; however, though that may not sound that good, in this film it is very entertaining thanks on no small part to Tiffany Haddish and Rosa Byrne. Haddish and Byrne play Mia and Mel respectively, two independent women with their own cosmetics storefront. Though their line is very popular, their revenue does not reflect their popularity due to an inability to mass produce, causing them to fall into deep debt and in danger of losing their store. Then along comes a spider in the form of Salma Hayek’s Claire Luna, the head of a internationally successful cosmetics conglomerate that offers to invest into their company. Haddish and Byrne are both well established in the comedy genre, but the combination of the two made for one the best comedy experience that I’ve had this year. My wife kept telling me that I would enjoy the film (this was one of the rare occasion where she went to a movie unaccompanied by me), but given our different taste cinema-wise, I was expecting a film full of cliché, especially given that it seem like the entire film was given away in the previews. Well, honey, let me say for the record that you were right.

An important focal point of the film is the importance of friendship, and it is displayed among multiple characters throughout the film, but none more prominent than with the two main characters. The backstory that Mia’s family essentially adopted Mel as a child due to her mother being unfit went a long way towards building the relationship between the two characters, as well as explaining the dynamic between the two that carried on in later years. Basically, Mel has great loyalty to Mia for what her family did for her as a child; that causes her to act as the more responsible of the two. This is evident in the opening scene at their storefront where she resigns herself to cleaning up Mia’s messy workstation for what is clearly not the first time. Mia, though she does value Mel immensely, does tend to put the responsibilities of managing their business on Mel, while she focuses more on enjoying herself.

The establishment of this dynamic is what helps further the plot, as it provides the necessary cracks in the foundation for Hayek’s character to exploit later on. Speaking of Hayek’s Claire Luna, it is clear from the very beginning what her endgame is, but the manner in which she goes about driving a wedge between Mia and Mel is crafty and masterful. Haddish is on to Luna from the beginning, but Byrne’s character is susceptible of her manipulations, likely due to the fact that she desperately wants out of the hole that she and her partner find themselves in. Another attribute that I believe brings an air of authenticity to the film is the fact that Haddish’s character is very outspoken, while Byrne’s character as Mia puts it is “sneaky mean.” The sneaky mean attribute is shown in multiple scenes to include when she vented her frustration regarding a partygoer who belittled her business, as well as the ghost pepper scene which provided a great deal of amusement.

Rounding out the cast was Jennifer Coolidge of American Pie fame as an employee of Mia and Mel’s business. Her role is a bit downplayed in comparison to some of the actress’s other roles, specifically Sophie from 2 Broke Girls. Comparatively, in this film she lacks the normal confidence that she usually exudes. Nevertheless, she does manage to bring a degree of comic relief to the film. In stark contrast, Billy Porter’s Barrett is everything that I expected; he’s flamboyant and dispenses sage-like wisdom. His character shines in what he calls his “tragic moment.” In addition, he is the one who provides a much needed reality check to one of the central characters. Jacob Lattimore also has a cameo as Haddish’s much younger lover, which given Haddish’s comedic persona is right on the money. His time is limited, but his presence is notable. Finally, it seems appropriate that in a movie about best friends, a Friends alum also makes a surprise cameo appearance. This caught me by surprise, but as a soon as I saw her it just felt right.

In closing, I really must give it to my wife once again for her recommendation of this fine film. This was truly a quality comedy, and given that I have her to thank for this, it only feels fitting that I include what she enjoyed about the film. According to my lovely wife, what she enjoyed most about the film was the sense of empowerment. Two independent women who created a signature brand and built their own business and are their own bosses. Additionally, she was a great fan of the friendship between the main characters. It proved an important principle, which is that blood doesn’t make family. A quality critique if I have ever heard one.

Jeremy Butler is a film school graduate of the International Academy of Design and Technology. He is been writing for Upcomingdiscs since 2012; however, movies have played a big part of his life for much longer. Favorite genres include horror, science fiction/fantasy, and comedy. Favorite movies are V for Vendetta, Boondocks Saints, Kiss Kiss Bang Bang, and The Godfather.
Madam Secretary The Final Season Police Squad: The Complete Series (Blu-ray)