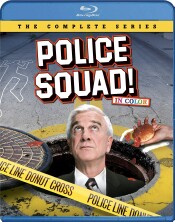 It started with Kentucky Fried Movie, which was a somewhat modest box office success mainly because of the genius of Joe Landis as director, but this game really took off three years later with the box office hit Airplane. It was a spoof of all of those Airport films we saw during the 1970’s and 80’s. They all had the same formula and were almost spoofs of themselves by the time the string ran out. The film pulled in an impressive $85 million on a measly $3 million budget. The team of Jim Abrahams along with brothers David and Jerry Zucker was born, and comedy would never quite be the same. The comedic form they developed relied on a lot of deadpan delivery of one-liners and some rather stilted wit. But it was something different, and it wasn’t really a surprise that the team would want to keep it going. A second Airplane film wouldn’t come along for a couple of years, and it would be guided by a completely new team. This trio was on to bigger and arguably better things. The first step was to land on the television screen with a police comedy called Police Squad. It was hoped the show would help capitalize on the same kind of comedy that took Airplane to the stratosphere. They would also maintain the film’s star, Leslie Nielsen. It should have been a no-brainer and an instant hit. It lasted six episodes and was gone in a hot flash. But that wasn’t quite the end of the story.

The series stared Leslie Nielsen as Detective Frank Drebin, a member of the Chicago police’s elite unit called Police Squad. His boss and partner was Captain Ed Hocken, played by Alan North. The show ran for a half-hour, and that time was filled with pretty much the same routines week after week. The show’s staple comedy came from a few limited sources. There was the vintage routine of taking a phrase literally. The backgrounds had all kinds of non-sequiturs going on through each scene, while the rest of the cast had to play it straight and pretend to not notice. Examples include a Japanese garden that has Japanese people standing in plant pots.  A building might start to collapse around the characters while they go on with their questioning without taking any notice. Two of the regular gags involved the squad’s lab tech Dr. Olsen, played by Ed Williams. Each episode would have him doing a kind of “Mr. Wizard” experiment with a young child which hinted that the doctor had “other” motives for having the children around. It’s a gag that might not fly very well in today’s culture. The second involved shoeshine boy Johnny, who was played by William Duel. Frank would come to have his shoes shined when he was stumped. For a couple of bucks Johnny would fill him in on what was going on in the street. But the gag didn’t end there. After Frank leaves, some professional from a surgeon to a firefighter and even Dick Clark would come for professional advice which Johnny would know “nothing” about until his palm was greased with cash. Then he’d have detailed suggestions on how to perform a tricky operation or explain a new trend in music to a stumped Dick Clark. It was actually one of the show’s better gags, and actor William Duel sold it brilliantly. The problem is it was the same gag every week. That’s the trouble with all of this humor; the repetitive nature of the schtick made the show grow incredibly old in just six weeks. Ratings were a disaster, and the show ended as quickly as it had begun.

One of the more amusing running gags concerned a special guest star each week. They had one per episode that included William Shatner and William Conrad. The gag was the special guest star was killed 20 seconds after they were announced and never really participated in the story. The deaths were not connected to the episode in any way.

The series was a spoof of the old Quinn Martin productions like Cannon, The Streets Of San Francisco, and The F.B.I. The use of acts, but here as gags, help to connect the shows along with the standard freeze-frame that ended Quinn Martin shows, except here the characters just stood still while other stuff went on around them. Quinn Martin dominated the police drama in those days much as Dick Wolf has the last 20 years or Steven Bochco did before Wolf.

Nielsen and the trio were not ready to quite give up on the idea. The first idea they tried was to shoot a few wraparound scenes and try to turn the episodes into a single film. They believed, correctly, that the problem with the series was the small screens of the day. They knew that the humor was so out there that a small screen didn’t give you the attention needed to catch it. It was too easy to miss a gag while you were doing other things instead of concentrating on the television. In the theatre you had a huge screen and nothing else to do, at least you didn’t in the early 80’s. So they decided to bring Police Squad to the big screen, calling it The Naked Gun: From The Files Of The Police Squad. The long title was eventually shortened to The Naked Gun.

The films followed pretty much the same idea with some different gags and the longer format. Most of the characters were recast. George Kennedy, wanting to spoof his own film series, took over for Alan North as Ed Hocken. O.J. Simpson took over for Peter Lupus with a slightly different spelling of Nordberg.

There ended up being three films in the franchise, with the television show somewhat lost to history in that time. Liking this show or not will completely depend on how much you appreciate the brand of humor the trio of executives have constantly put out. If you do, these will be gems that you’ll be happy to discover, maybe for the first time. If you don’t like that particular kind of humor ,you’ll hate this show, because it is so much more concentrated here.

The single Blu-ray disc contains all six episodes, a gag reel, interview with Nielsen, and audition footage from Ed Williams and Alan North. There are production notes and a production image gallery. With Nielsen gone, there’s little chance this franchise will ever be back. This Blu-ray release pretty much completes the entire story. “Disperse! Please, disperse! There’s nothing for you to see here. Go home. Keep moving, please. Keep moving.”

Gino Sassani is a member of the Southeastern Film Critic's Association (SEFCA). He is a film and television critic based in Tampa, Florida. He's also the Senior Editor here at Upcomingdiscs. Gino started reviewing films in the early 1990's as a segment of his local television show Focus. He's an award-winning recording artist for Omega Records. Gino is currently working on his 8th album Merchants & Mercenaries. Gino took over Upcomingdiscs Dec 1, 2008. He works out of a home theater he calls The Reel World. Favorite films: The Godfather, The Godfather Part II, The Body Snatcher (Val Lewton film with Karloff and Lugosi, not the pod people film), Unforgiven, Gladiator, The Lion King, Jaws, Son Of Frankenstein, The Good, The Bad And The Ugly, and Monsters, Inc.
Like a Boss (Blu-ray) The Gentlemen (UHD Blu-ray) (4K)