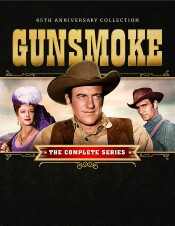 “Good evening. My name’s Wayne. Some of you may have seen me before. I hope so. I’ve been kicking around Hollywood a long time. I’ve made a lot of pictures out here. All kinds. Some of them have been westerns, and that’s what I’m here to tell you about tonight. A western. A new television show called “Gunsmoke”. When I first heard about the show “Gunsmoke”, I knew there was only one man to play in it. James Arness. He’s a young fellow, and may be new to some of you. But I’ve worked with him, and I predict he’ll be a big star. And now, I’m proud to present “Gunsmoke”.”

That was John Wayne introducing the television audiences of 1955 to Gunsmoke. Gunsmoke fans have had a long wait to get the full series on DVD, and that long wait is finally ended. If you have been picking up the seasons as they have been released along the way, sometimes in half-season sets, you only had a season remaining to complete your collection. If you waited or have become a recent fan of the classic western, another alternative has presented itself. CBS has released the entire 20 seasons in one collection. Even if you have been collecting all along, you should consider selling or gifting your single or half-season sets and opt to have them all in one place anyway. Those cases take up a lot of room on the DVD shelf, and while this collection isn’t exactly tiny, it does take up less space, with an option to store on its side where it takes up very little shelf space, but you’ll need almost 13 inches of headroom on your shelf. Even on its side it’s a good third less space than all of those cases. The design is simple and quite functional. Inside of a strong cardboard case you’ll find the 20 seasons split out over six large plastic cases. The seasons are contained in the following six groups: 1-4, 5-7, 8-9, 10-12, 13-15, 16-20. The boxes avoid those stacked spindles, a choice I highly approve of. The box is an attractive case that looks like it’s leather-bound with a panoramic color photograph of the main characters on one side. It’s open on the back, allowing easy access to the discs. If you’re facing a considerable amount of “Shelter In Place”, this is going to make those weeks fly by. There are 635 episodes. The early episodes are a half-hour; the majority are one hour each. The series is also split almost 50-50 in black & white or color. Seasons 1-11 are in black & white, while the remainder of the seasons are in color. We’re talking the original full-frame presentation. These episodes have not been monkeyed with. Subtitles show up starting with Season 5. There’s not much in bonus features. There are some production promos and vintage television commercials. There are a couple of commentary tracks spread throughout. There is a rather nice wrap-up feature on the final season. There are a few other brief extras throughout this collection that spans 143 discs. Finally, if you want to know how that all adds up, how about 440 1/2 hours? That’s going to be some binge-watching right there. It’ll make a great gift if you are already thinking about getting an early start on your holiday shopping.

You can catch our reviews for the various seasons by banging it Gunsmoke Reviews. The 20th and final season is the one I’ll tackle now.

Gunsmoke was the longest-running scripted live-action television show in history until just this year when Law & Order Special Victims Unit started their 21st season. The series ran from 1955 to 1975. It still has the most episodes of any live-action scripted shows in history with 635 compared to SVU‘s 480. You have to understand that in the show’s earlier years a series would roll out 35-40 episodes a year compared to a network average of 20 in 2019. A great number of shows air considerably less episodes in a season. At first it was a half-hour black-and-white show that evolved into a color hour by 1967. It actually started before the days of television, premiering on radio in 1952. Then it was William Conrad as the tough-as-nails Marshall Matt Dillon. When television came into its own, Gunsmoke made the jump to the bright living room box and made history. Westerns would ride across our small square screens for the next three decades, making it the most successful genre of that time, and it was Gunsmoke that started it all. The television version of Gunsmoke was originally conceived as a vehicle for John Wayne, who opted to remain in movies. Yet it was Wayne himself who suggested James Arness, and it turned out to be a career for the one-time “carrot” monster from The Thing. Gunsmoke started before all of the big westerns and was around when most of them had departed.

The final episode took the cast by surprise. James Arness was convinced the show would run at least a couple of more years. But it did end after the 20th season. Some of the highlights of that season include:

What better way to start the final season than an episode called Matt Dillon Must Die? There have been a lot of bad guys out to kill Dillon over the run of the series. Usually it’s because he gunned down some outlaw when said outlaw decided to fight. This time an old man and his sons hunt Dillon because he didn’t stop bad guys from killing wife and mother. Sympathetic killers to say the least. But they’ve got Dillon up in the mountains trapped and fighting for his own life. A gang of ex-Confederate soldiers put on the blue of Union soldiers in order to convince a town they are protecting them from an Indian uprising. That episode is appropriately enough called Town In Chains. In The Tarnished Badge, Dillon has the reluctant duty to go after a fellow lawman and friend who has been corrupted by his power. Dillon is sentenced to life in a labor camp when he crosses a crooked judge who uses the labor for his own silver mine in Hard Labor. In the two-part Island In The Desert, Strother Martin plays a character with a deadly pet snake. He would go on to star in the film Sssssss as a mad scientist trying to turn Battlestar Galactica’s Dirk Benedict into a snake. In the final episode of the series, The Sharecroppers, Festus ends up a slave for a family after he tried to do the right thing. He accidentally shot the man in the leg and just wants to get him back to his family. No good deed goes unpunished was the lesson of quite a few of the show’s episodes.

The complete series is something that you’ll have around for generations. It’s a great way to spend time with family and look at a simpler time. You can pick up just the 20th and final season or help yourself to 143 of Gunsmoke. The choice is yours. “A little’s a little, and a lot’s a lot, there ain’t no little lot, or lot of little, don’t you see?”

Gino Sassani is a member of the Southeastern Film Critic's Association (SEFCA). He is a film and television critic based in Tampa, Florida. He's also the Senior Editor here at Upcomingdiscs. Gino started reviewing films in the early 1990's as a segment of his local television show Focus. He's an award-winning recording artist for Omega Records. Gino is currently working on his 8th album Merchants & Mercenaries. Gino took over Upcomingdiscs Dec 1, 2008. He works out of a home theater he calls The Reel World. Favorite films: The Godfather, The Godfather Part II, The Body Snatcher (Val Lewton film with Karloff and Lugosi, not the pod people film), Unforgiven, Gladiator, The Lion King, Jaws, Son Of Frankenstein, The Good, The Bad And The Ugly, and Monsters, Inc.
Ray Donovan: The Seventh Season The Rhythm Section (Blu-ray)